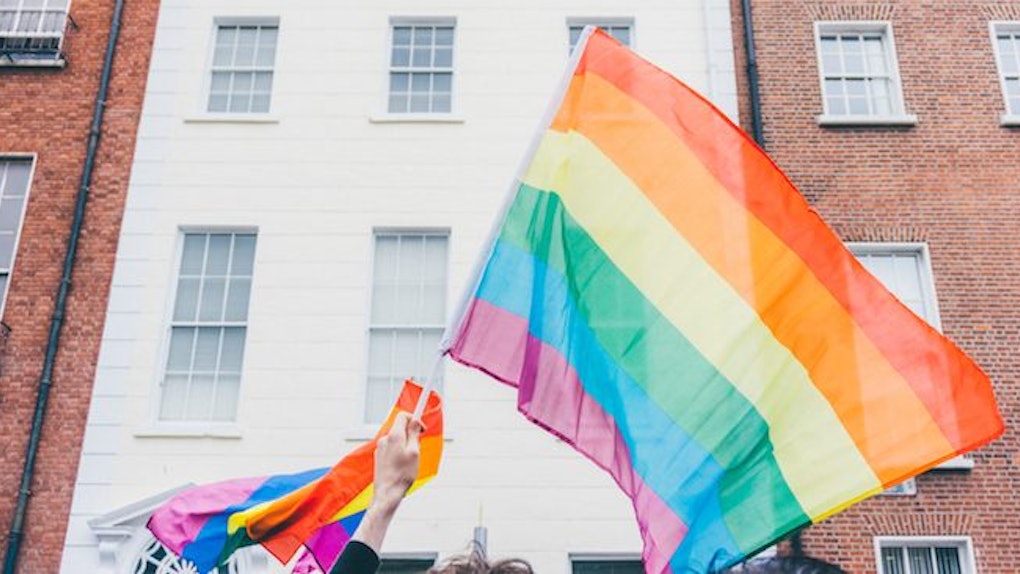 I Came Out As Queer & My Friends' Reactions Surprised Me

Until my late 20s, I wasn't totally comfortable calling myself queer.

From 19 on, I had been in exclusively hetero relationships — both long- and short-term — that followed one another nearly back-to-back. In that time, I never really investigated my attraction to other women, trans femmes, or non-binary folks.

Being hetero was comfortable; the ease of slipping into a relationship with men was something I took for granted, cloaking myself in the acceptability and privilege that was afforded those encounters.

While dating men was stressful in most of the ways that you would expect, it was the fact that it was expected that allowed me to feel comfortable, even in relationships that weren't permitting me to explore my full identity.

A few months after my last hetero relationship ended — my first with a male-bodied person who was also queer — I left town for a residency in rural Wyoming. My best friend, Anna, drove me to the airport.

There wouldn't be much of a dating scene in cowboy country, but regardless, we decided that this was an appropriate time to find out where we ranked on the Kinsey scale. On the drive, I read the questions aloud to Anna and recorded her answers on the internet app, and then, I took it myself.

Anna, who had been in queer relationships before, ranked something like a two — surprisingly low, we both thought. My results were even more surprising.

My responses generated a row of question marks. I broke the Kinsey scale. I didn't place as anything, anywhere. I imagined my sexual orientation as The Riddler in Batman Forever: a clownish figure in green spandex wearing Jim Carrey's malleable, rubber face.

I had always known that gender really didn't have anything to do with it. I had always been attracted to whoever made me laugh.

A few hours later, I boarded a plane for Wyoming and entered a one-month period of celibacy, during which I was completely focused on writing my novel. I got back to town just a week before Election Day, and boy, did the dating scene shut down in the depressive spell that lasted until after the inauguration.

After a few more encounters with straight men left me disappointed and unfulfilled, I decided I was ready to stop dating men and start dating people instead.

I hadn't thought that coming out to my friends would be a big deal at all. I had always assumed that everybody in my circle of artists, poets, and romantic empaths was at least a little bit queer.

Dating other women was just something that I happened to be doing. It was a piece of information about my life that I would deliver the next time we got dinner or drinks: "Oh, and by the way, I'm seeing a woman now."

I didn't plan any speeches or revelations, but I certainly didn't intend to keep it secret. I was fortunate in that I felt I had nothing to hide.

My friends were completely accepting, and in this way, their reactions were what I had expected. But there was something else in many of their responses that I hadn't: a strong curiosity.

More than one of my female friends asked me, "You're having sex with other women? What's it like?"

It wasn't my own coming out that was surprising, but that so many of them came out to me, too. More than one of my female friends in a long-term relationship with a man told me that they, too, thought they were queer, but they had never fully explored it.

When I came out as queer, my own reaction to their responses surprised me, too. As a writer, I'm anything but private. I love to overshare.

Whether on the internet or in person — or for that matter, whether anyone is interested — I'll spill about even the most embarrassing incidents.

My friends know about the time I snuck out of the house of a one-night stand after he peed in his own closet in his sleep, and they know about the time I pooped my pants on my commute home from work. But on this subject, the subject of having sex with other female-bodied people, I was hesitant to share.

I felt an emotional obligation to keep those encounters sacrosanct. I didn't want to pull them out to be gawked at or reduced, and describing the experiences in detail to anybody seemed like a betrayal of both my own intimate experience and others'.

My dates had been casual, but I almost felt territorial. "But this isn't yours to look at," I wanted to say after sharing. "Stay out."

I also felt a bit resentful of the comfort of their long-term hetero relationships and the knowledge that they could, conceivably, claim a queer identity without exiting that arrangement. This feeling wasn't exactly in line with my politics, as I definitely do not believe identifying with queerness should be based upon a person's experience.

In fact, most of my friends seemed to share in this feeling, too, and questioned whether they could call themselves queer if they were dating a man. Regardless of how politically incorrect it was, the feeling was still there.

At its root, I was resentful because I thought my experience was being viewed as a voyeuristic way for somebody else to examine her own orientation, without having to give up a bit of her safety or respectability.

Every relationship, whether queer or not, is unique in all ways, but it was becoming clear that coming out was even more a thing unto itself. I didn't want my experience to be mistaken for anyone else's. I was almost proud that I hadn't placed on the Kinsey scale.

When I had been dating men, whether casually or long-term, there had always been a sense of shared experience with my friends. There was advice to share or another perspective to give, and our answers to one another's questions were revelatory instead of prodding.

When I came out as queer, it was different. When discussing my lesbian relationships with my hetero-partnered friends, my limited experience was the source of authority.

I felt like the first girl in a teenage friend group to round third base — a funny thing for me, my high school's Drew Barrymore in Never Been Kissed.

I could describe the dynamics of my dates with women within themselves and how they had differed from anything I had experienced before. But when it came to the specifics of what had happened between the sheets, I found I hit my own boundary.

I really didn't want to go into it, at least not while I was still shifting through the experience for myself.

With other queers, I could articulate the experience, and I needed to, in order to locate the shifting lines of attraction I had begun navigating.

I had practically bolted to Anna's side for advice the first time a woman asked me out. After sex happened, I had to give her the blow-by-blow to work out my confusion.

The thing was, it really hadn't been about the sex itself, I told her after the first time. Years of dating men gave me little trepidation about jumping into bed if I wanted to, but with women, things felt more cautious.

Emotionally, we connected right away, but sexually, everybody had been pretty shy.

"You probably just need to meet a dom," Anna had said unhesitatingly. "I mean, my ex and I would just go at it for hours."

These are Anna's stories, and I wouldn't mistake them as anybody else's. They just play a role in mine. It was her openness that ultimately made me more forgiving of the curiosity of my friends.

If Anna could share her gay sex stories with me, a baby queer, then couldn't I tell my questioning friends? Couldn't I help them learn?

It wasn't that my friends in long-term relationships wanted to take my experiences for themselves. They weren't intentionally or knowingly probing for more information than I wanted to give. It was simply that they wanted to connect.

This was the very same motivation that had driven us to gossip about our boyfriends behind their backs. What they couldn't share directly, they wanted to share in with me, and even though I couldn't see it at first, the beauty of this intimacy became more apparent as time went on.

They weren't being voyeuristic. They were simply curious.

Even if my friends in hetero relationships wanted to examine my experiences to figure out their own orientations, when it came right down to it, I decided I didn't care.

Wasn't that the point of putting your life into a story in the first place? Isn't everybody always looking for a way to see themselves?

I certainly wasn't going to write about the dirty details on the internet, as the emotional obligation to not sexually exploit my lesbian encounters remained. But there wasn't any harm in sharing what went down -- or who, in this case -- with friends.

I had always believed that most of my friends were a little bit queer, and reaffirming my sexual orientation for myself only made this more apparent. And though I'm not dating anybody now, I found that my lesbian relationships actually added another dimension to my platonic ones.

And that, in addition to my queerness, gave me another layer of identity of which I could be very proud.