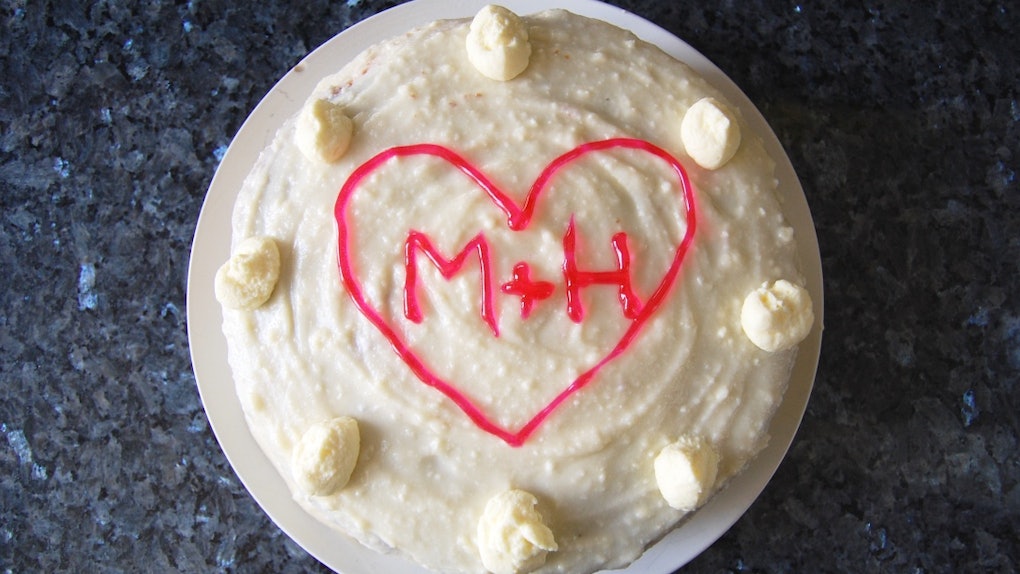 On May 19, Prince Harry is marrying Meghan Markle, and it's an occasion for the whole world to celebrate, obviously. Unfortunately, my wedding invite got lost in the mail, so I won't get to eat the actual lemon elderflower wedding cake Prince Harry and Meghan Markle are having, but when Washington Post reporter Becky Krystal published a recipe for a similar cake, I saw an opportunity to make my own tribute to the royal couple. I'm not a regular baker, but I have watched a lot of The Great British Bake Off, so I figured I was totally equipped to recreate a royal wedding cake. How hard could it be, right?

The first hint that maybe I wasn't ready for this challenge was in the name of the cake. Do you know what elderflower is? I did not. I still do not, but I do know you can get a bottle of elderflower cordial through Amazon Prime, so thanks for that, Bezos. The second hint that maybe I wasn't ready? The flour in my cabinet had an expiration date in 2016. Whoops! Still, between Amazon, a grocery store, and a liquor store (St-Germain, another elderflower-related thing), I had everything I needed. With my boyfriend tentatively watching from the couch (he asked if I wanted help; I told him it was a one-woman bake-off challenge), I got to work.

The one item I couldn't find was lemon curd, which is something totally foreign to me that was supposed to go into the filling. But Krystal mentioned in her recipe that "if you're up for it," you could just make your own. Of course I was up for it! I was baked on fumes of royal love!

Making my own lemon curd, while it only took lemon, butter, sugar, and eggs, was terrifying. I had no idea what it was supposed to look or taste like, and I was horrified of accidentally poisoning everybody by doing something weird to the eggs. Nevertheless, I persisted and stuck the thing in the fridge until I needed it, hoping it tasted how it was supposed to taste. If you're making this cake yourself, maybe spend an extra few minutes tracking down store-bought lemon curd.

After that horror, the first "official" step was to make and bake the cake dough, which was to be split into three tiers (so baked in three pans). I only own two pans, so that was just going to have to do. If you've made dough, this part is easy, with the addition of lemon zest and the elderflower stuff. Just follow the directions and don't make a mess with the mixer. (Thanks to Nailed It, I also know to not over-fill the baking pans, even if my self-cut parchment paper rounds weren't exactly round.)

I left the cake rounds in the oven too long because I was nervous about undercooking them. But life goes on. With them out of the oven and flipped over, it was time to soak that elderflower stuff into them. I didn't have a brush, as the recipe called for, but I figured a spoon was the same idea — just like I didn't have a wire rack, but figured a baking sheet would do. Improvisation is the salt of life (do not add extra salt to this recipe).

With the cake done, I had to make the filling and frosting, neither of which I've made before. To make the filling, Krystal explains, you basically have to whip heavy whipping cream till it's filling-like and then fold the lemon curd into it. That I could manage, although I did freak out as I took the lemon curd out of the fridge and frantically asked my boyfriend if he knew what lemon curd was and if it was supposed to take like lemons (apparently it is). Understanding I had gone fully mad, he gamely taste-tested the curd. Love is alive.

Next up was the frosting, and this is where my sanity and desperation to succeed really got tested. The recipe said to mix butter and confectioners' sugar, then add milk, lemon zest and juice, and St-Germain. I mixed butter and granulated sugar. After realizing my fatal mistake, I stood mixing and mixing, adding more milk to try and force the sugar into dissolving. The granulated sugar did not acquiesce to my desperate demands. Again, I brought my boyfriend in to taste and he shrugged, saying no one would notice the grainy frosting.

"This is going on the entire cake! Everyone will notice!" I shouted back, as if Harry and Markle themselves would be eating it. He swiftly backed out of the kitchen.

Eventually, I gave up and threw the granulated sugar mixture out, starting again with confectioners' sugar. Yeah, that worked a lot better — even if I couldn't figure out how to make the frosting not lumpy.

Finally, all the materials were done and just needed to be put in order. The first step was to make a circular "dam" with the frosting on the bottom cake round, which was yet another reminder that I can't draw a circle.

Next, I filled that circle with the filling. (Next time, I'd add even more filling.)

From there, I gently placed the second cake layer on top of it and got to work smothering the whole thing in frosting. I did a great and very clean job with that.

All that was left was decorating. I took a deep breath and cut a hole in a plastic bag to do some expert piping with the leftover filling, and then I got out my pink decorating gel. At last, my masterpiece was complete.

Finally, it was time to eat the mess, and honestly? It wasn't too bad! Yes, the cake was dry, yes, there could have been more filling, and yes, the frosting was lumpy. But it was a cake that tasted like lemon and elderflower, and as of this writing, nobody has puked because of some weirdo lemon curd blunder.

Given that after all this work I felt like my entire self-worth depended on the stupid cake, my boyfriend looked at me like a rabid animal as he took his first bite. He gave an exaggerated "mmmm!" to satisfy my royal-raddled ego, and I thought about the things we do for love. Making this ridiculous cake was a useless exercise in over-the-top displays, just as most weddings are useless exercises in over-the-top displays — and a royal wedding is especially that. Weddings are strange, outdated, and patriarchal constructions (much like the monarchy), but people do them anyways, as if to shout to the world, "I WANT TO SPEND THE REST OF MY LIFE PUTTING UP WITH THIS IDIOT'S STUPID ANTICS AND BIZARRE FAMILIAL TRADITIONS AND I WANT YOU ALL TO KNOW THAT!" which is a nice idea, really.

The cake was by no means fit for a princess, but it was fit for me, which is what finding the love of your life is all about, right?