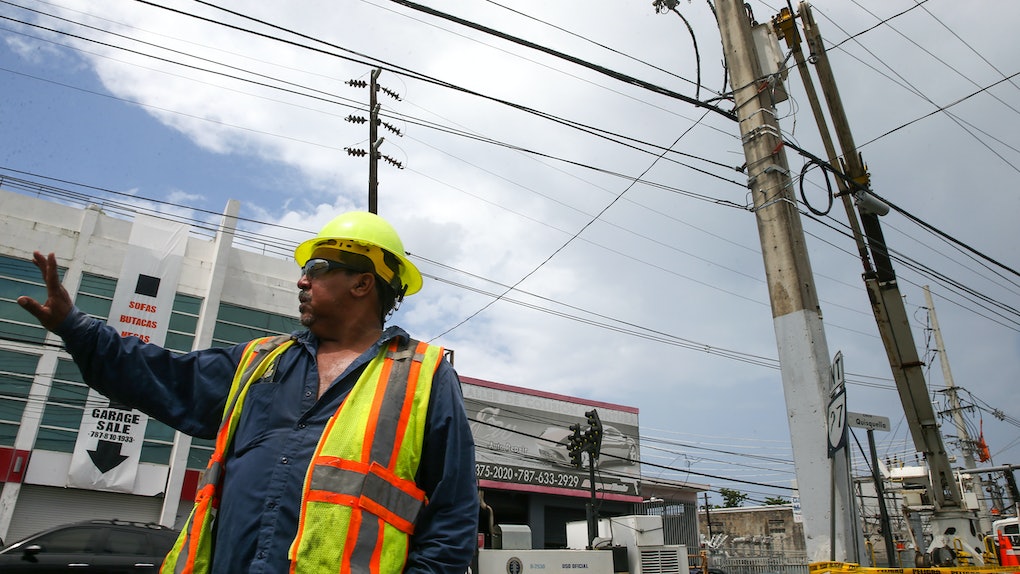 A new study published Tuesday shows that the Hurricane Maria death toll estimate could be much higher than the government initially reported — about 70 times higher, in fact. The findings, released on May 29, indicate that over 4,600 people may have died in the aftermath of the hurricane that hit Puerto Rico in September 2017. This runs counter to the official estimate of 64 deaths reported as of December. Elite Daily reached out to the White House and office of the Puerto Rican government for comment regarding the report's findings, but did not receive a response at time of publication.

The report, which was funded in part by the Harvard T.H. Chan School of Public Health, was published in the New England Journal of Medicine and based on a survey of nearly 3,300 households in Puerto Rico.

"This household-based survey suggests that the number of excess deaths related to Hurricane Maria in Puerto Rico is more than 70 times the official estimate," the report reads. "Accurate estimates of deaths, injuries, illness, and displacement in the aftermath of a disaster such as Hurricane Maria are critical to the immediate response, as well as for future risk reduction and preparedness planning. However, public health surveillance is extremely challenging when infrastructure and health systems are severely damaged."

The data showed the mortality rate was over 14 mortalities per 1,000 people, translating to a total of 4,645 deaths from Sept. 20 through the end of the year. This reflects a 62 percent increased mortality rate from a similar period in 2016.

Hurricane Maria wreaked havoc on the U.S. territory, causing an estimated $90 billion in damage, and the effects are still being felt. Lack of access to essential services — including electricity, running water, and medical care — has continued to plague the island for months afterwards, crippling the island's recovery.

In the months following Maria, Congress signed off on several rounds of disaster relief bills, adding to the aid distributed for victims of other hurricanes and wildfires. But despite billions of dollars in approved funding, the Puerto Rican government said this was only a start. It's nowhere near the $94.4 billion they estimated in November would be needed for the recovery process.

This isn't the first time we've seen an indication that the official count may be wildly off. The Harvard estimate is also a huge jump from December reports by outlets such as The New York Times and the Center for Investigative Journalism that found that the death toll might be as high as 1,000. In response to these reports at the time, Puerto Rican Governor Ricardo Rosselló ordered a recount of the estimates and said that his government wasn't intentionally under-reporting the figures.

"We always expected that the number of hurricane-related deaths would increase as we received more factual information — not hearsay," Rosselló told The Washington Post, "and this review will ensure we are correctly counting everybody." Per the Times, Rosselló commissioned George Washington University's Milken Institute School of Public Health to review the death toll estimates, an undertaking which has yet to come to fruition. The Times also notes that the Harvard report — which cost about a sixth of the Milken one — was done independently from the Puerto Rican government. Its researchers were reportedly denied data from officials.

On Twitter, users expressed outrage at the numbers and criticized the Trump administration's response to the disaster, adding to months of outcry at the lack of attention to the people of Puerto Rico. Many cited statistics about the hurricane's fatality rate compared with other national disasters that happened on the mainland U.S. For reference, the death toll for Hurricane Katrina in 2005 — the costliest hurricane in the last century — was 1,833.

Users also criticized President Donald Trump's response to the situation at the time, which included tweeting about the "poor leadership ability" by Carmen Yulín Cruz, the mayor of San Juan.

Maria was one of just a few major hurricanes that rocked the Gulf Coast and Caribbean last year, all within a matter of days. Tuesday's report by Harvard comes as an investigation by Politico found that some victims of Hurricane Harvey were denied federal assistance.