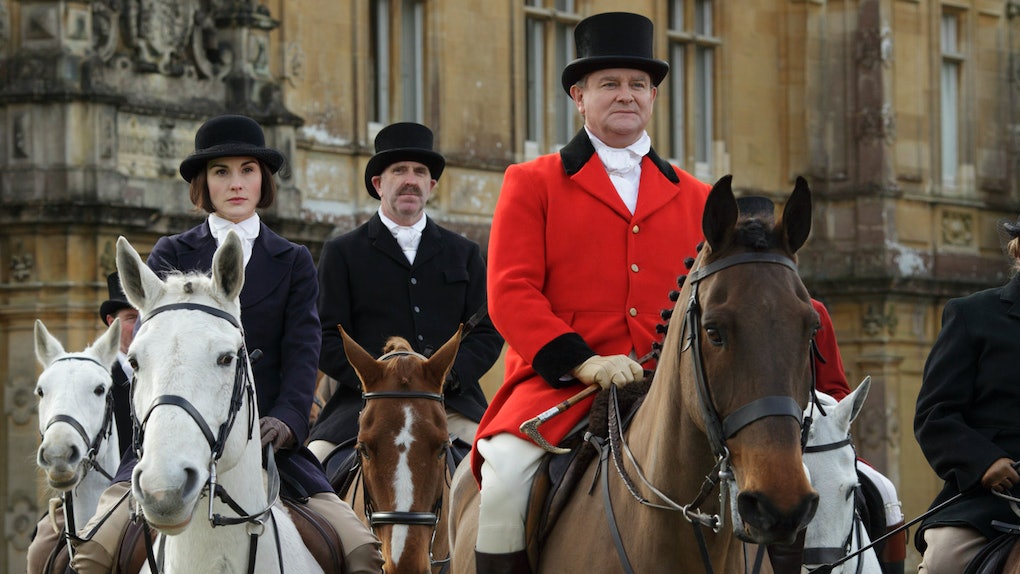 The Downton Abbey movie began filming this week at Highclere Castle, the real-life estate that stands in for the titular house of the series. Nearly all the cast is scheduled to return for the film, except for Lily James as Lady Rose. A few new faces are joining the cast, but on the whole, this is a reunion of sorts for those who played the Crawley family and their familiars. As patriarch Robert Crawley, the 7th Earl of Grantham, Hugh Bonneville’s quotes about returning to Downton Abbey are some of the sweetest things fans will read this week.

Speaking at the Heroes of Highclere event, the last significant occasion at the estate before it shut down for filming, Bonneville said:

I’m sure the Cararvons can’t wait for us to arrive, a hundred hairy grips and costumiers and actors all trampling all over the beloved lawns yet again. Thought you got rid of us! But we start filming on Monday [Sept. 10, 2018]. We did the read through last week, and I really must say it was like stepping back into a family, to see everyone again and our new guest artist Imedia Staunton and all the people who are joining up for such a lovely celebration and reunion.

As to what he was and wasn't looking forward to, there were a few things Bonneville wasn't so keen on, but mostly he was chuffed to be returning.

I’m not looking forward to the wing collars. But I am looking forward to being with that wonderful cast of people again, and the team and I’m so thrilled that a lot of the production team and a lot of the crew, our makeup artist who was the makeup artist on the first two series is coming back to join us. And our director, Michael Angler, who directed several episodes of Series 5 and 6 is going to direct and it’s just nice to be back with the family once again.

Bonneville also revealed how he got involved in Downton in the first place.

I got involved because I was doing a film with Julian Fellowes the year before called From Time to Time, which starred most of the cast of Downton actually. Dame Maggie was in it and Allen Leech who ended up playing Branson, and David Robb and various other people, Harriet Walters. And one day during pickups I said... Julian was directing it as well as having written it, adapted it… and I said, “What are you doing next?” And he said he had four or five projects coming up and all that and one of them he started describing the outline of this story, and I said: “That sounds very interesting. When it’s ready can I have a look at it?”

Bonneville admitted he didn't think Maggie Smith would agree to the series at first.

I said: “Out of interest, who are you approaching for the mum?” And he said: “Dame Maggie.” And I said, “Well that’s not going to happen, but good luck.”

Thankfully Maggie Smith did say yes, and Bonneville confirmed she was even returning for the film. Fans can't wait.

The Downton Abbey movie is expected to arrive sometime in 2019.

More like this
Is Netflix Making A 'To All The Boys' Spinoff Series About Kitty? Here's The Tea
By Rachel Varina
Here's How To Stream 'Nomadland' So You Can Finally Get The Hype
By Rachel Varina
The 'Zola' Movie Trailer Will Have You Reliving The Iconic Twitter Story
By Dylan Kickham
Stay up to date