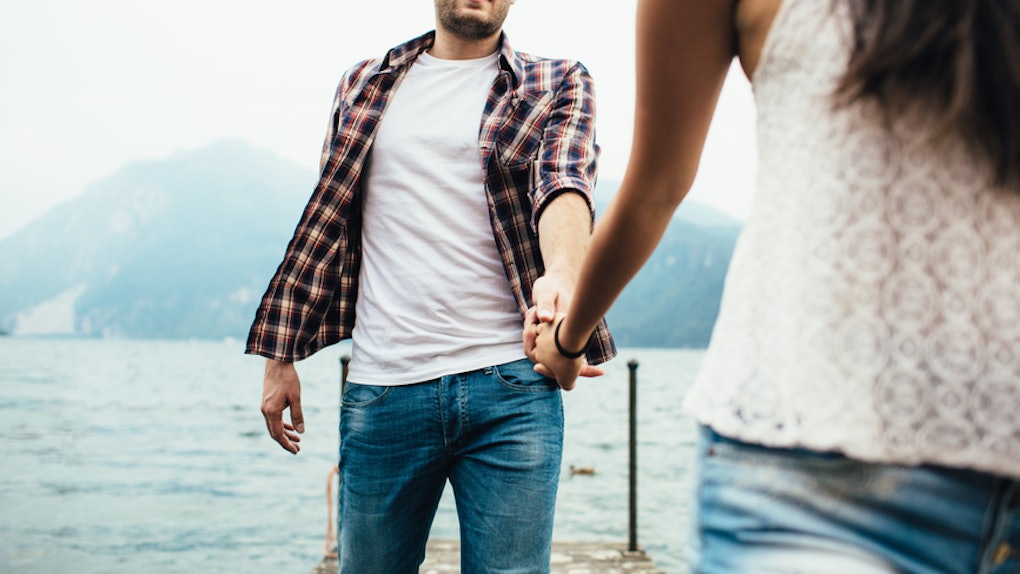 My horrible ex was a master of the hot and cold technique. One day, they would be all lovey-dovey, and the next, they would disappear off the face of the planet, like clockwork. And just about the time I had moved on, they were back in my life and turning up the charm. While part of me always knew that they weren't that into me, it was still hard to admit. Learning how to know you're in love with someone who doesn't take you seriously was difficult, but it completely changed my dating life. It was time to make room in my life for real love, which — spoiler alert — I did, but it wasn’t until I finally gave that person in my life the boot and decided I wouldn't give my heart to anyone else who didn't reciprocate.

While every relationship is a little bit different, there are a handful of behaviors that essentially serve as huge, neon, flashing signs that you've found yourself stuck with someone who is just going to waste your time and hurt your heart. So I reached out to experts to find out what those signs are, so you can avoid being trapped in that same bullsh*t pattern.

1. You're Putting In All The Effort

When you are both equally invested in the relationship, the amount of emotional labor put into making it work should be about equal as well. "If you start noticing you're putting more effort into the relationship and staying connected [more] than he is, then he may not be that into you," says Dr. Wyatt Fisher, licensed psychologist and marriage counselor. Do you feel like you're always working hard to connect, but they aren't reciprocating? Or maybe they are happy to be physically intimate, but won't get close on any other level. If you've communicated your concerns to them, and there's still no improvement, find someone else who can't wait to open up and is willing to help you open up, too.

2. They Don’t Make Time To Spend With You

Do you feel like a priority to them? Are they finding excuses to avoid one-on-one time with you? Do you feel like pinning them down is really difficult, and even when you have plans, they may flake on them at a moment’s notice? Yeah, that's a strong sign that they are not serious about you. According to James Preece, dating guru and relationship expert, "No matter how busy someone is, [they'll] make time for you if [they] really want to see you. Don't accept excuses that [they have] to work late or something urgent has come up. Yes, life can get in the way, but serious people work around the obstacles."

3. They Haven't Introduced You To Their Friends

One of the ways we vet potential partners is to have our closest friends take a look at them. Has the person you've dated introduced you to their inner circle or at least mentioned wanting to? If not, that’s a sign you are being compartmentalized, which doesn’t bode well for your future together. "If you've been dating for a while and you don't know anything about [their] friend group, there's a good chance that [they're] not taking the relationship seriously," says Eric Resnick, lead dating coach at ProfileHelper.com. "If [they were, they'd] want you to meet the other people who are important to them."

When you are in a mutually emotionally committed relationship, it's natural and normal to share the things that are happening in your life and what is on your mind. But if you feel like that level of communication is a one-way street going only from you to them, then something is definitely off in the balance of your relationship. For instance, Resnick says, "when [they've] clearly been brooding about something for a couple of days, but [are] unwilling to share what's wrong with you," it’s a sign that there are some fundamental problems in the relationship because they, "should be willing to open up to someone [they] trust and care about."

5. They Never Talk To You About The Future

Do you get the feeling that they don’t see a future with you because they literally never bother to bring it up? Well, trust your gut. "If you've been together for a while and [they aren't] willing to talk about what [they] see in the future for the two of you, it is a good sign that [they haven't] really been thinking about having a future with you,” warns Resnick.

OK, so there are definitely some harsh truths here, and these pills can be hard to swallow, especially if you really love someone. But it’s better to hurt a little now than a lot over a prolonged period of time. You deserve more than being strung along by someone who doesn't recognize how lucky they are to have you. Don't settle for anything less than someone who is just as serious about you as you are about them.