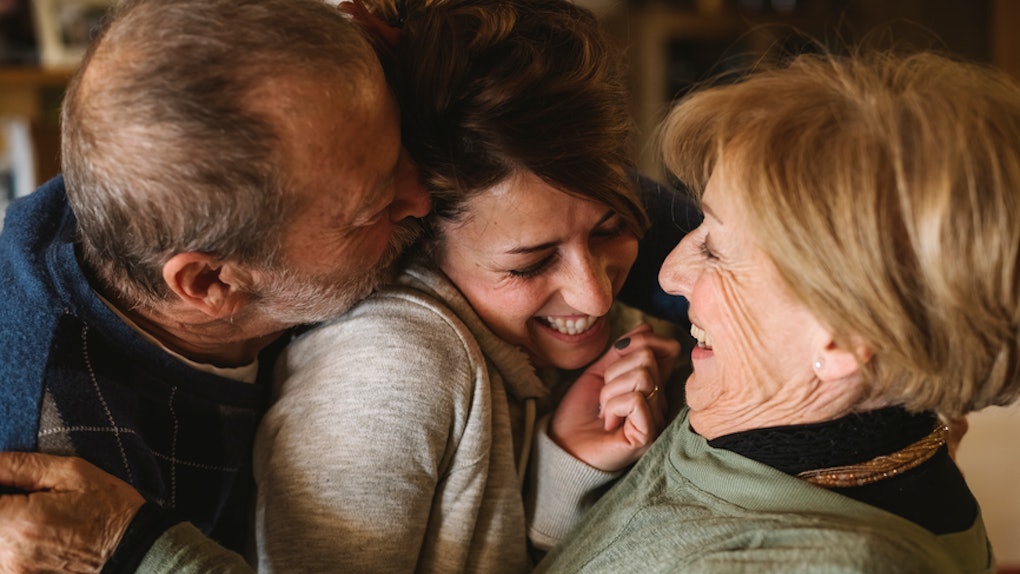 How The First Weekend With Your Partner's Family Might Go, According To 10 Real Women

Meeting your partner's parents is always a nerve-wracking experience. You never really know what to say, or wear, or how to react if their mom starts sharpening knives in front of you (speaking from personal experience here) . But the first weekend with your partner's family — like, the first time you spend a full 48 hours together, non-stop — is exceptionally terrifying.

I've never spent a full weekend with my boyfriend's family (fun fact: I once dated a guy for two years without ever meeting his mom! Not a red flag at all!), but I have had a few boyfriends tag along on family trips, and the results have been mixed. They've either completely clicked and bonded with my family, watching football with my dad and everything. Or they've spent the entire time glued to my side and awkwardly mumbling, like a shy pre-schooler at his friend's birthday party.

Now, as I said, I have no idea what it's like to be in that position, but I'd imagined it was similar to going through sorority recruitment: You plaster a smile on, learn how to dodge and ask all of the right questions, and never let 'em see you sweat.

But it turns out it's more like a romantic comedy (and sometimes a horror film?) than rush. And if you're getting ready to meet your SO's family for the first time, I want you — like a Girl Scout — to be prepared. So, here are 10 women's stories from the first time they stayed with a partner for the weekend. Good, bad, and Gremlins-level ugly.

I hate when people talk about my birthing hips in front of me, too.

When I met my then-boyfriend's mother, she didn't address me directly, or speak English in front of me. She told her son (my boyfriend) in Spanish that I had good birthing hips, and asked if I was pregnant yet... If only her son had told her that I spoke enough Spanish to understand her. Wow.

Note to self: horseback riding is the key to bonding with the 'rents.

I drove down to stay at my boyfriend's family one weekend, but he actually had to work all day when I first arrived. I'd literally just met his mom and she said, 'Um, Dan* won't be home for six hours, do you want to go ride horses?' And I was like, 'Uh, okay!' And so we went horseback riding for five hours and became BFFs.

When I went to stay at my ex's for the first time, his dad made me a couple of Negronis and it was wild. We chatted about Star Wars and how Negronis are actually kind of gross... I think he liked me more than he liked his son. That fam was crazy hedonistic, so it was just like abbondanza to the max. So much meat and cheese and booze all weekend.

Don't let your girlfriend's family out after midnight, I guess?

The first time I went home with my ex-girlfriend, it was like the movie Gremlins... Everything was great during the day, and they were so nice and welcoming, but the later it got, the crazier they became. Her mom and sister got drunk on chardonnay and kept asking me very personal questions, and her little brother — who'd been totally cute and calm earlier — started running around naked. And then the next morning, everyone was back to being sweet and normal. It was so weird.

Anyone else have the song 'That's Not My Name' stuck in their head now?

His mother kept calling me by his ex's name. Repeatedly. No matter how many times I said, 'No, actually, I'm Fifi...' The last time I corrected her she just said, 'Oh well, no point learning your name, you won't be around long enough!' She was right.

All right, my heart is warmed.

My college boyfriend lived in Indiana and I went to visit him the summer between freshman and sophomore year... When I met his dad for the first time, he said he never ever saw his son smile like he did when he talked about or to me. It was v cute and nice to hear. Apparently his mom still asks how I am.

I wish this one had a happier ending.

My college boyfriend invited me halfway across the country to meet his mom and his mom's partner. I remember being a little nervous. He prepped me to dress a certain way (no dresses, my favorite) to blend in. But the trip itself actually turned out really nicely! We spent a couple days in his hometown. During the day, he'd show me around his favorite places and introduce me to hometown friends, and at night, we'd get dinner with his mom and her partner. They were so sweet and made such an effort to get to know me. The only weird thing about the trip is that my boyfriend broke things off two weeks after we got home... the timing really threw me for a loop.

My (first-ever) boyfriend's mom was kind of a hippie, and didn't seem to like me very much. The first time I went to stay with him, we all sat down to dinner, and had lamb heart stew.... But his mom ladled individual lamb hearts out to each of us. I ate it all politely, but I think I was visibly freaked out (and everything tasted like iron).

Nothing says, 'Welcome to the family!' like fake teeth.

Not about staying with his parents, but, my dad's side of the family bought crazy fake teeth and wore them the first time I took my fiancé to visit them in Georgia. They also put fake dog poop on the ground, which he tripped over. I'd warned him that they were a bunch of comedians, though, so he loved it. And I was crying laughing the whole time.

This is actually my worst nightmare.

First time I stayed with my boyfriend's family, I was in their bathroom and the door was broken, so it started to pop open a little. His brother walked by and screamed, "Yo, your girl is peeing with the door open!" I was mortified.

Deep breaths, deep breaths. I'm sure your partner's family will love you! Just, be ready to eat a few lamb hearts and ride some horses, and you'll be golden.