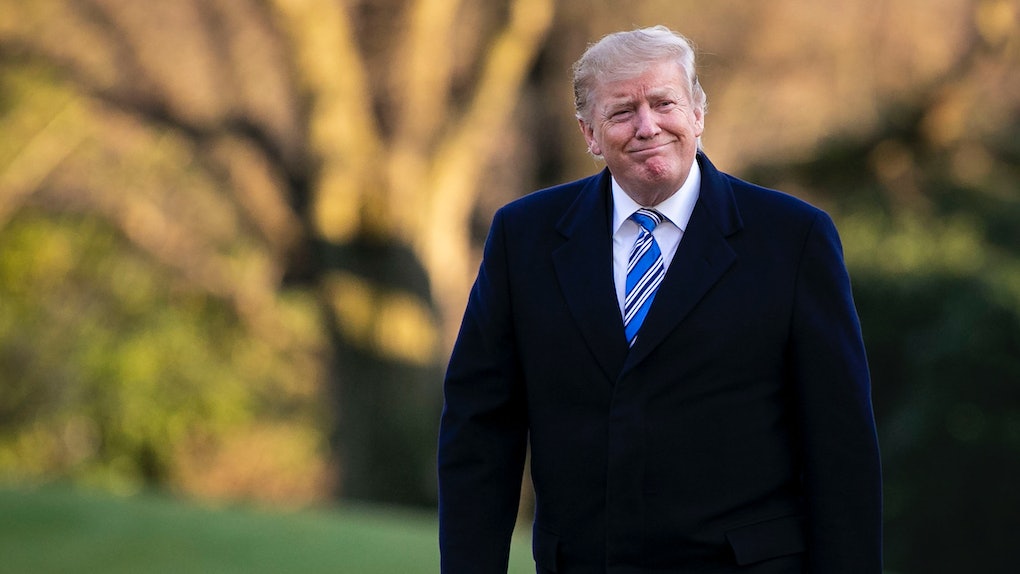 How Much Does Trump Make From Mar-A-Lago? Way Less Than He Used To, According To Reports

Since his inauguration, President Donald Trump has stirred controversy for a few reasons, but as of recently, his financial matters have made headlines. Even though the president isn't running the Trump Organization any longer, he's still benefiting from it. So, this begs the question: How much does Trump make from Mar-A-Lago? According to reports, it's taken a hit.

On Thursday, May 16, NPR reported that according to Trump's 2018 financial disclosures, the Trump Organization's Palm Beach, Florida, resort Mar-A-Lago fell nearly 10% in income last year to $22.7 million. Elite Daily reached out to the Trump Organization for confirmation and comment on the reports but did not hear back in time for publication. Trump has been known to frequent the resort for impromptu golfing trips and to spend winter holidays with first lady Melania Trump, but it looks those holidays aren't upping the club's income.

It's kind of ironic that the club apparently isn't raking it in, given the attention it's gotten for its prices. In January 2017, CNBC reported that the Trump Organization raised Mar-A-Lago's membership initiation fee to $200,000, which reportedly took effect on Jan. 1, 2017. The initiation fee had been $100,000 since 2012, but following Trump clinching the 2016 presidency, the chance of catching a glimpse of the president might have led the Trump Organization to increase prices. In addition to the initiation fee, members are also reportedly required to pay an annual $14,000 in dues. Also, for the trips that Trump makes down there, the club earns money for the staff and security costs that are associated with a presidential visit — in just a few months in 2017, the Secret Service paid Mar-A-Lago over $63,000 in hotel costs, according to CNN.

Trump purchased the Mar-A-Lago property in 1985 for an estimated $10 million, according to Forbes. The 20-acre resort is full of amenities, including a main mansion with 100 rooms, pool and golf clubs, tennis courts, a restaurant, and an elaborate ballroom for special events. At first glance, it is quite an extravagant property, but is it worth $200,000 to use? That's for the members to decide.

Even if Mar-A-Lago's income has taken a hit, the Trump Organization's other properties are reportedly doing well. NPR reported that the Trump's South Florida Doral Resort's income increased nearly 2%, going from $1.2 million to $76 million.

The foreign and domestic emoluments clauses of the Constitution state that a president may not accept profit from a foreign state or official while they are in office. However, foreign politicians including the members of the Kingdom of Saudi Arabia, the Prime Minister of Malaysia, and Kuwaiti officials all reportedly visited and even stayed at the Trump International Hotel in Washington, D.C. in 2017, months after Trump's inauguration. Eric Trump addressed the controversy in February, claiming that the Trump hotels do not profit off foreign government business. "Unlike any other luxury hospitality company, we do not market to or solicit foreign government business," he told the Associated Press. "In fact, we go to great lengths to discourage foreign government patronage at our properties." The company also donated $200,000 that it said were profits from foreign business to the U.S. Treasury, per the publication.

Trump's Mar-A-Lago property may reportedly not be doing as great as previous years, but there's no telling what the 2019 reports will reveal. In the meantime, Trump may want to start thinking about his summer vacation plans.