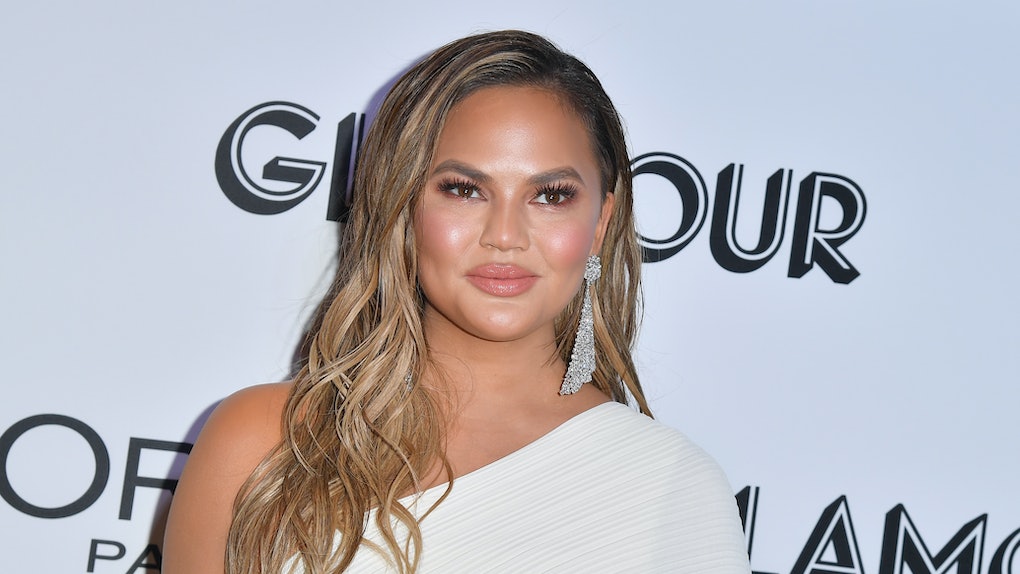 How Many Tattoos Does Chrissy Teigen Have? They’re All Inspired By Family

Chrissy Teigen is an open book. Whether she's talking about her love life with husband John Legend, defending her personal choices when it comes to parenting their children, Miles and Luna, or just sharing the ins and outs of her cookbook endeavors, Teigen is the ultimate entertainer, especially on social media. She's no different when it comes to showing off all of the epic tattoos she's gotten over the years. But, because Teigen's ink has come at different times in her life, fans can't help but wonder: How many tattoos does Chrissy Teigen have? While it's not many, she appears to have a handful of tattoos, all with one common theme: family.

After suffering the heartbreaking loss of her unborn baby, Jack, in September 2020, Teigen got more vulnerable than ever on social media. She shared her pregnancy loss story on Instagram in hopes of helping other people going through the same thing. She even documented the moment she and Legend met their son who died at 20 weeks. Nearly a month later, Teigen showed off a tattoo she had gotten in memory of Jack, so that she could carry him with her no matter what.

The image was so powerful and had fans wondering if Teigen had any other tattoos.

On Oct. 31, Teigen tweeted a photo of herself holding Legend's hand. With her palm facing upward, a tattoo with Jack's name could be seen written across her wrist in cursive.

In October 2019, Teigen documented an ink session with Los Angeles-based tattoo artist Winterstone. "Cool mom back at it again," she captioned a series of photos that ended with her debuting a variety of roman numerals on her forearm.

The meaning? The string of dates includes the birthdays of Teigen's family members including her dad, Ron Teigen Sr., her mom, Vilailuck Teigen, Legend, and their kids, Luna and Miles.

The Names of Her Husband & Kids

In April 2019, Legend and Teigen got near-matching tattoos, with the Cravings author's on her forearm, and the singer's on his bicep. Hers reads "John, Luna, Miles" in cursive, while his looks the same but says "Chrissy, Luna, Miles."

Teigen shared the image of their tattoos on Instagram, writing: "Hey guys please don’t talk to us unless u have tattoos we are a cool tattoo family now and we only want to talk to other tattoo families (srry if this seems harsh)Thank you thank you @winterstone. You are not only incredibly talented but you are very kind and delightful and welcome over any time!!"