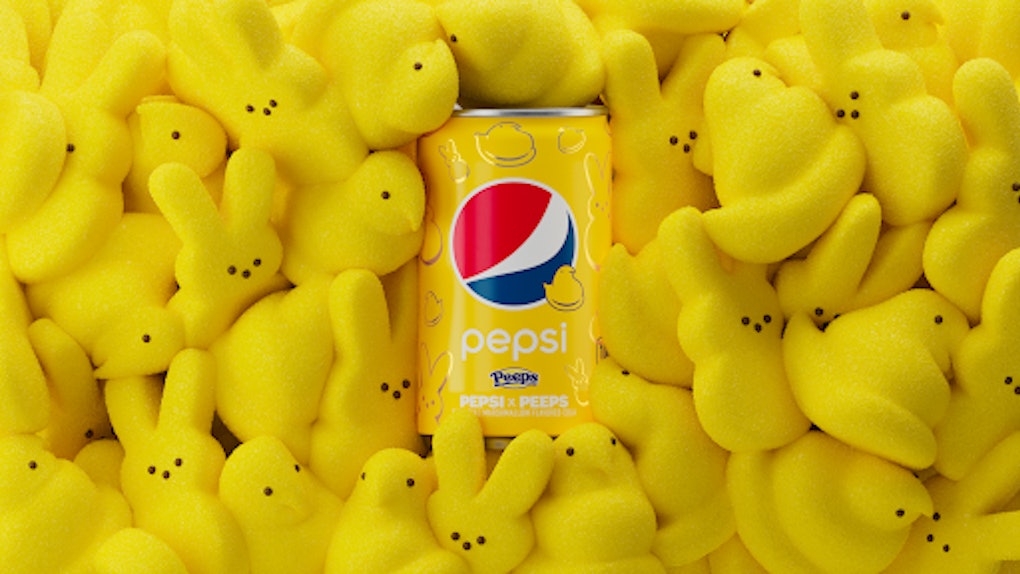 How Long Is The Peeps-Flavored Pepsi Sweepstakes? Try Your Luck Soon

Get ready for an unexpected mash-up that'll have you totally nostalgic for some classic Easter treats. Pepsi and Peeps dropped a new sip that's a combo of cola and marshmallow flavors, but there's a twist — you can't buy it in stores. You'll only be able to win it through the Hanging With My Peeps Sweepstakes. If you're looking to score a can of the sweet soda, you may be wondering: How long is the Peeps-flavored Pepsi sweepstakes? You'll certainly want to act fast before it ends.

Pepsi and Peeps unveiled the #HangingWithMyPEEPS sweepstakes on March 25, sharing details on how you can enter to win the exclusive marshmallow-flavored cola this spring. According to the release, it has the "refreshing taste of Pepsi cola" and sweet Peeps Marshmallow flavor." Since the new product won't be sold in stores. you'll have to try your luck if you'd like to snag a three-pack of 7.5-ounce mini Peeps-flavored Pepsi cans, which come in festive blue, pink, and yellow colors.

Entering the contest only requires a few simple steps, but you'll want to enter ASAP because the sweepstakes only runs through 11:59 p.m. ET on Wednesday, March 31. All you'll need to do is post a photo of yourself enjoying spring with some Peeps Marshmallow Chicks or Bunnies on Instagram or Twitter. In your post, make sure to tag @Pepsi's Instagram account or the brand's Twitter account and include the hashtags #HangingWithMyPEEPS and #PepsiSweepstakes.

You can also send a mail-in entry by including your name, mailing address, phone number, and email in an envelope addressed to Pepsi Peeps Sweepstakes, c/o GSE, PO Box 130, Dept. 21-8117, Glencoe, MN 55336-0130. It's important to note that the envelope will need to be postmarked by the contest deadline on Wednesday, March 31 and received by Tuesday, April 6. You can submit up to two entries via Twitter, Instagram, or mail-in during the sweepstakes, but you can only use each method once.

The brand will randomly select the 10 grand prize winners on or around Wednesday, April 7 to receive an exclusive edition of the three-can pack of Peeps-flavored Pepsi for an approximate retail value of $10. Even if you don't score the grand prize, you could be one of the 3,160 first prize winners who will get a three-pack of Peeps-flavored Pepsi, along with one five-pack of Peeps, for an approximate retail value of $2.50.

For more details on the Peeps-flavored Pepsi contest, you can head to the official rules page. Remember, since the sweepstakes officially ends on March 31, you'll want to try your luck soon to snag some springtime sips.