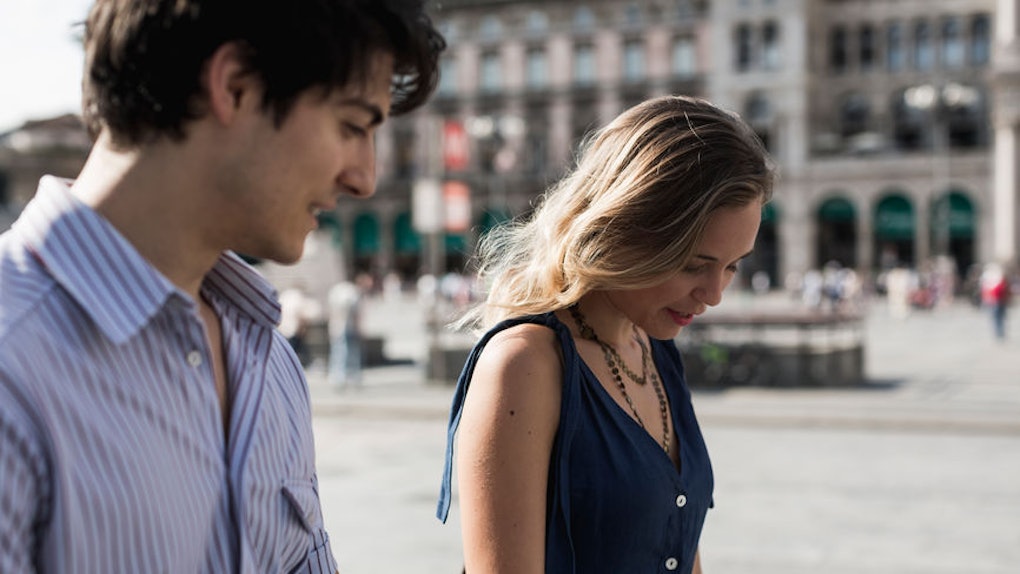 How Do You Know A Guy Likes You? 10 Women Share Times They Were Totally Wrong

People say women are a mystery, but riddle me this: How do you know when a guy likes you? Figuring it out can be virtually impossible at times. Don't believe me? Let me paint you a little picture.

You know this dude who you are absolutely convinced has feelings for you. Why are you convinced he has feelings for you? Um, maybe because he's giving you literally all of the signs. He makes eye contact that lingers almost a little too long. He's down to hang out with you even if it's to do something boring and lame, like picking up deodorant from CVS. He texts you back instantly. As far as you're concerned, he's is pretty much the safest bet possible.

Then you put yourself out there. Maybe it's to warn him that you don't feel the same way. Maybe it's to tell him that you do also have feelings for him and want to take your relationship to the next level. Maybe it's just to go in for a kiss. Whatever you do, you're going all in on the bet that he has feelings for you... and then he tells you that he doesn't, in fact, have feelings for you. Suddenly, you're left not only feeling rejected, but also second-guessing all of your own basic human instincts. How could you have possibly gotten this so wrong? Well, luckily, you're not alone. Plenty of women before you have been where you are now and, luckily, a few of them were brave enough to share their stories on Reddit. We have the best of the best here.

He ghosted her out of nowhere.

A guy asked me to visit him, sent me pictures, asked me for pictures, and talked to me every day for a little over a week about how much he liked me...then he just disappeared. Won't answer messages, doesn't talk to me, and the few times I've hung out with him since he seemed completely uninterested. I'm not great with people, and have a lot of trouble even making friends, so it's kinda f***ed up my sense of self worth/confidence to know how easily someone can just drop me like that.

He was just using her to make his ex jealous.

In highschool. This guy and I would text frequently, we were very touchy, he said I was great to talk to and he found me funny. I layed down on a bench while everyone talked and played basketball and he took his jacket off, came up to me, and placed it on me like a blanket.It turns out he was just using me to try and make his ex girlfriend jealous. And also told everyone that I sent him nudes on snapchat when the only photos I sent him were of my eye with text over it. All while doing the same to another girl and attempting to pit us against each other.It was dissapointing because he really seemed like a great person. He was sensitive (seemingly), took such great care of his little sister, was always the first person to offer a hug when someone was upset. Honestly, every girl had liked him at some point or another. I still don't understand it, never had I ever been so off about someone's character.He's in a relationship with someone now, though, and it seems like it's going really well. I don't hold anything against him.

I made friends with this guy at university. He was really nice to me, wanted to hang out alone and you know when you lock eyes with someone and you can just feel chemistry? Yeah...turns out he’s gay 😂. In my defence, everyone around me thought he was straight too. We’re still good friends and joke that if things were different, we would 100% be a couple.

She was a placeholder.

A recent fwb of mine... it was just the feeling I got when he would look at me, we spent a lot of time together, sometimes just cuddling and talking, lots of kissing and looking into each other’s eyes, he would tell me all the time that I’m such an amazing girl etc, and I began to think okay maybe there’s something there and I need to figure out if I want this, I ended it with all other sexual partners because I really wanted to figure this out and then he ended it with me because he apparently finally got the attention of this girl he really liked all along and so we haven’t spoken in a long while.So now I’m in this position of being completely single again and tbh it fucking sucks. But as a kind of positive I applied for a job in a different city to begin at the end of the year and I got it, so I might be leaving this place in like six months anyway and so a relationship wouldn’t have worked out, but yeah, still sucks...

He told her he loved her right before dating someone else.

Ex fwb told me he loved me and that he thinks we’re soulmates. He got into a relationship shortly after so I guess that was a good nope.

He rejected her not once... BUT TWICE.

This is so cringe, ugh.Was weirdly close with a male friend. Read it as him being into me and he said nah. Dropped it for like a year, whatever, still close friends, wasn't a thing. Eventually caught feelings for him myself, still read it that way (WHY PAST ME, WHY) and my roommate seemed to agree....N O P E.

He cancelled their plans and never spoke to her again.

Met a guy through work, he seemed like a genuinely nice person. Talked for 2 months every day went on 5ish dates and slept together all while he was telling me how he thought I was great. Well out of nowhere he cancels plans and ditches me. I mention something politely about it and then never hear from him again. I am not sure what happened maybe he found someone new or just lost interest but since there was no closure it's taking forever to get over and is a huge blow to my self esteem.

He had a girlfriend.

This will probably get buried but I had to share because I still cringe every time I think about it.So I lived in a co-ed floor in college. My junior year I had a HUGE crush on my RA. He and I became friends. He used to listen to me play guitar, he let me cry on his shoulder when I was sad. He made fresh hot cocoa from scratch for me and my roommate. I was utterly convinced he liked me but was just too shy to say anything. But I was much too chicken to ask him out until about a week before the end of the semester so I asked him if he'd like to go out sometime....and that was when he told me he had a girlfriend that he'd been seeing for months and for some reason never mentioned her before. I died inside a little.

He suddenly freaked out and mentioned his girlfriend.

Happened very recently. I got in touch with an old friend who I was very flirty with. Probably past the point of flirty as we were pretty blatantly interested in each other. Anyways we start talking again and he hits on me a little. Like asked to see a picture of my cute face and complimented my body. Both things pretty much out of nowhere - not like things someone with a flirty personality would say because they fit the flow of the conversation (I’m not very good at flirting, so I can’t say that I was putting out vibes even if I was thinking them). We agree to hang out, and I’m thinking that we’re gonna hook up. Then all of a sudden he ends the conversation by saying that he had to go because his girlfriend was calling. We ended up hanging out the next week, and he kept a lot of physical distance. An awkward side hug greeting and sitting on complete opposite ends of the couch. At one point I scooted over to him to show him something on my phone, he looked at it, then stood up and moved farther away.

He got up at the peak of their date and left.

I went out to eat at a restaurant with my friends one day and the waiter we got was a pretty handsome guy, I didn’t flirt with him or really do anything special but he ends up asking me for my number, right in front of my friends and I gladly gave it to him. We text for a while and decided to go on a date, we go out to eat we sit down for what feel about 40 minutes? And after our meal he goes okay my friends are picking me up bye, and just leaves. I thought the date was going well and he just got up and left. Not gonna lie it kinda hurt.

Being rejected by someone who you were convinced had feelings for you is always going to suck, but at least now you know that you're not alone!