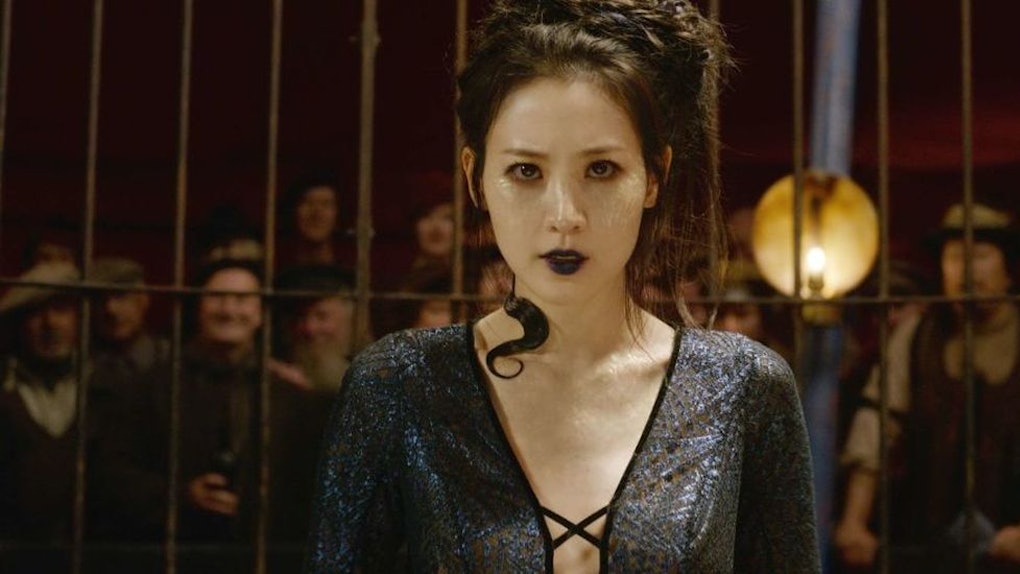 How Did Nagini End Up With Voldemort? 'Fantastic Beasts 2' Introduced The Human Character

For fans of the original Harry Potter franchise, learning the truth about Nagini's origins was a bit of a two-way street. It was good to know the sense had by all the snake Voldemort prized as a pet was more than she seemed. But at the same time, her story seemed a tragedy, a Maledictus forced to work as a circus performer who would one day never be able to transition back. But there are so many other questions, such as how did Nagini end up with Voldemort? Warning: Spoilers for Fantastic Beasts: The Crimes Of Grindelwald follow.

Much like Leta Lestrange, once Potterheads knew the character played by Claudia Kim was Nagini, there was a going assumption about which side she would be on. After all, Nagini was a beloved pet and servant to Voldemort, doing his bidding and having his trust in a way Bellatrix envied. Nagini was the ultimate Death Eater, even if she never took human form, loyal to the end.

Since Nagini was such a Voldemort loyalist, it would stand to reason she would follow Grindelwald too. Most fans see Grindelwald's crusade as the forerunner to Voldemort's plans for Muggle domination. If Nagini were for one, she would be for both.

But it turns out back in the day, Nagini was not so enthused by wizards and witches who were into global domination of all things non-pureblood magic. In fact, when Credence drags her into see Grindelwald speak at the end of the film, she's distraught at being in a room full of his followers. They despise and fear those like her, seeing her ability to change back and forth as making her subhuman, or at least sub-witch. To them, she's no better than a house elf, and not even close to as useful.

When Grindelwald reaches out for Credence to join him, come with him, find answers to who he is, Nagini is desperate for him not to go. Like Jacob losing Queenie, this is a place she cannot follow. This is a cause which will put her on the list of those who are to be purged. But until Tina and Jacob, who have each other and their friends to lean on in such a tough moment, when Credence leaves her, Nagini is all alone in her grief.

Of course, the real question for everyone is what happens next. Newt, as everyone knows, is a lover of all magical creatures, and would probably be more than a little excited to befriend Nagini, if she'd let him. But with the knowledge she will eventually turn to the Dark Lord after she turns for good, it's hard to imagine Newt will be a force in her life between then and now.

But then again, perhaps the real reason she turns to Voldemort is, unlike Newt, once she becomes a snake for good, Voldemort can still talk to her. Newt may love animals, but Parseltongue is not his forte.

Fans will learn more when Fantastic Beasts 3 comes out in 2020.