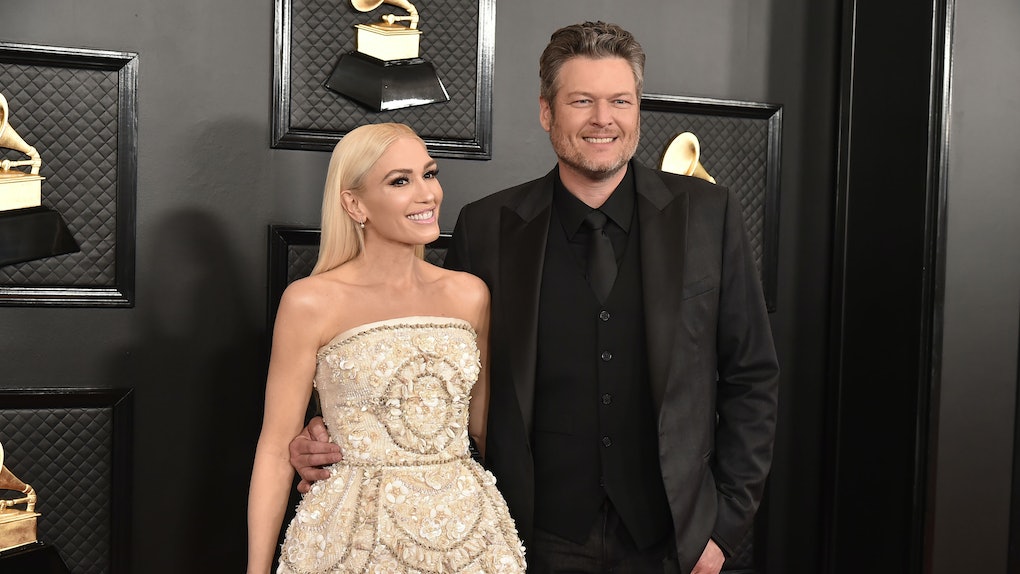 How Did Blake Shelton Propose To Gwen Stefani? The Reported Details Are So Sweet

Still not over your two favorite coaches from The Voice getting engaged? Don't freak out, but I come bearing details on Blake Shelton's proposal to Gwen Stefani. Like, for starters, how he reportedly did it. According to a source who reportedly spoke to Us Weekly on Oct. 27, "Blake had the ring custom-designed, and asked permission from her dad before asking Gwen. It meant so much to Gwen that Blake was so traditional about it.” (Elite Daily reached out to reps for both Stefani and Shelton for comment on the claims, but did not hear back in time for publication.)

While the lovebirds haven't yet shown a close-up photo of the ring, eagle-eyed experts have a few key takeaways about her rock. “Gwen’s massive new bling appears to be a round or oval cut, set in a solitaire or simple pavé platinum setting. While round cuts are most popular (and most expensive due to high-demand), we’ve watched fancy shapes such as oval become more and more sought after, especially with style icons Blake Lively and Hailey Bieber rocking ovals on their ring fingers,” Katie Zimmerman, chief merchandising officer of Blue Nile, tells Elite Daily. “With the center stone nearly reaching Gwen’s middle knuckle, I estimate the total weight of her engagement ring to be approximately eight to 10 carats at a value of $700k-$800k, depending on the color and clarity of the diamonds.”

Meanwhile, Kathryn Money, SVP of Merchandising and Retail Expansion at Brilliant Earth, estimates the ring's stone is six to nine carats and costs upwards of $500,000. Either way — wow.

ICYMI: Both Stefani and Shelton announced the joyous news on Instagram on Oct. 27. Alongside a picture of them joyfully kissing as she flashes her ring to the camera, Stefani wrote:

Shelton posted the same picture to his feed alongside this mega sweet caption:

According to another source who reportedly spoke to Us Weekly on Oct. 27, the announcements apparently came a few days after Shelton originally popped the question to Stefani in Oklahoma.

As you can imagine, the country star is very excited to finally be tying the knot with his girlfriend of five years. When Pastor Rick Warren congratulated them on Twitter, Shelton responded, "thank you sir. We are extremely excited!"

So, so, so happy for these two!

More like this
When Are Ariana Grande & Dalton Gomez Getting Married? Here's The Reported Tea
By Corinne Sullivan
18 Celebrity Couples Who Got Married In Secret
By Corinne Sullivan
Clare Crawley's Tweet About Matt James Reportedly Dating Grace Amerling Is Shady
By Candice Jalili
Stay up to date