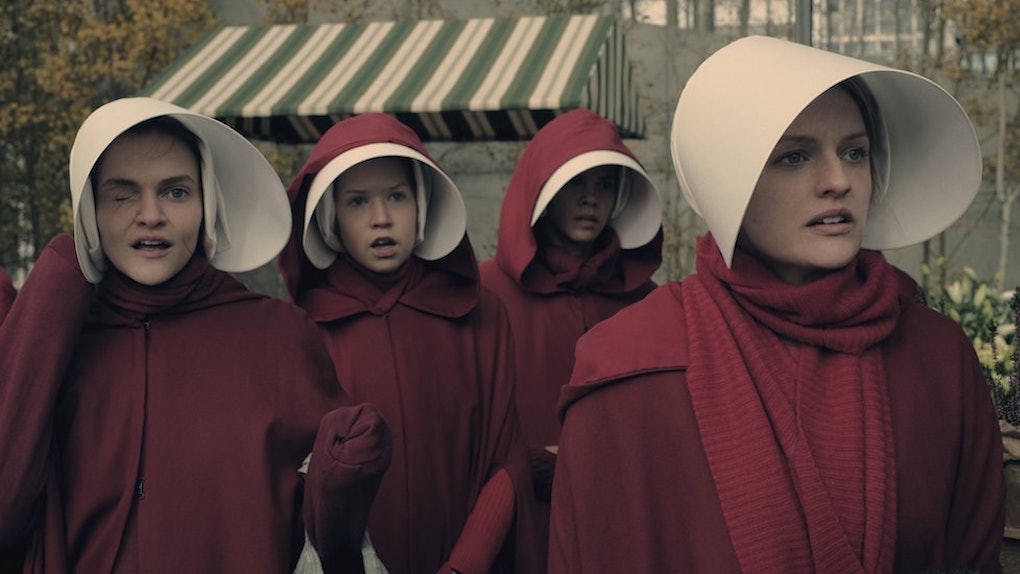 How Did America Become Gilead In 'The Handmaid's Tale'? Season 2 Will Spell It Out

We are still a month away from the second season of last year's dystopian breakout The Handmaid's Tale, and now the cast and creators are dropping some seriously exciting details about what we can expect from Season 2. Over the weekend, the cast and creators previewed a first look at the upcoming season, and teased what the new string of episodes will be about. Apparently, Season 2 will address questions like how did America become Gilead in The Handmaid's Tale, how Offred's pregnancy will be dealt with, and what really goes on in those Colonies that we have heard about.

Before the cast and creators started talking about the new season during a PaleyFest panel on Saturday, they presented a new teaser trailer of The Handmaid's Tale Season 2. The video clip included three scenes: The first showed Aunt Lydia happily learning the news that Offred is pregnant, the second showed Ofglen (Alexis Bledel) working in the Colonies, and the final clip showed Serena Joy and Commander Waterford looking at Offred's baby in her first ultrasound and ended with a technician wishing her well by calling her June — her pre-Gilead name — and Offred discovering a mysterious key in her boot.

The real standout moment seemed to be the introduction of the Colonies, a brand new setting to the show that we have only heard mentioned in passing in Season 1. In the first season, Offred's friend Moira told her that once she was caught trying to escape Gilead, the country's officials gave her a choice between working at a brothel called Jezebels or being sent to the Colonies. The fact that Moira chose the brothel underlined just how horrendous the Colonies must be, and now we are about to see them for the first time. After her joyriding stunt in Season 1, Ofglen is now in the Colonies, and actress Madeline Brewer also revealed that Janine (formerly Ofwarren and then Ofdaniel) will also wind up in the Colonies after her attempt to steal and kill her baby at the end of Season 1.

The Colonies are described as a radioactive wasteland, in which infertile, low-class, and dissenting women are sent to live out their days in captivity performing arduous manual labor. Show creator Bruce Miller compared the Colonies to concentration camps during the panel, and the oppressive nature of the area was clear in the video clip, which showed guards wearing gasmasks watching over the women as they worked, without any protection from the implied radiation for themselves.

Along with learning a lot more about the Colonies, Season 2 of The Handmaid's Tale will also give fans a lot more information and insight into how Gilead actually came to be in the first place. The question of how Gilead was formed has become a major curiosity among fans, since Season 1 did not delve into the drastic shift from America to Gilead much at all. All we really know is that fertility rates were falling at an incredibly alarming rate in America, and that led to a totalitarian Christian government overtaking the country and imposing strict, society-shifting reproductive laws. Executive producer Warren Littlefield told the audience that fans will learn a lot more about how America turned into Gilead in Season 2.

A few other new details that the Paleyfest panel revealed about The Handmaid's Tale Season 2 include Bradley Whitford joining the cast as a Gilead commander, a new plotline will focus on the press and take place in the Boston Globe offices, and we will also learn more about both Janine and Serena Joy's lives before Gilead.

More like this
These Tweets About Regé-Jean Page Leaving 'Bridgerton' Are Royal Bummers
By Cianna Garrison
When Will 'Riverdale' Season 5 Return In 2021? Its Mid-Season Break Is Long AF
By Rachel Varina
Katie Thurston's 'Bachelorette' Season 17: Cast, Premiere Date, & More Info
By Abby Monteil
Stay up to date