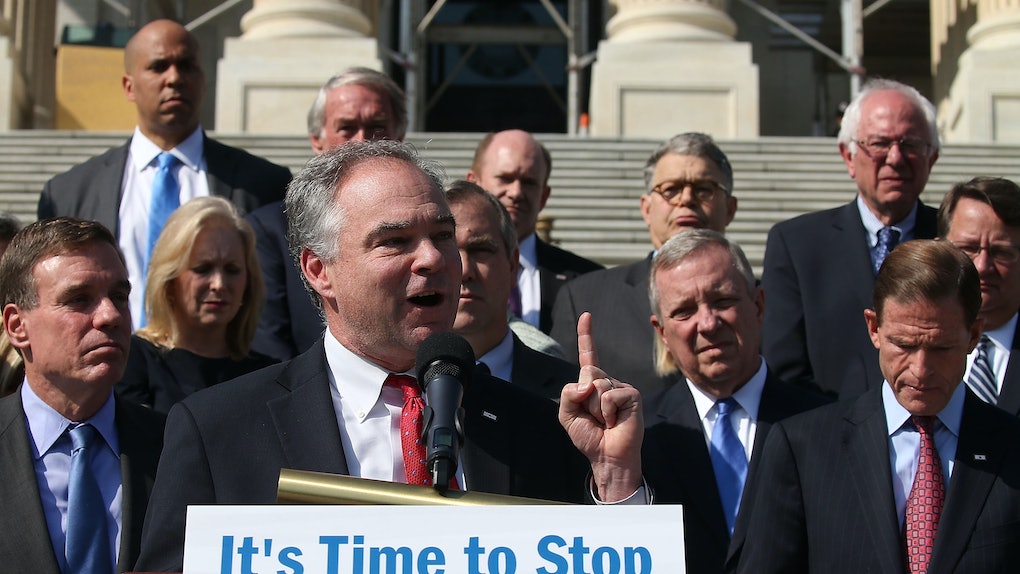 How Can We Stop Mass Shootings? There Are Laws Congress Could Pass

When a morning begins with reports of a mass shooting, you're oftentimes left wondering if there is anything that you can even do to help. After the deadliest mass shooting in U.S. history took place in Las Vegas on Sunday night, Oct. 1, 2017, you might have woken up with a feeling of helplessness once again this morning. As a nation though, there is one question we need to ask: How can we stop mass shootings?

According to an op-ed in The New York Times, there are laws Congress could pass to hopefully ensure that you'll never again have to read a headline with the words "Deadliest U.S. Mass Shooting" in the title. Nicholas Kristof writes in his NYT article that some politicians will want to react to the more than 50 fatalities and over 500 people injured by holding "moments of silence, and [leading] a national mourning," but that's not enough. He goes on to say,

Yet what we need most of all isn’t mourning, but action to lower the toll of guns in America.

But Kristof isn't just writing to criticize politicians; he's offering up solutions that Congress should consider.

Before we get to the possible solutions, there are some staggering reports that show just how serious this problem is and something needs to be done in order to prevent mass shootings from terrorizing Americans' daily lives.

In fact, according to ThinkProgress, there is a bill about to be passed by House Republicans that would, according to the article, "deregulate the sale of gun silencers, which make it harder to detect the origin of gunshots."

In an emailed press release from Everytown for Gun Safety to Elite Daily, the organization for gun violence prevention commented on the Sportsmen’s Heritage and Recreation Act (SHARE Act) that would "gut silencer safety laws." Everytown says,

During last night's horrific shooting, people fled when they heard gun shots. Instead of pushing to vote on legislation that would gut silencer safety laws and put more lives at risk, our leaders should finally come together around common-sense gun laws that will keep people safe.

According to Everytown, it's high time that something is done because, according to its research,

This is the 8th mass shooting, in which four or more people were shot and killed, so far this year, and the 162nd mass shooting since 2009.

So, what can be done to make sure these numbers don't climb? Kristof puts forth eight steps that could help prevent this kind of carnage.

Before specifying steps for Congress, Kristof points to Australia as an example of how to respond to a mass shooting. In 1996, the country suffered a mass shooting and responded by instituting tougher gun laws. Kristoff writes, that after that, according to the Journal of Public Health Policy, "the gun homicide rate was almost halved, and the gun suicide rate dropped by half."

According to Kristof, the first of some key regulations that Congress should consider is implementing universal background checks "to prevent terrorists or criminals from obtaining guns." He notes that many Americans (four out of five) support this measure.

Another measure is to enforce a ban on gun sales to individuals who are "subject to a domestic violence protection order." He explains that these people are emotional and prone to violence.

Kristof suggests limiting the number of guns one can purchase and implementing stricter rules against "straw purchasers" who buy guns on behalf of criminals.

One of his final suggestions is to invest in research that explores how we can reduce gun-related deaths.

In the end, the numbers show gun violence is a problem. Hopefully Congress can learn from this latest tragedy that actions must be taken to prevent mass shootings in the future.