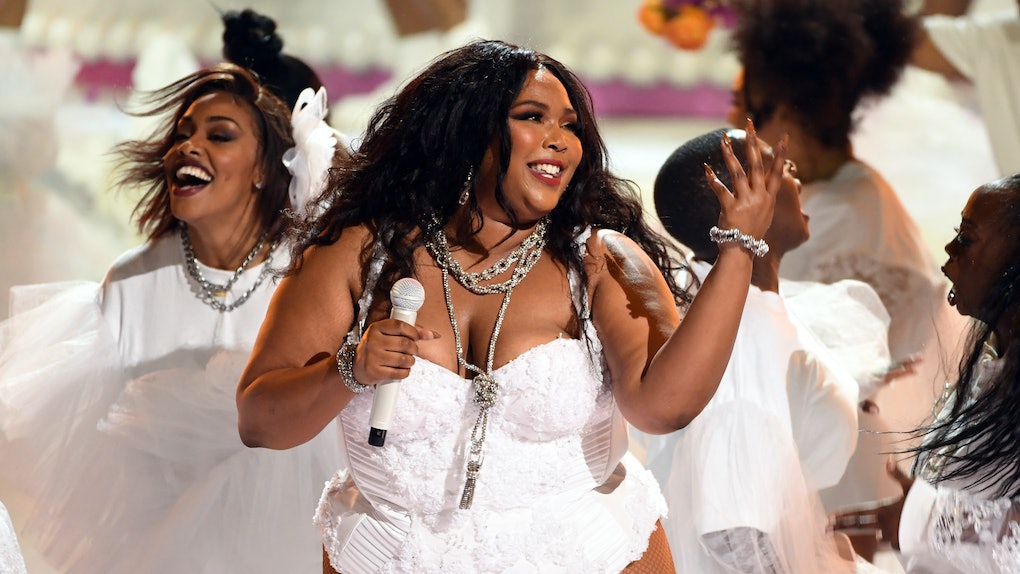 Should Lizzo's "Truth Hurts" be our country's new national anthem? Looks like Hillary Clinton thinks so. See, on Aug. 20, the flute-playing rapper/singer tweeted out a clip from a 2016 Democratic Presidential Debate featuring the then-candidates — including HRC — putting their hands over their hearts in anticipation of the "Star-Spangled Banner." Only instead of the national anthem, Lizzo's 2017 anthem about embracing female empowerment started playing. You guys have to see Hillary Clinton's reaction to Lizzo's presidential "Truth Hurts" video, because it's all kinds of amazing.

OK, so in the clip, we see the five presidential hopefuls on stage during the 2016 debate. They turn toward the American flag with their right hands over their hearts as they wait to hear, "Oh, say can you see?" But instead of the familiar lyric, the creative edit features Lizzo singing the first line from "Truth Hurts":

Why men great ’til they gotta be great?

So dope. Clinton then caught a glimpse of the brilliant edit (which Lizzo posted on both Twitter and Instagram) and decided to respond by tweeting out part of the next line of the song: "I just took a DNA test, turns out..." The rest of that next line is "I'm 100 percent that bitch," and dayum, Hills! I, for real, don't think the internet will ever be the same.

Now, let's take a look at the reaction on Twitter:

Yup, Clinton is still winning the popular vote. And Lizzo is clearly still having quite the moment. Back in July, she hit a milestone in her breakout year when "Truth Hurts" reached the top 10 on the Billboard Hot 100, even though the single was released all the way back in September 2017 without much fanfare.

“The day I released 'Truth Hurts' was probably one of the darkest days I've had ever in my career,” she revealed to People. "I remember thinking, 'If I quit music now, nobody would notice. This is my best song ever, and nobody cares.'"

It wasn't until the song was featured in the Netflix rom-com Someone Great starring Gina Rodriguez in April 2019 that the 2-year-old jam was finally embraced as a self-love anthem for single women everywhere. Now Lizzo is a legit queen who is not only nominated for Best New Artist at the 2019 MTV Video Music Awards, but will also be performing.

“Who would have thunk?” Lizzo told People. “What a moment in a movie can do for an artist is crazy. I had everything else: the hard work, the good music, touring — but then there’s that extra-special magic that nobody really knows what it is that can really change your life. Now the song that made me want to quit is the song that everyone’s falling in love with me for, which is such a testament to journeys: Your darkest day turns into your brightest triumph.”

You hear that, Hillary?

I don't know about you guys, but I pledge allegiance to Lizzo. Be sure to catch her sure-to-be epic performance when the 2019 VMAs air live from the Prudential Center in Newark, New Jersey, at 8 p.m. ET on Monday, Aug. 26.