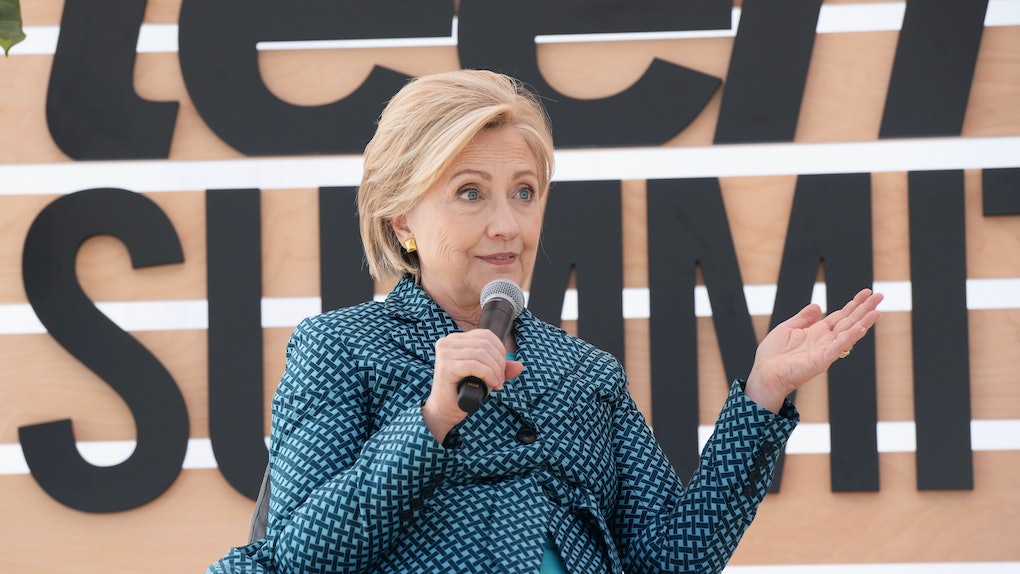 Hillary Clinton has had a hell of a year. After losing one of the most controversial presidential elections in American history, she could have withdrawn from the public eye for a decade, and most people would've understood. But instead, in true HRC fashion, she immediately went back to the business of informing, educating, and advocating for people across the United States. At the Teen Vogue Summit in December 2017, Hillary Clinton offered advice for young voters, and her words seem to be more relevant now than ever before.

While we endure a less than ideal political situation in our current White House, Clinton's conversation with attendees at the Teen Vogue Summit was focused primarily on the midterm elections in 2018, and the various ways in which young voters can work to regain influence and involvement in the political process.

We are facing a concerted effort to turn back progress. This is a well-funded, ideological, and very mean-spirited campaign to strip away rights that have been won by people over the last 50 to 60 years.

Make no mistake that the current administration and their allies in Congress want to undo a lot of that progress.

She aptly described our current political climate as "a burning house," and though "the fire's not that big yet," she emphasized the notion that it can "only be put out by people standing up, claiming their rights and their values again — and getting out to vote."

With that said, voting can (and should) be more challenging than simply picking a political party and checking every box on that ballot for each election. Voting is often especially tricky in smaller, less publicized elections, which is why the crux of Clinton's advice depends upon the notion of educating yourself about the policies that matter most to you.

Here are five simple pieces of advice Hillary Clinton gave to young voters at the Teen Vogue Summit that will not only simplify your experience in the 2018 midterms, but will get you genuinely excited to express yourself at the voting booth next year.

This is an obvious, but important piece of advice. You can't know how or who to vote for — whether it's a governor, senator, or even councilman — if you don't know what issues the person stands for.

Next November in 2018, it could not be more important to vote. Pay attention to who is running. Here in California, there are representatives who have cast votes, who will hurt people they represent. They don’t deserve to be returned to Washington.

With your help, we will be able to take back the House and the Senate and get back to real progress.

The first thing you should do is stay on top of knowing when elections are going to take place, as well as the location closest to you where you can vote. Check out the individual websites of candidates who are running for office, get familiar with what they're looking to do in their positions, and consider even reaching out to them to express your views as a constituent, and have a conversation about what you're looking for in your government, whether local or national.

Information is easy to access once you make the decision to look for it. Consider downloading an app like ThinkVoting, which is a great tool to help you keep your head on straight while considering your options in an election.

Think about it this way: You only have 24 hours in a day. Although most people care about a handful of political issues, your time and efforts are better suited diving into one or two and really getting involved in the heart of it, rather than dipping a toe across several. Whether it's gun control or abortion rights, you can take that issue, and then base your volunteer work or campaigning around that cause.

Plus, the more educated and informed you grow to be on a specific issue or two, the more likely it is that you could stoke real, tangible change.

3. Get Active In An Organization

There's only one requirement in this regard: Pick something you care about, and get involved in it. Whether it's volunteer work or full-time work, getting involved with a group of people who are looking to accomplish something that matters to you will serve a number of goals.

First, your work toward that goal will increase the chances of something actually happening. Second, your involvement with this organization will allow you to build a network of people with the same interests and passions as you. Communities can move mountains far faster than an individual can.

If you're interested in fighting for reproductive rights, for example, consider reaching out to an organization like the Center for Reproductive Rights, and ask them how you can contribute to their legal mission to keep access to reproductive health care available and safe, especially in communities that need assistance the most.

4. Volunteer On A Campaign

If you're unsure about how you can get involved or how you can make a difference, here's the first thing to remember: It's much easier than you think.

You don't need to go to Harvard Law School or personally run for office to "be involved." All you have to do is pick a campaign that seems to align with things you care about, contact a campaign rep, and ask them how you can help.

Whether it's going door to door talking about the campaign, calling donors, or even putting up signs, there's a huge range of opportunities for volunteers, depending on how much time you want to commit, and what type of volunteer work you'd like to do. The best thing to do is contact and communicate with the campaign you're passionate about to see what fits and what you can do to help.

5. Be A Focused Voter

This is my absolute favorite piece of advice from HRC, because it's a concept that is so often overlooked and misunderstood. Clinton stated her point clearly and concisely at the Teen Vogue Summit: "Don't look for the perfect campaign and the perfect candidate."

No politician is perfect, and it's a huge mistake to wait for the politician who aligns perfectly with your views. The best and most effective form of voting is when you take the issue that matters most to you, and you use it as a compass to guide you through an election.

At the Teen Vogue Summit, Clinton offered this example to illustrate her point:

Gun control is a hot issue in the United States... and though 90 percent of America wants background checks on guns, no gun control laws are passed.

Why is that? Put simply, it's because we aren't electing politicians based on their gun control beliefs.

If we can all become more focused voters, we can increase the likelihood that we'll see actual political change coming from our representatives. And in return, these representatives will feel a more significant pressure from their voter base to follow through on whatever it is they campaigned for.

The bottom line to all of this is simple: your vote counts. Democracy works at the municipal level, so don't make the mistake of thinking that a presidency makes or breaks our country. Inform, educate, and equip yourself to be the best possible citizen you can be, and bring as many people along with you as you can.