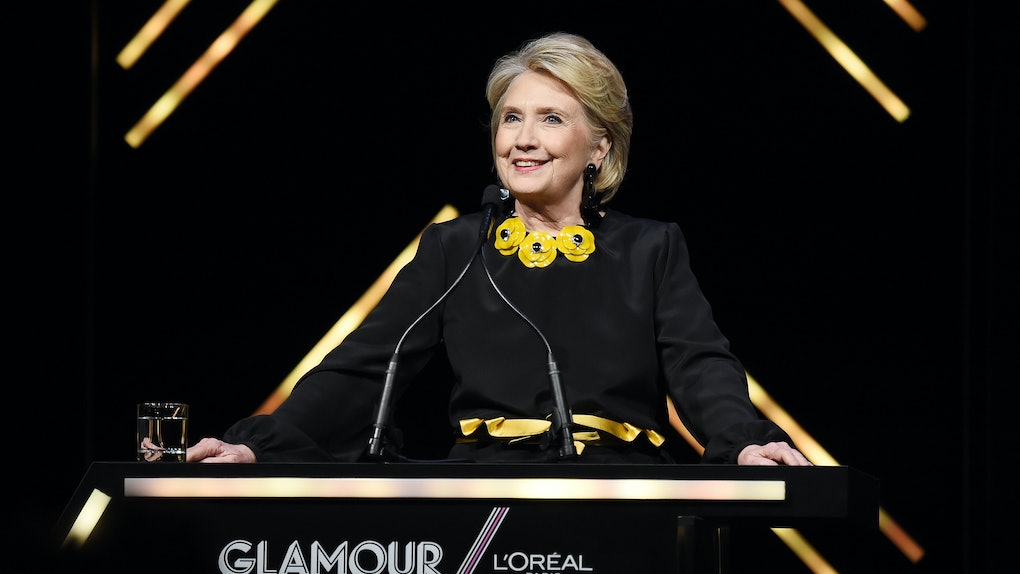 One week after Election Day, Georgia's race for governor has only been heating up. Since the polls closed on Nov. 6, tensions have risen between candidates Democrat Stacey Abrams and Republican Brian Kemp in a race that still hasn't been called. With Kemp in the lead as of Nov. 14, according to the The New York Times, allegations of voter suppression have arisen. Now a former presidential candidate has jumped in to have Abrams' back. Hillary Clinton said Stacey Abrams would've already won in a fair election, and she might have a point.

"If she had a fair election, she already would have won," Clinton said while speaking at the University of Texas' LBJ School of Public Affairs on Tuesday, Nov. 13, according to The Statesman. A representative for the Georgia secretary of state's office, which oversees elections, did not immediately return a request for comment on Clinton's statement.

Georgia's race for governor has been highly watched, as if Abrams manages to beat out Kemp, she would become the first African American female governor in the history of the United States, according to The Hill. Per The New York Times, the vote count as of Nov. 14, has Kemp in the lead with 50.3 percent of the vote, and Abrams at 48.8 percent. However, Kemp has been accused of allegedly using his role as Georgia's secretary of state, which oversees elections, to suppress votes, according to The Hill. Kemp stepped down from his position following Election Day. In October, nearly a month before the general election, the Associated Press reported that nearly 53,000 voter registrations in the state had been placed on hold, 70 percent of which were from black voters, due to the so-called "exact match" law which required voter registration applications and state records to match exactly and would dismiss applications over typos and small details such as accents on names. In some areas, even if you were able to get a ballot, there was no guarantee it would be counted — In one county, hundreds of absentee ballots were thrown away due to "discrepancies" between the ballot and registration info, per CNN.

In a statement provided to Elite Daily in October, Candice Broce, a representative for the Secretary of State's office, says that the responsibility for judging eligibility for absentee ballots lay with local officials, and that the secretary's office had opened an investigation into the issue. She also referred to litigation around the exact-match law as a "publicity stunt" saying,

Their claims are bogus. It is a complete waste of our time and taxpayer dollars. ... There are no voter registration applications 'on hold in Kemp’s office, and every single pending voter can vote in the November 6th election. Any claims to the contrary are politically motivated and utterly false.

On Monday, Nov. 12, Judge Amy Totenberg, a United States District Judge for the United States District Court for the Northern District of Georgia, ruled that the state of Georgia must conduct a "good faith review" of all the provisional ballots — given to people who, for instance, are at the wrong polling place or missing ID, which are held aside to be reviewed and counted after the voter's eligibility is confirmed — that were previously rejected based on the fact that the voter's name was not found on the registration list, according to CNN. This means that instead of just cross-referencing using only the voter registration list, the state must use "all available registration documentation." CNN also reports that as part of the review, the state must create a hotline for voters to call in to see if their provisional ballot was counted and if not, why. Totenberg ruled that the state's election officials cannot call a winner before Friday, Nov. 16 at 5 p.m. ET, according to The Hill.

The question over possible voter suppression doesn't end there. The very next day, Tuesday, Nov. 13, U.S. District Judge Leigh Martin May ruled that Georgia's Gwinnett County's rejection of absentee ballots based only on an omitted or incorrect birth year was a violation of the Civil Rights Act. Per the ruling, the county will have to review rejected ballots and count them in the 2018 midterms. Elite Daily reached out to representatives of the county for comment on the ruling, but did not immediately hear back.

If there are enough uncounted votes for Abrams in all those rejected provisional and absentee ballots — per NBC, she would need a net gain of 21,000 votes — then there will be a run-off on Dec. 4, which means that there will be another election to determine whether Kemp or Abrams will take the post as governor of Georgia.

Abrams seems confident about a possible run-off. According to a Nov. 9 tweet from her campaign manager, Lauren Groh-Wargo, the Abrams campaign has already purchased television ads for the runoff in an attempt to "prepare for all possibilities."

It seems Clinton and two judges both feel that the elections might not have been totally fair to Abrams, but there's still time for her to pull out a victory and make history.