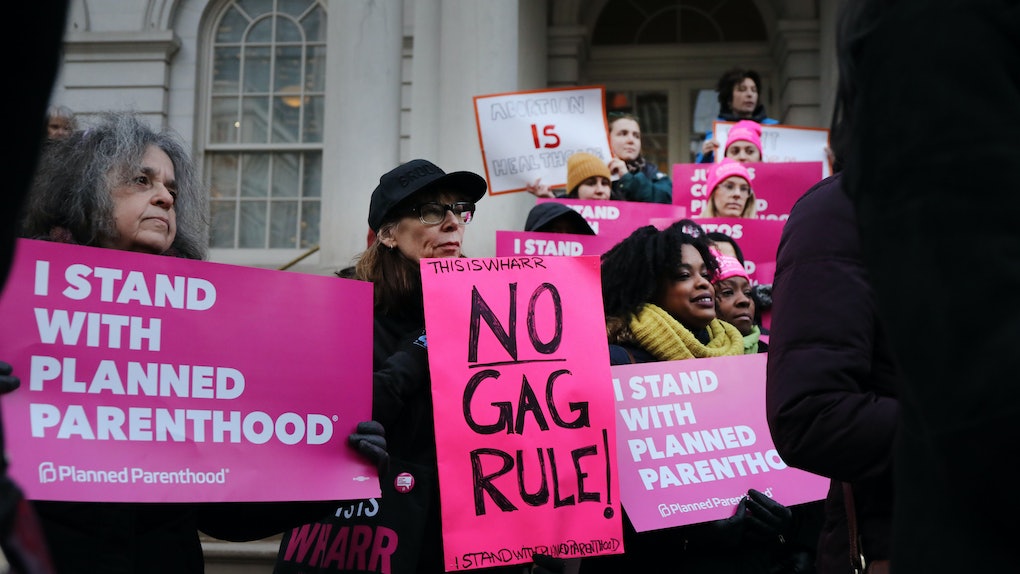 Here's Why Planned Parenthood's Withdrawal From Title X Is So Troubling

It's been a possibility for awhile, but on Aug. 19, it was confirmed. Planned Parenthood is withdrawing from Title X, the federal program that supplies funding for family planning and birth control services, over the Trump administration's domestic gag rule. The reproductive health service announced the decision Monday, adhering to a deadline set by the Trump administration as legal challenges against the gag rule continue. It's a major change, and one that is projected to have significant effects on those who rely on Planned Parenthood for health care.

In February 2019, the Trump administration released the final version of a change to the Title X Family Planning Program, which provides funds to support access to birth control, family planning, and preventative health care measures such as STI testing and cancer screenings. Under the new rule, organizations and health care providers who receive Title X funds would be prohibited from referring their clients for abortion services. Providers would also be required to maintain a "physical and financial separation" between any Title X-funded care and any abortion-related care, including by having services housed in separate locations or facilities. The rule was quickly dubbed the "domestic gag rule," as critics, including the American Medical Association, said it would force health care providers to withhold information about options from patients and interfere with the doctor-patient relationship.

The rule change quickly gave rise to legal challenges, with Planned Parenthood and more than 20 states filing a lawsuit to block the rule change. However, a federal appeals court ruled in July that the change could go into effect while the legal fight continued, per CNN. The U.S. Department of Health and Human Services (HHS) required all organizations receiving Title X funds to offer assurance they would adhere to the change by Aug. 19. Planned Parenthood instead chose to withdraw, saying in a tweet that the Trump administration was "forcing [them] out" of the program.

In a statement shared with Elite Daily, HHS said that grantees knew about the change in advance and had the choice to decline the grant if they did not want to comply with the new rule. "Some grantees are now blaming the government for their own actions — having chosen to accept the grant while failing to comply with the regulations that accompany it — and they are abandoning their obligations to serve their patients under the program," it read in part. The statement did not mention Planned Parenthood by name.

In terms of pure numbers, Planned Parenthood's withdrawal is likely to have a major effect, and particularly on young people. Per The New York Times, Planned Parenthood serves about 40% of the 4 million people who rely on Title X services, and many of those 4 million people are young. According to Diana Thu-Thao Rhodes, director of public policy for Advocates for Youth, some 39.1% — or over 1.5 million people — relying on Title X are under age 25. "This hugely impacts a wide range of folks, including young people, low income folks, and folks of color,” Rhodes tells Elite Daily. "Those who are most marginalized when it comes to accessing health care, and also those who are most marginalized when it comes to health disparities, are often the ones who are accessing Title X clinics and clinics that receive Title X funding."

Rhodes is concerned that the absence of major players such as Planned Parenthood will create space for misinformation or inadequate care to spread — and funding that can be redirected to incomplete services. She says that, anecdotally, a lot of the young people who Advocates for Youth work with access their reproductive health care at Planned Parenthood. "With the rise of fake health centers ... that are strategically placed near universities and college campuses," she says, "this opens the door to those fake health centers or crisis pregnancy centers to be receiving more Title X dollars — and opening the door for young people to not be receiving the information and services that they need."

Rhodes advises young people to be aware of where they are turning for their reproductive care and what kinds of services those organizations do or don't provide, and then share that. "Look up what health clinics exist in their area, on their campuses, what services are being provided by their student health center," she says. "Really expose what organizations in their communities are crisis pregnancy centers, or centers that provide a full range of services."

Because hope is not by any means gone. Rhodes says, "What I know is that our young people are definitely working to move this country, and their communities, and their peers, forward — and not backward."