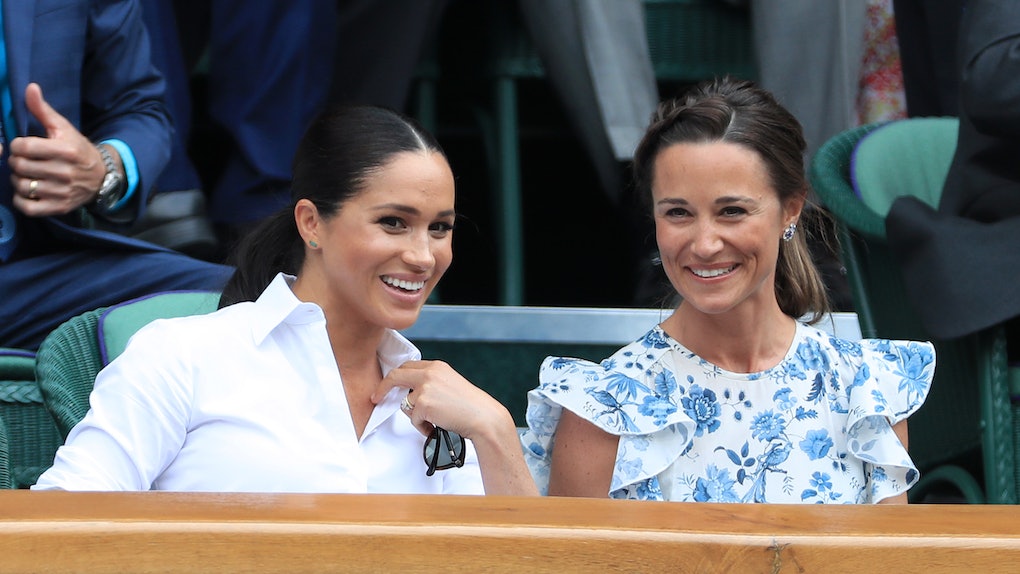 Many revelations have come out of Omid Scobie and Carolyn Durand's new royal biography about the Duke and Duchess of Sussex, Finding Freedom. When the book released on Tuesday, August 11, never-before-heard stories about the royal family made headlines, with much of the focus on Prince Harry and Duchess Meghan's step back from their senior royal roles. But Finding Freedom's claims that Pippa Middleton hesitated to invite Meghan Markle to her wedding in will frustrate you. Elite Daily reached out to Pippa's rep for comment, but did not hear back by the time of publication.

Pippa Middleton became the talk of the town in April 2011 when all eyes turned to her since she was her sister Kate Middleton's maid-of-honor at her wedding to Prince William. Pippa stunned in a fitted white gown, and instantly fans were smitten with Kate's little sis. In the years that followed, Pippa found love with James Matthews, and, obviously, fans found themselves invested in the couple's romance.

Pippa and Matthews wed in May 2017, and while it was an entire year prior to Meghan and Harry's royal wedding, the Celebrate author reportedly had some reservations about extending an invite to the Sussexes.

“The media frenzy that followed their every move made them somewhat of a reluctant addition to the guest list for Pippa Middleton’s vows on May 20, 2017,” Scobie and Durand explained in Finding Freedom. “Both the bride and her mom, Carole, privately harbored concerns that the American actress’s presence alongside [Prince] Harry might overshadow the main event.

Of course, everyone wants their wedding day to be about them and only them, but it must be frustrating for Meghan to have to deal with concerns about "overshadowing" others simply for... showing up.

In any case, to keep the focus on Pippa, Meghan reportedly decided to not attend the wedding, while Harry reportedly made a last-minute decision to fly solo to the nuptials. Entertainment Tonight reports Meghan, did, however, quietly attend the reception. Pippa and Matthews later welcomed a son, Arthur Michael William Matthews, in October 2018.

Despite the wedding-invite-list situation, it seems Pippa and Meghan are not on bad terms. Pippa and Matthews celebrated Meghan and Harry at the couple's May 2018 wedding, and the girls were all smiles as they attended Wimbledon with Kate in July 2019.