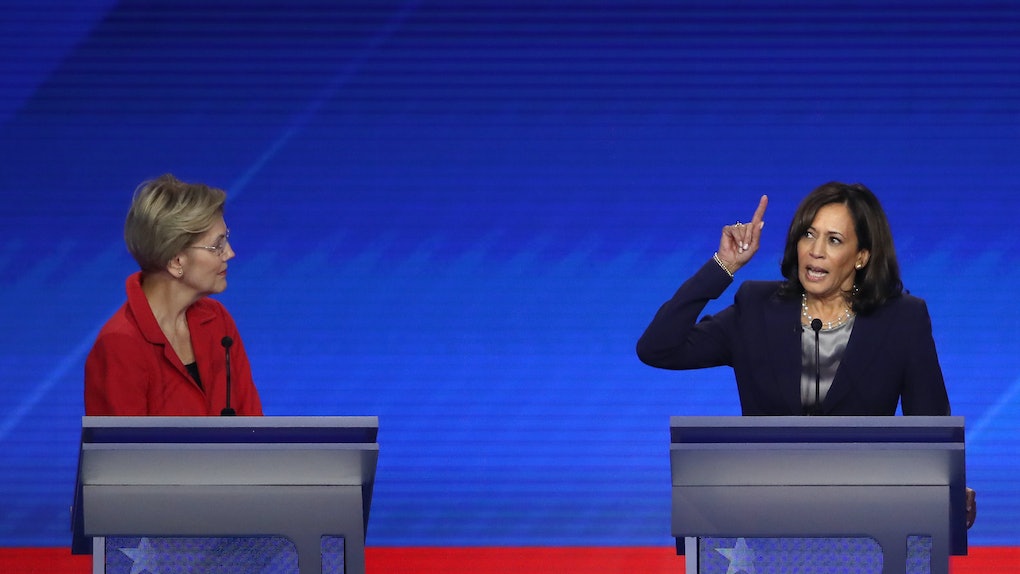 As of 2019, there’s one clear and definitive thing you can say about American politics: 45 out of 45 U.S. presidents have been men. And unfortunately, what you see is what you believe — or at the very least, what you get used to. Internal biases are insidious and difficult to spot, which may be why it can feel startling when Sen. Kamala Harris uses female pronouns to talk about the presidency But why does one small difference — the change from a he to a she — hit so hard?

Harris has made a point of frequently using female pronouns in reference to the presidency during her campaign for the Oval Office. In an early debate on June 27, Harris emphasized the possibility a woman might take on the responsibilities of the office. "I will ensure that this microphone, that the president of the United States holds in her hand, is used in a way that is about reflecting the values of our country," she said. And again on Oct. 15, Harris commented on the role of the president as commander-in-chief and referred to the president as a woman. “The commander-in-chief of the United States of America,” she said, “has as one of her greatest priorities and responsibilities to concern herself with the security of our nation and homeland.” She was responding to a question about President Donald Trump’s decision to withdraw American troops from Syria on Oct. 13, but the framing of her answer said a lot more.

Harris' choice to use these pronouns could have a much longer-lasting effect than creating a viral moment. “Neuroscience and linguistics tell us that language is very closely associated to how we see things,” says Nancy Cohen, an expert on gender in politics and the author of Breakthrough: The Making of America's First Woman President. “When she says 'she,' it’s really, seeing is believing, right?” Cohen notes that simply by virtue of the fact that all presidents have been men, in an office designed by men, Americans can't help but associate the role with, well, men. But by projecting femaleness onto the office of the presidency, Harris encourages her listeners to actively imagine a woman in that role. “[She’s] inviting us to question our assumptions that when someone says 'president' they see a man,” Cohen sums up. “It pushes against this electability argument that’s so powerful.”

How we use language is intimately linked with how we understand ourselves and see ourselves.

While language doesn't dictate the way we think, experts think it can help shape it. Scientists have long suspected the language or languages a person speaks can influence the way they see the world, or affect their interactions with others. Individual languages may also have words for things their culture values, but those words don’t exist in other cultures. An example is the hygge trend, a Danish concept of cozy comfort, which many American English speakers didn’t have a name for — or a desire to prioritize — until it hit the internet with the force of 1,000 chunky sweaters. But while hot tea and fuzzy socks may be a charming example of language in effect, the impact of language on politics can go further.

“Language is so closely linked with identity,” says Dr. Mary Lynne Gasaway Hill, a professor of English Literature and Language at St. Mary’s University, whose research focuses on language, gender, and power. “How we use language is intimately linked with how we understand ourselves and see ourselves … and how we engage with the world." Hill notes again that while language doesn’t determine thinking, it does help mold it. She calls the choice to use female pronouns a “terrific strategy” for Harris to both build solidarity with progressive voters and to distinguish herself from the other candidates on the stage. “You were not the only person in the United States or around the world going, 'Oh my gosh, it’s about time somebody used traditional female pronouns in regard to this particular office,’” Hill laughs.

Cohen notes that Harris' choice could have an impact on the notion of "electability," and who Americans are willing to put in the Oval Office. Those female pronouns, she says, are "like a ping to us that our minds form an image of a man when we hear 'president.'" As Nate Silver of FiveThirtyEight suggests, the idea of electability may create a feedback loop in which white men are considered more electable than women and people of color just because that's who Americans have seen elected. But a June 2019 report from the Reflective Democracy Campaign broke down data in elections from 2014 to 2018 and found when women and people of color can get on the ballot, they are elected at the same rate as white men.

Everybody’s views of what a president can be are going to be changed.

In an Oct. 2 interview with Buzzfeed, Harris said that the debate around electability drove her "bananas." That was why, she told the publication, she uses these pronouns so intentionally. "It’s important for people to understand that they have to really check how they're thinking about these things," she said. "But we have to help along the way, and part of it is about how we use language.” Harris' team did not respond to Elite Daily's additional questions about her use of pronouns.

Breaking down those mental barriers around expectations can have significant effects down the road, as well. As of November 2019, there are five women running for the Democratic nomination for president — Sen. Elizabeth Warren of Massachusetts, Rep. Tulsi Gabbard of Hawaii, Sen. Amy Klobuchar of Minnesota, self-help author Marianne Williamson, and Harris herself. According to Cohen, just seeing those women as contenders can have a powerful impact. “There’s strong research in political science that the role model effect is real,” she says. “Whether Harris makes it or not, or Warren makes it or not, everybody’s views of what a president can be are going to be changed by these multiple strong women candidates in the race.”

There’s an expectation that language is somehow neutral.

While both experts think the choice — and it is a choice — to use female pronouns is significant (Cohen in particular calls it a “bold move”), that doesn’t mean it comes without risk. According to Hill, the fact that language is so tied to identity means when someone challenges language patterns, it can result in a backlash. “There’s an expectation that language is somehow neutral, and that you should just use the words the way they’re supposed to be used,” Hill says. Changing that up can make people feel uncomfortable, or alienated in ways they can’t or won’t admit. “The backlash — I could see people tapping into old, ‘uppity feminist’ stereotypes,” she says, or breaking out accusations of “man-hating.”

Harris will have more chances to change America's mind about who is electable as president. On Nov. 20, she'll take the stage for the fifth Democratic debate in Atlanta, Georgia, and pitch her version of "Madame President" to all of America.