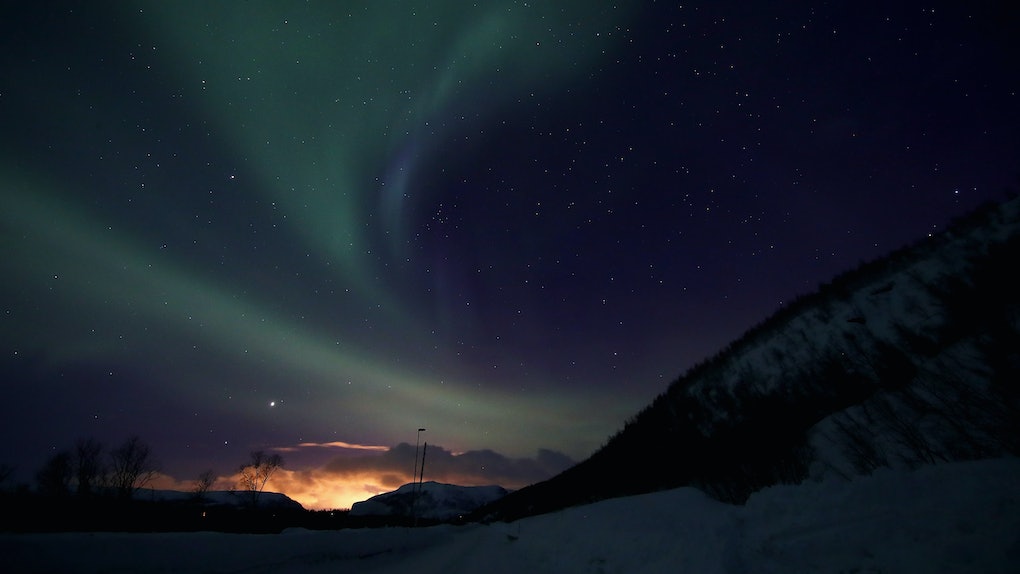 At the ripe age of (almost) 24, I have yet to see quite a bit of earth's natural phenomena. There are so many national parks I plan on hitting up in the somewhat near future, I'd absolutely love to snorkel along the Great Barrier Reef. Most importantly, I'm dying to catch the Northern Lights. If you're living in the United States, though, tonight could be your night to sneak a peak at those Aurora Borealis. Yep, you heard me. So if that tickles your fancy, here's where to see the Northern Lights in June. You have geomagnetic storms to thank.

On Friday, June 1 through Saturday, June 2, residents in northern U.S. states including Montana, North Dakota, Wisconsin, Michigan, Minnesota, and Maine will most likely be able to see the Northern Lights, according to the Space Weather Prediction Center (SWPC). Southern Canadian territories in British Columbia, Saskatchewan, Manitoba, and most of Ontario and Quebec will also most likely be able to see them. Luckily, no Jon Snow-esque furs will be necessary in this particular viewing, since it's the beginning of freaking JUNE (and also, you won't have to trek to the Arctic Circle). This is basically the most exciting news I've yet to hear all year long. Aurora Borealis, here I come!

As you might already know, the Northern Lights aren't usually visible this far south, or this late in the year. According to Space.com, the best time to see them is usually between winter and spring, and the ideal place to see them is usually in Northern Europe, Northern Canada, Alaska, Iceland, or the Arctic Circle. However, per the SWPC, the lights are predicted to be visible in northern U.S. states because of a minor G1 geomagnetic storm. Said storm is apparently a-brewin' due to recent high-speed solar winds, and even though that sounds pretty serious, the solar activity is expected to be pretty low. So the only side effect should really be extended Northern Lights visibility, and I'm definitely not mad about that.

That being said, whether or not you'll actually be able to see them all depends on weather conditions. Northern U.S. residents probably won't be seeing too much if skies are cloudy, according to Space.com. In fact, with excess fog or clouds, you most likely won't be able to see them at all, since ideal Northern Lights-viewing conditions normally take place with totally clear skies. I had really been hoping for some stellar beach weather this weekend, and now I'm definitely praying that it lasts through the night. Catching the Northern Lights down here would be absolutely incredible.

If you don't have the opportunity to #RoadTrip it up to Maine or Michigan this weekend (because, same), you can get frequent updates with SWPC's 30-minute Aurora Forecast. You can also use Aurorasaurus, which is basically just a crowdsourced Aurora tracking app, according to Thrillist. Regardless if you actually plan on seeing them, it's still pretty dope to see where it is and what it's looking like. I'd definitely recommend checking these out.

Surprisingly, this isn't the first time the Aurora Borealis have trickled down to the States. Back in mid-March, the SWPC predicted a G1 geomagnetic storm to occur on Wednesday, March 14, and on Thursday, March 15. Similarly, the Aurora Borealis were made slightly more visible for those living in Montana, North Dakota, Minnesota, Wisconsin, Michigan, and Maine, so clearly it's time to move up that way ASAP.

Seeing the Northern Lights this far South (and this late in the year, for that matter) is pretty rare, you guys. I may or may not be planning a road trip up to the Pacific Northwest for tonight. Er, well, maybe Maine is a tad more realistic. Regardless, if you're down to tag along, start making an epic playlist, and bring all of the road snacks. Being able to check this off my bucket list feels so close, I can almost taste it.

More like this
What Is Boo Bash At Disney World? The Halloween Event Has Rides, Music, & Themed Treats
By Cianna Garrison
Here's Where To Buy Naturdays Pineapple Lemonade Beer To Unleash Your Summer Vibes
By Cianna Garrison
These Tweets About How "Cheugy" Was Sold As An NFT All Point Out This 1 Thing
By Daffany Chan
Stay up to date