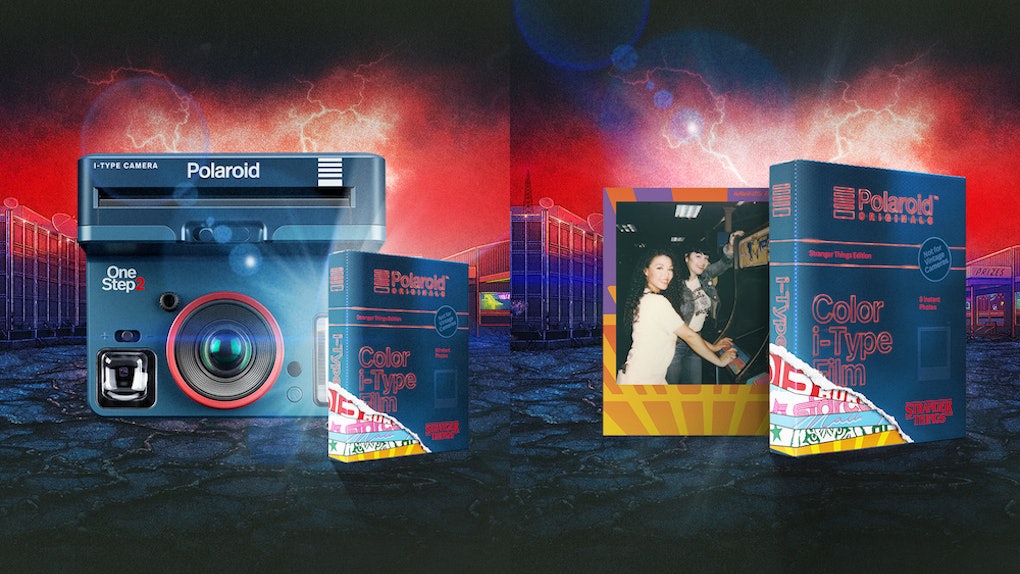 When you're living in the ~smart phone age ~, taking digital photos is probably pretty normal for you and your friends. But IMO, there's truly nothing better than snapping some good old-fashioned Polaroid pics to hang on your wall. And just in time for the premiere of Stranger Things Season 3, the brand known for their instant film and adorable on-the-go cameras is coming out with themed gear to document all your warm-weather memories. So if you're hyped to reunite with Eleven and the gang, here's where to get Polaroid's Stranger Things camera and film to take on all your summer adventures.

The Stranger Things-themed camera itself is super retro (a nod to the show's '80s setting!) boasting bold red and blue colors. And while the look of the camera is rather vintage, the inner workings of the camera are incredibly new and hi-tech. According to the press release, it includes a fixed-focus lens, a powerful built-in flash, USB charging, and a self-timer. The battery lasts up to a full 60 days (perfect for those camping trips, bike rides, and long-term adventures), and the high quality lens guarantees a super clean shot. It will cost you $109.99 on the Polaroid website, and it's bound to turn your world upside down, if you know what I mean.

Then, there's the film itself, which is absolutely vital in capturing all of those stranger moments with the gang. Each pack of eight will include a total of 16 graphic design prints, according to the press release, and will cost you a total of $16.99 per roll on the Polaroid website. Whether you're bringing it back to Hawkins Middle School Class of '85, or if you're simply hangin' in Joyce Byer's iconic living room is entirely up to you. If you ask me, these are totally tubular.

Polaroid's Stranger Things camera and film will leave you feeling way too cool for school. And the best part is you can start stocking up now. That's right — both became available in stores and on the Polaroid website as of May 6, according to the press release. So if you were thinking about what to get me for my birthday... definitely consider this *wink wink.*

If you haven't watched the new Stranger Things trailer a thousand times already, it definitely does not disappoint. While it doesn't include any actual footage from the upcoming third season, per se, it definitely gives some insider information in regards to what's happening in Hawkins. All Season 3 episode titles were released early to give you a little insight, and the teaser confirms that Season 3 will only include 8 episodes. I'm nervous as heck, but I'm expecting the best for Eleven, Mike, and the rest of the gang. Fingers crossed.

Whether you're hunting down that nasty Demogorgon, or if you're transporting to another dimension, Polaroids are a fun and simple addition to any and all summer escapades. And with new Stranger Things-themed OneStep 2 Polaroid cameras and Polaroid film, the brand is definitely taking things up a notch. This is getting me hyped, y'all — Season 3 seriously could not come sooner.