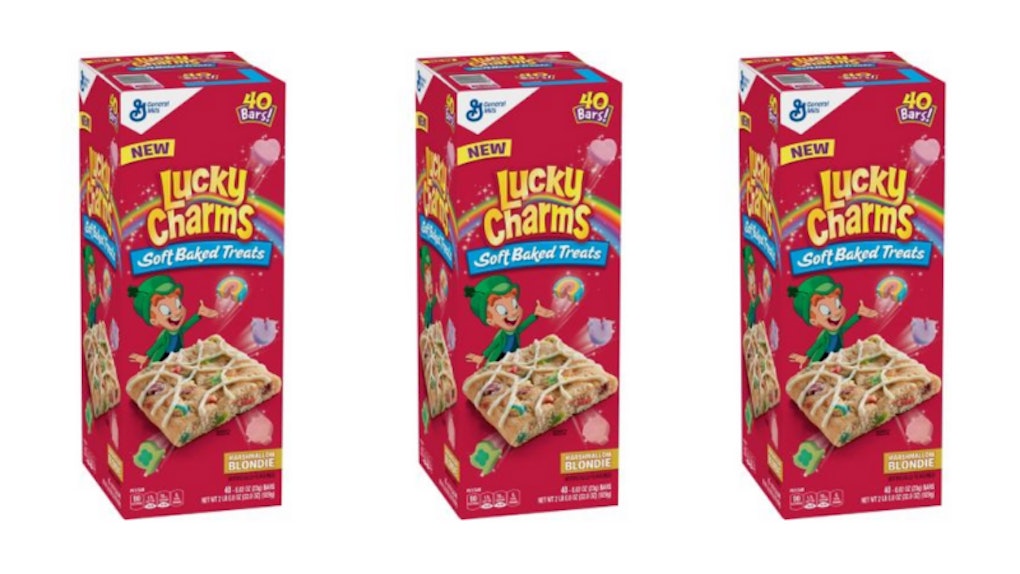 Rejoice, '90s kids, because your favorite bowl of marshmallow-topped cereal has gotten a sweet makeover. General Mills, aka the scientists behind delicious creations like Cocoa Puffs and Cinnamon Toast Crunch, has transformed its signature Lucky Charms cereal into blondie form, making it so easy to keep those good vibes going way past breakfast. If you want to take your tastebuds on a magical trip down memory lane, no spoon needed, here's where to get Lucky Charms' Soft Marshmallow Blondies for a sweet twist on your morning eats.

If you grew up starting your day with a bowl of Lucky Charms, you're probably no stranger to all the leprechaun-approved bites and sips that have come out in recent years. General Mills has no shortage of Lucky Charms-infused products, from Lucky Charms Marshmallow beer to a marshmallow-only cereal (because, let's be real, the marshmallows are the best part), and its latest offering, Lucky Charms' Soft Marshmallow Blondies, are a tasty addition to the current lineup.

Blondies are basically just like a brownie, minus the chocolate. Instead of the rich chocolate that you'd get in a brownie, the recipe for the chewy dessert bar swaps it out for vanilla — which happens to be the perfect accompaniment for your Lucky Charms. As much as I love chocolate, I think we can agree that combining the two elements wouldn't be quite as good as with a vanilla cookie base. And, judging from the photos, I think you'd happily swap out your milk and cereal for one of these bad boys. In short, it looks like the stuff that breakfast dreams are made of, and it's just an added bonus that you don't need a spoon to dig in to this sweet treat.

According to the packaging, the Lucky Charms Soft Marshmallow Blondies look almost like shortbread squares with multi-colored marshmallow chunks sprinkled throughout. The (literal) icing on the cake is a white drizzle on the top, which I'm hoping is some kind of marshmallow-based sauce to tie it all together. Each package of Lucky Charms Soft Baked Treats comes with forty of these bad boys, so you'll have more than enough to share with bae and your besties. However, something tells me that you won't want to share these sweet treats, so I'd recommend stashing them away and bringing them out whenever you're in the mood for a taste of your childhood.

According to Popsugar, these goodies are currently retailing at Walmart, BJ's Wholesale, and Sam's Club, so I'd make sure to shop around these retailers for the best price. Right now, it appears that the lowest price per package is $9.99 at BJ's Wholesale. I did the math, and that's just 25 cents per Lucky Charms Blondie. I mean, who wouldn't pay a quarter to dig into a cookie that's studded with chunks of your favorite cereal?

Unfortunately, there's no telling how long these bad boys will be available at retailers, so I'd make sure to scoop up a package (or four) during your next grocery store run.