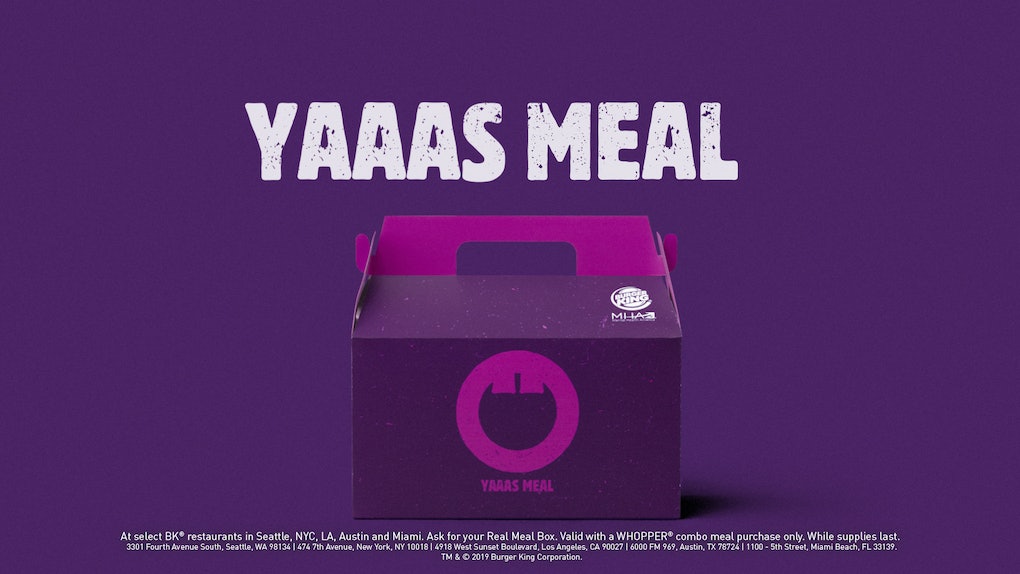 No one is always happy, and Burger King gets that. On Wednesday, May 1, the company unveiled "Real Meal" boxes that'll help you reveal your true emotions (whether you're super excited about something or truly DGAF). In order to score a box, you'll have to order a Whopper meal at a select Burger King location. If you like Whoppers (and clever packaging), you might be wondering how to snag one. Well, read on to learn where to get Burger King's Real Meal Whopper boxes. Thankfully, the company provided a list of cities where you can score a box for yourself.

According to Burger King, you'll be able to grab a Real Meal at select BK locations in New York City, Los Angeles, Miami, Seattle, and Austin. (For exact addresses of participating restaurants, click here.) As I briefly mentioned, you'll have to order a Whopper meal when you visit a participating location in order to get a limited-edition Real Meal box. Luckily, Whopper meals are delicious (if you like big, juicy burgers, that is).

If you haven't had a Whopper meal in a while, allow me to refresh your memory. According to Burger King, the Whopper meal includes a Whopper sandwich, fries, and a drink. Again, if you order one at a participating Burger King location, you'll receive it as a Real Meal.

Now that you know where to get a Real Meal, you might want to know a little bit more about 'em. I'll start with the boxes, though. According to Burger King, Real Meals come in five different variations, which include the Blue Meal, Pissed Meal, YAAAS Meal, Salty Meal, and DGAF Meal. Each meal showcases an emotion felt on the reg by everyone.

As clever as the boxes are, you might be wondering why Burger King decided to create them in the first place. According to a press release, the company wanted to encourage its customers to feel however they want to feel, aka "feel their way."

Whether they're feeling happy, sad, pissed, or salty, they'll be totally accepted at the fast food joint.

In order to make this campaign possible, Burger King partnered with Mental Health America, a leading U.S. non-profit organization that focuses on bringing attention to mental illness. Since May is Mental Health Awareness Month, the company decided to launch Real Meals on May 1. Now, customers can visit select locations and honor the cause when they order a Whopper meal.

To further promote Real Meals, Burger King released a film on YouTube which showcases the raw emotions that people feel on the reg (FYI, "happy" isn't one of 'em). The authentic footage first shows people facing difficult scenarios and experiencing emotions like stress, frustration, and anger. Then, it switches gears and shows those same people celebrating their emotions, because they're allowed to "feel their way."

The video is called #FeelYourWay, and you can check it out below:

If you're hoping to pick up a Real Meal box and feel your own way, head to a participating Burger King location and order a Whopper meal. Just keep in mind that the boxes are only available while supplies last.