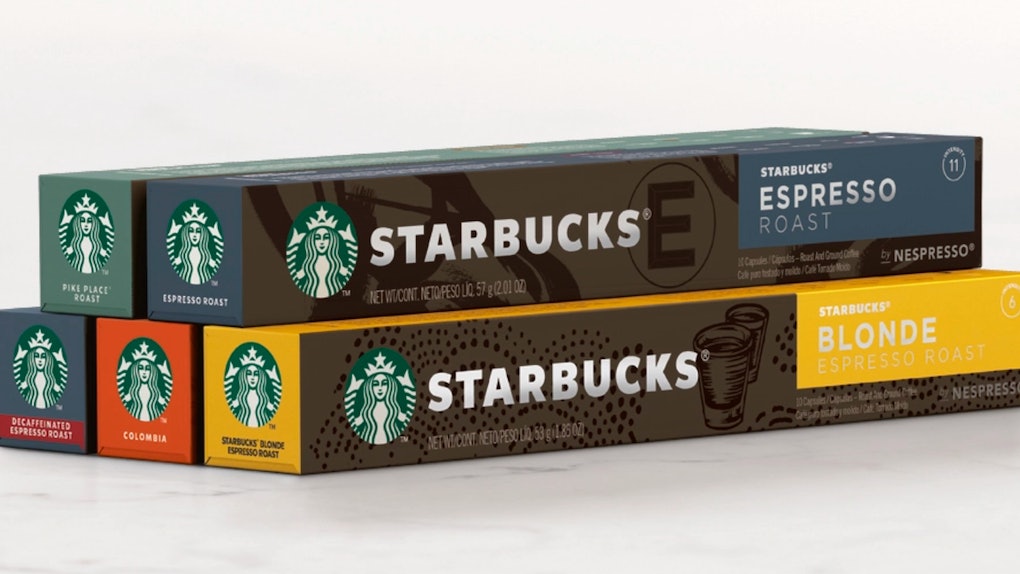 Let's be real: As much as I like going on Starbucks runs during the week, leaving my apartment and the comfort of my couch during the weekends for anything — even a steaming mug of hot coffee — sounds like the least appealing thing ever. Luckily, instant coffee capsules are a convenient in-between to fuel your mornings, and I was pumped to learn that Starbucks by Nespresso capsules are now available for purchase. Here's where to buy Starbucks by Nespresso capsules so that you can brew your favorite espresso-infused blends in the comfort of your own home, no showering or pants necessary.

Back in August 2018, Sbux stans will remember that Starbucks and Nestlé announced that they were teaming up to bring their Starbucks by Nespresso line — made of ethically sourced, 100% high-quality arabica coffee — to the world.

Now, according to a Starbucks rep, the four specialty blends are currently available for purchase on Amazon, Walmart.com and Jet.com beginning in early May 2019, meaning that customers can get a first taste of the revamped, albeit still familiar, offerings.

For example, Starbucks' Pike Place Roast — which was originally crafted in 2008 to commemorate the coffee giant's very first storefront in Seattle’s Pike Place Market — is part of the lineup. Per press materials, "The flavor has subtly rich hints of chocolate and toasted nut notes that make it the ideal coffee to enjoy at any point throughout your day."

Considering that the blend (described as a "smooth, well-rounded blend of Latin American coffees") is a mainstay at almost every Sbux location, it's not surprising that the team decided to bring it to Nespresso capsule form.

Another familiar option is Starbucks' Single-Origin Columbia, which is described as having "a round body, juicy taste and signature nutty finish, giving an elevated boost to your cup of coffee."

For customers who are looking for brews with an infusion of espresso, there are also two tasty options that fit the bill there. Starbucks signature Espresso Roast, which seamlessly blends "molasses and caramelized sugar notes" into your coffee, is available, as if a decaf version of the Sbux classic.

Last but not least, a Starbucks Blonde Espresso Roast rounds out the four options by offering a more mellow and smooth version of its classic espresso by using a "special blend of beans from Latin America carefully roasted to coax out sweet, vibrant notes" and highlighting the sweet notes in the milk. Per the press materials, you can expect an extra smooth version of your classic espresso drink without the "roasty edge" that usually characterizes such beverages.

In short, there's something for literally every taste and preference in the group.

Tony Matta, President of Nestlé Starbucks Coffee, explained in a press release about the company's lineup:

Unfortunately, the Starbucks by Nespresso capsules won't be available at brick and mortar store locations until late 2019, but 10-count capsules of all four offerings will be retailing for about $9.99 online (although pricing depends on the retailer), per the Starbucks rep. I'd recommend comparing costs on Amazon, Walmart.com and Jet.com before ordering, then having some fun with Starbucks' recommended Nespresso-based drink recipes when they arrive at your door. One thing's for certain: Your mornings are about to get a whole lot tastier.