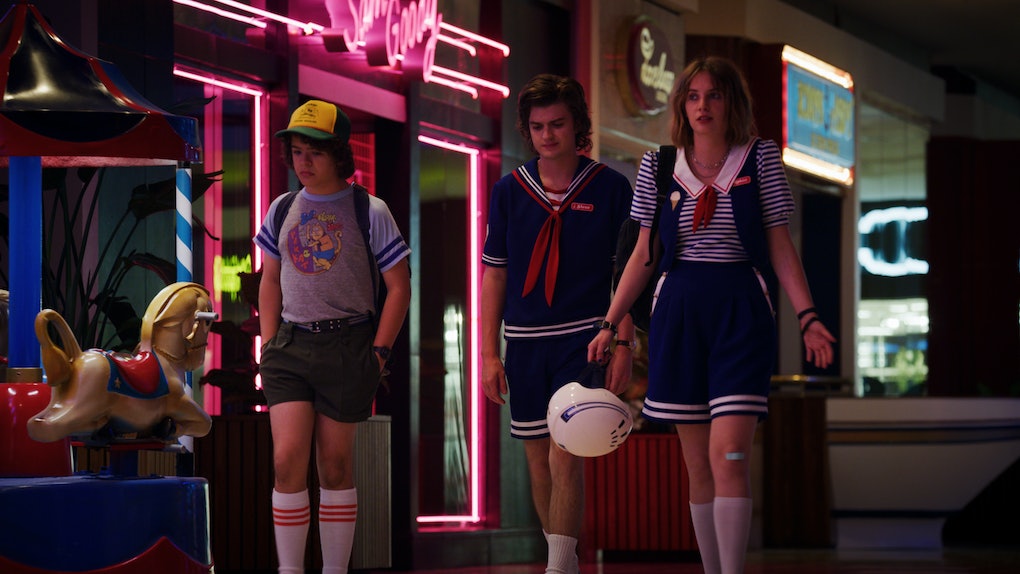 This post contains spoilers for Season 3 of Stranger Things. Monsters are always aplenty in Hawkins, Indiana, and it being summer vacation is no exception to this fact. While Eleven and her friends are always quick to decipher the creatures' origins and intents, it can be a little tricky for fans to keep up with the series' monsters and how they're similar or different from each other. If you're still cringing from the sight of the Upside Down's latest monstrosity in Season 3, let's break down what the difference between the Mind Flayer and the Demogorgon is in Stranger Things.

Being well-versed in monsters because of their love of Dungeons & Dragons, Mike (Finn Wolfhard), Dustin (Gaten Matarazzo), Lucas (Caleb McLaughlin), and Will (Noah Schnapp) have continually demonstrated a quick understanding of the Upside Down's predators. Throughout the series' first two seasons, viewers also became accustomed to the boys' use of the terms Mind Flayer and Demogorgon, but Season 3 introduced an entirely different monster to fans. Following the Mind Flayer's possession of Billy Hargrove (Dacre Montgomery), the local bully lured in victims for the monster to transform into zombie-like creatures.

These bodies eventually dissolved and merged to form a bigger, stronger monster that was separate from the Mind Flayer, or Shadow Monster, who is essentially seen as the ultimate "big bad" from the Upside Down. At one point, Jonathan (Charlie Heaton) called it a "spider thing," but other than that, no one ever assigned it a formal name and saw it as the work of the Mind Flayer.

I'm usually watching Stranger Things scenes with monsters through my fingers, so I'm sure I'm not the only fan who occasionally mixes up the Mind Flayer and the Demogorgon. After watching the kids fend off the Mind Flayer's own creation throughout Season 3, here's what to remember if you still struggle with keeping all the monsters straight.

Firstly, there's the Demogorgon. This was the monster haunting Hawkins throughout Season 1 when the gate to the Upside Down alternate dimension first opened. It snatched Will and Nancy's (Natalia Dyer) best friend Barb (Shannon Purser) from the real world and brought them to the Upside Down, where Barb was killed and Will remained captive until Hopper (David Harbour) and Joyce (Winona Ryder) found him there in the season finale.

Having had contact with this monster back in the Hawkins Lab, Eleven (Millie Bobby Brown) used her powers to destroy it at the middle school. Although he was now safe, Will coughed up a slug-like substance and envisioned the Upside Down, but he kept quiet until more mysterious signs of this darkness emerged in Season 2. Nearly a year later, Will was still having disturbing visions featuring the Upside Down's Shadow Monster / Mind Flayer, while Dustin's new pet Dart turned out to be a miniature version of the Demogorgon.

Will's hallucinations led to the revelation that the Shadow Monster was still trapped in him like a virus, controlling him to the point of Will losing his memory. Dart had also joined a pack of what the kids called Demodogs, which seemingly derive from the Demogorgon. Eleven successfully closing the gate to the Upside Down at the end of Season 2 destroyed the dogs, while Joyce overheated Will to force the Shadow Monster out of him.

But as Season 3 revealed, the Mind Flayer remained in Hawkins when Eleven closed the gate and the Russians' secret machine was ensuring the continuation of its creatures terrorizing the town. The finale's post-credit scene even implied that another kind of creature is lurking in the real world, so fans will have to wait and see if future Stranger Things address this other monster.

Season 3 of Stranger Things is currently streaming on Netflix.