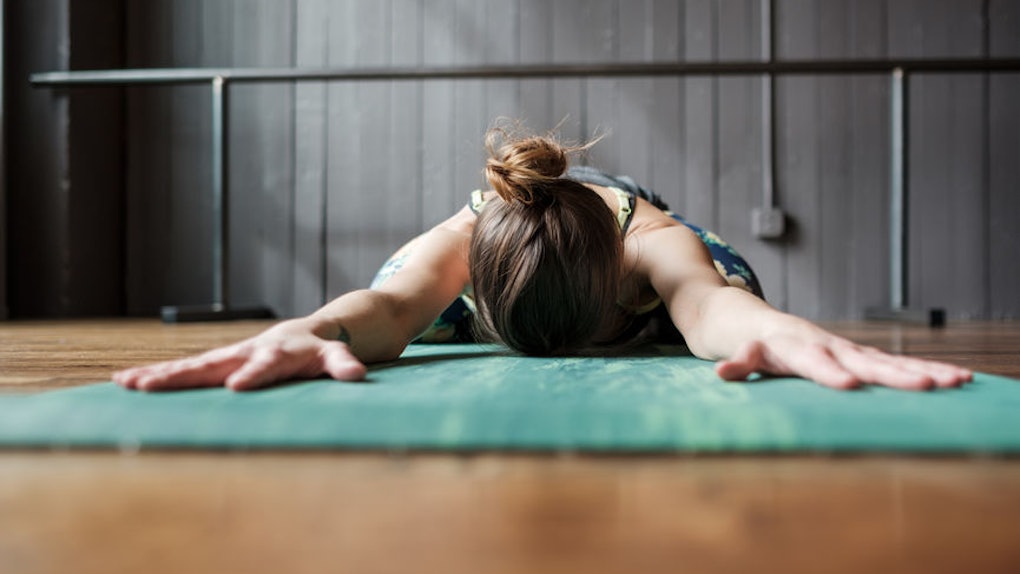 Here's How Yoga Can Help Sexual Trauma Survivors & Ease The Healing Process, According To Experts

Yoga is a comforting practice for many people. In fact, for some, yoga is so much more than just a way to unwind or get in touch with the body. Many people consider the walls of their studio a sanctuary; their practice is an outlet for release, for healing. It can be a way to work through emotional wounds, to feel safe again after experiencing something traumatic. Research from Georgetown Law's Center on Poverty and Inequality confirms this, as a 2017 report details how survivors of sexual trauma can use yoga and meditation proactively in the healing process after an assault.

And it makes sense. After experiencing sexual trauma or assault, there are two types of responses: physical and mental. According to research published in the medical journal Dialogues in Clinical Neuroscience, physically speaking, when you experience trauma, your sympathetic nervous system goes into fight-or-flight mode. This is because, in the face of any kind of threat, your sympathetic nervous system is there to alert and protect you by triggering certain responses in the body, like an increase in heart rate, blood pressure, and a rise in stress-related hormones like cortisol.

These are all relatively common responses — however, as Tatiana Forero Puerta, a registered yoga teacher and author of the book Yoga for the Wounded Heart: A Journey, Philosophy, and Practice of Healing Emotional Pain, tells me (and as the Dialogues in Clinical Neuroscience research outlines), after a person experiences a significantly traumatic event, such as sexual assault, these sympathetic nervous system responses can continue to happen long after there is no threat or danger present. This can ultimately lead to debilitating physical manifestations of anxiety and restlessness. It's basically as if your body is constantly tensed and prepared for some sort of threat, even when there is no source of danger to be found.

This type of trauma can also take an enormous toll on a sexual assault survivor's mental health. According to the Rape, Abuse, and Incest National Network (RAINN), 94 percent of women who are raped experience symptoms of post-traumatic stress disorder (PTSD) — which, as per the National Institute of Mental Health, is characterized by recurring symptoms like flashbacks, bad dreams, and frightening thoughts — within two weeks of the assault, while 30 percent of women, on average, report symptoms of PTSD within nine months of the assault. In addition to PTSD, the organization says the mental and emotional effects of sexual violence can include anxiety, depression, eating disorders, sleep disorders, and dissociation, among other health issues.

Given the fact that approximately one in six women will experience sexual violence in their lifetime, according to RAINN, healing practices like yoga are more important and necessary than ever. In fact, a 2014 study published in the Journal of Traumatic Stress demonstrated that "yoga may be an effective adjunctive treatment for PTSD," meaning it may be a helpful practice to adopt, in addition to things like therapy.

"Yoga and meditation are incredibly powerful tools to help us heal from deep [emotional] wounds," Forero Puerta, who began her own yoga practice as a way to heal from the trauma of an abusive childhood, tells Elite Daily over email. "Physically speaking, yoga and meditation are extraordinarily healing for the nervous system, and can teach survivors valuable self-regulation tools (such as body scanning and breathing techniques) that are often lost as a result of trauma."

Meditation and yoga can help survivors find balance, Forero Puerta explains, because these practices help teach both the body and the brain that it is no longer in danger, by relaxing the muscles that are on reflex to protect you.

This is why trauma informed yoga classes were created. According to the Trauma Center Trauma-Sensitive Yoga (TCTSY) program's official website, the term "trauma sensitive yoga" was first coined by David Emerson, the founder of TCTSY and co-founder of the Center for Trauma and Embodiment. In collaboration with trauma expert Dr. Bessel van der Kolk, as per the Trauma Center at the Justice Resource Institute, Emerson developed the curriculum for these yoga interventions that would later become crucial to the healing processes of so many survivors.

These classes can make a huge difference for survivors of sexual assault, as they focus on mindful movement and breathing as complementary treatments for complex trauma. Some studios offer this type of yoga, though there are also free courses that survivors can access online.

According to Dr. Sherrie Campbell, a licensed counselor, psychologist, marriage and family therapist, and author of the book, Success Equations: A Path to Living an Emotionally Wealthy Life, trauma informed yoga classes can remind the brain that it's OK to switch off its fight-or-flight response. While you may be able to accomplish similar control over your body's responses in many traditional yoga classes, what makes trauma sensitive classes different is that there's a powerful sense of choice and empowerment; as UPLIFT explains, a trauma sensitive yoga teacher typically doesn't "issue orders" for what poses you should do. Rather, the outlet says, the goal is to establish "a collaborative relationship between teacher and student."

While trauma informed yoga, in many ways, doesn't really look that different from a typical yoga class, there are a few key differences between the two, Brittany Piper, a survivor of sexual assault, national prevention and recovery speaker, and holistic healing coach, tells me in an email. For example, she explains, while an instructor will guide you through a series of poses and flows in a regular yoga class, a trauma informed yoga class usually allows students to determine what poses and movements feel safe and comfortable in their own bodies.

What these classes do involve, says Piper, is gentle, supportive language, and a sense of equality and invitation. According to Piper, these key aspects of trauma sensitive yoga give survivors the ability to reconnect with their bodies, and feel empowered and in control of not only their movement, but their decisions. "A trauma sensitive yoga teacher's sole mission is to provide a safe space for survivors to presently feel their bodies and emotions," she tells Elite Daily.

Being in this invitational and nurturing setting, Dr. Campbell explains, can activate a part of the body called the vagus nerve, which, according to Psychology Today, helps to regulate your body’s subconscious functions around rest and relaxation — functions that can often seem impossible to achieve when a survivor feels unsafe in their own body.

"[Trauma informed yoga can] connect the survivor with their body in a positive and loving way," says Dr. Campbell. "These types of exercises can give the survivor a sense of mastery over their mind and body, which they may feel they lost at the time of the sexual assault." In other words, these classes are a way to feel safe in the body once again.

According to Piper, while survivors of sexual assault can certainly attend non-trauma informed classes if that's what feels most comfortable for them, she says it may be more beneficial to be in the presence of people who really understand what it is they've gone through, and are continuing to go through.

"In my experience as a survivor, and knowing other survivors who have attended regular yoga and meditation classes, these experiences can be triggering, or worse, re-traumatizing," Piper explains. "Survivors need to feel that they have freedom to choose what is best for their body, and entering a space where you are commanded into poses not only strips you of control, but can also trigger survivors." This being said, the touching and adjustments that often go on in regular yoga classes could be triggering, and is not done in trauma informed yoga, according to Piper.

If you're based in New York City or Los Angeles, Exhale to Inhale yoga, founded by Zoë LePage, is a safe, trauma sensitive space where, according to Bustle, over 2,000 survivors of sexual trauma have experienced healing through yoga. To browse more trauma sensitive yoga classes and teachers in your area, you can use the Trauma Center Trauma Sensitive Yoga's "find a facilitator" search feature.

If a trauma informed class isn't available near you, however, or you prefer not to go to one, consider talking to your yoga teacher before class, especially if you know you'd prefer not to receive any hands-on adjustments for your poses, or if you don't feel comfortable closing your eyes during meditation. LePage's program is also a great resource for online trauma sensitive yoga classes, if you'd prefer to practice at home.

At the root of Forero Puerta's words lies the idea that, on a fundamental level, trauma sensitive yoga is a deeply intuitive, sensory experience that can help to heal both the body and the mind after going through something as serious as sexual assault. The practice is not only meant to help you feel safe, she explains, it also teaches you how to thaw the numbness you might feel after a traumatic event, so you can rediscover the beauty of self-love. "This might at first seem like a lofty idea, but in truth, these practices teach us how to land in a space of kindness and self-love," she tells me. "That is extraordinarily healing."

If you or someone you know is a victim of sexual assault, you can call the sexual assault hotline, which is free, confidential, and available 24/7, at 1-800-656-HOPE or visit RAINN for more options.