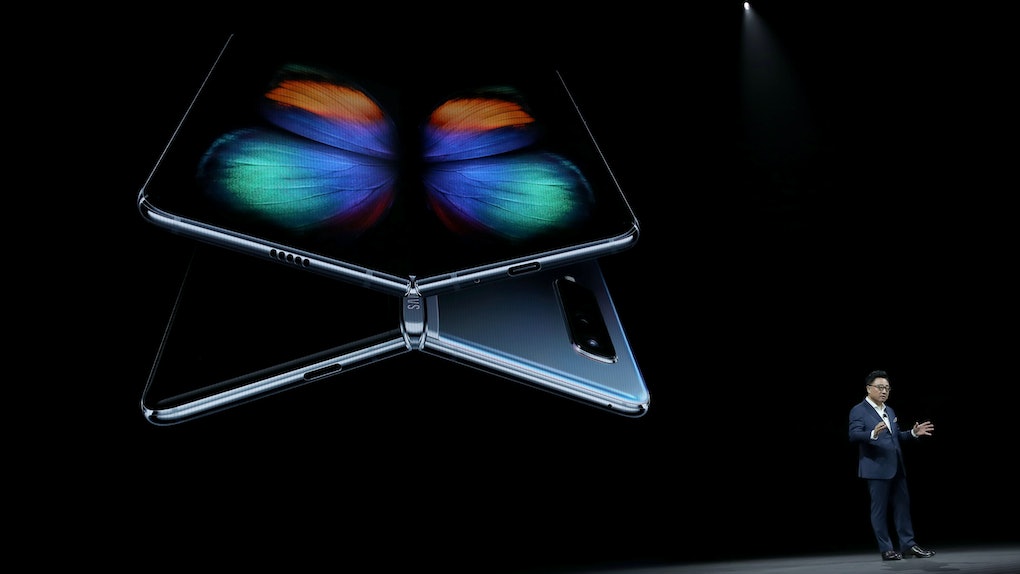 Here's How To Use The Samsung Galaxy Fold Like A Tablet, Because The Future Is Here

In case you haven't already heard, Samsung's about to change the smart phone game worldwide. On Wednesday, Feb. 20, the multinational company announced the new Android device that folds in half to become a phone and unfolds to become a full-sized tablet. The Galaxy Fold, the latest phone in Samsung's Galaxy line, will be released in late April 2019. If you're an excited Android user or a curious iPhone user, you'll definitely want to know how to use the new device to its fullest potential. Here's how to use the Samsung Galaxy Fold like a tablet so you can take advantage of all the features this unique device has to offer — in both modes.

The Galaxy Fold will launch on April 26, 2019 in the U.S. with a $1,980 starting price tag and on May 3 in Europe, priced at 2,000€. Though the price is certainly steep, customers will receive a phone with a 4.6-inch HD+ Super AMOLED display, and when folded out into a tablet, there's a 7.3-inch QXGA+ Dynamic AMOLED display, all in one device, per the Samsung website.

Using the device as a tablet is simple, since there are no additional buttons or tools users have to engage when transforming the Galaxy Fold between a phone and tablet. Simply hold both sides of the folded phone on either side of the hinge system, and open. The display will snap into place and reveal a bigger screen with even more capabilities.

Once the Galaxy Fold has been transformed into a tablet, the device has features available that aren't present in regular phone mode. In tablet mode, users can multitask on the device and run up to three apps at once, per The Verge. Unfolding the phone into a tablet also reveals a different display — folded, the Galaxy Fold has a HD+ Super AMOLED display whereas the unfolded display is QXGA+ Dynamic AMOLED.

Though there are some differences in functionality when the phone is open versus when it's closed, users can seamlessly switch between screens without worrying about their notifications disappearing. This means if you see a notification from an email app on the front screen, you can open up the device to reveal the notification within the app. The feature is called "app continuity" and is described as "intuitive," according to a Samsung Newsroom press release.

It's easy to turn the phone into a tablet because of the Galaxy Fold's complex backbone. The hinge system that allows the device to open and close is made with multiple interlocking gears that are hidden in an enclosure at the back of the device so they're not visible to users, per the Samsung release.

The Samsung Galaxy Fold also comes equipped with six (yes, six!) cameras. Per the product description, there is a cover camera, a rear triple camera, and a front dual camera, so you can snap a pic whether you have your phone folded up or opened as a tablet.

Since the Galaxy Fold won't be available for over a month yet, you have plenty of time to brush up on its versatility. Its ability to fold out into a tablet seems pretty user friendly, though, so I wouldn't be too worried about figuring it out.

More like this
Is Twitter Crop Gone? Here's What To Know About Posting Photos
By Cianna Garrison
Here's How To Go Live On TikTok To Switch Up Your Videos
By Daffany Chan
Here's How To Add Auto Captions In Instagram Stories For More Accessible Videos
By Lara Walsh
Stay up to date