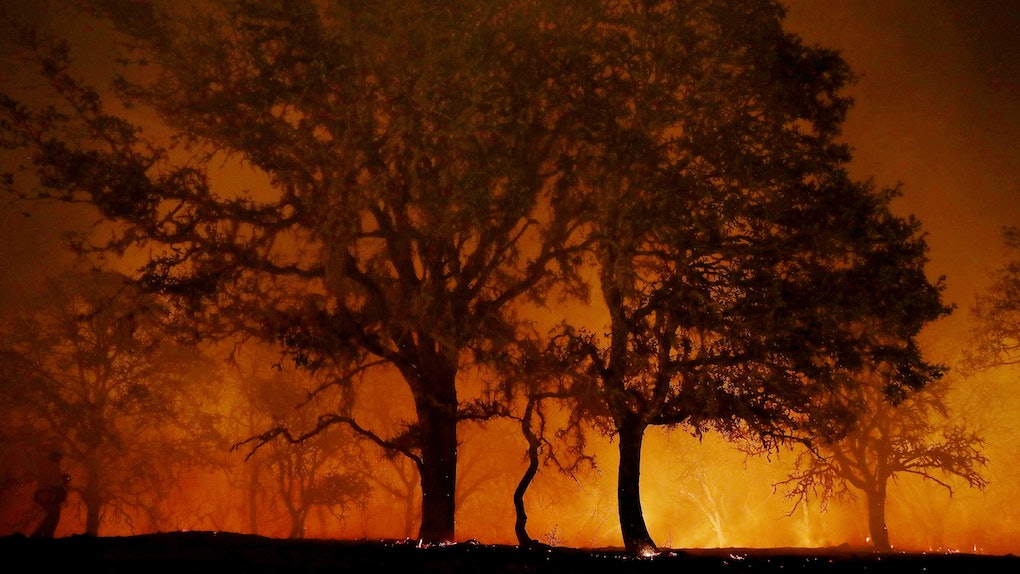 Here's How To Help Victims Of The Kincade Fire In California, Because This Is Serious

On Wednesday, Oct. 23, a devastating wildfire erupted in Sonoma County displacing residents from their homes and leading firefighters to immediately take over the area. Nearly a week later, it's still ongoing. This marks yet another fire to hit the Golden State, so here's four ways to help victims of the Kincade fire.

The wildfire, referred to as the Kincade Fire, in California's picturesque wine country Sonoma County began on Wednesday, Oct. 23, and as of Oct. 28 nearly 200,000 people have had to evacuate the area. According to The Washington Post, the fire is currently heading south towards Santa Rosa, California, and Gov. Gavin Newson of California declared a statewide emergency on Sunday, Oct. 27 as more evacuation orders were issued and the fire continued to spread across the Bay Area. As of Oct. 27, the five-day wildfire has burned over 66,000 acres of the area and the Post reports that the California Department of Forestry and Fire Protection (Cal Fire) has stated the fire is only 5% contained so far.

According to the Center for Disaster Philanthropy (CDP), since 2017 5,819 wildfires in California have burned through more than 162,693 acres of land, and per NBC News, 2018 was the state's worst fire year in history. Residents across California have been extremely impacted by the wildfires across the state, so I've compiled four ways to help victims of the Kincade fire, whether you're in the Golden State or across the country.

When it comes to on-the-ground help, a little cash can go a very long way. As a way to increase disaster relief for wildfires in California, the CDP has set up a 2019 California Wildfires Recovery Fund with the aim to "support economic recovery and ensure donation management does not detract from disaster recovery needs," according to their website. If interested, you can donate here.

However, that's not the only disaster relief fund. Non-profit organization California Fire Foundation accepts donations in order to provide assistance to firefighters, families of deceased firefighters, as well as surrounding communities.

The Kincade fire has forced people out of the area, and some into the hospital. ABC 7 News reported at least one firefighter injured in fighting the blazes, and several hospitals have been evacuated. An influx of incoming patients makes blood donations even more urgent, and American Red Cross makes it easy for anyone to search for the closest blood drive in their area. Even if you're not based in California, you never know who it could help.

Not only are Sonoma County residents's homes impacted by these fires, but animals in the area are also at risk. According to ABC 10, Sacramento Society for the Prevention of Cruelty to Animals (SPCA) took in 20 dogs and 22 cats from North Bay Animal Services and the Humane Society of Sonoma County as a result of the Kincade fire. Sacramento SPCA announced via a Facebook post that as of Monday, Oct. 28, these animals are available for adoption — but don't worry, they were available for adoption previously, so there's no issue of being separated by previous owners.

Interested in meeting your new furry best friend? Check out Sacramento SPCA's website and inquire about the adoption process.

Evacuation orders are still ongoing in the Bay Area, which has led city officials to urge residents to head to evacuation shelters in surrounding areas. However, not every individual impacted by these wildfires may have accessible transportation, so consider offering those without cars a ride to the closest shelter. On Monday, Oct. 28, San Francisco Mayor London Breed announced that Cathedral of Saint Mary of the Assumption will serve as a shelter for evacuees in the area. NBC Bay Area has posted a full list of evacuation shelters on their website, which also detail which shelters are at maximum capacity, and which allow pets inside.

More like this
Biden's Quote About Police Reform At The 2021 Address To Congress Went Way Beyond Policing
By Rhyma Castillo
How Long Are Dunkin's Coconut Refreshers Available? Here's The Deal
By Cianna Garrison
Is Twitter Crop Gone? Here's What To Know About Posting Photos
By Cianna Garrison
Stay up to date