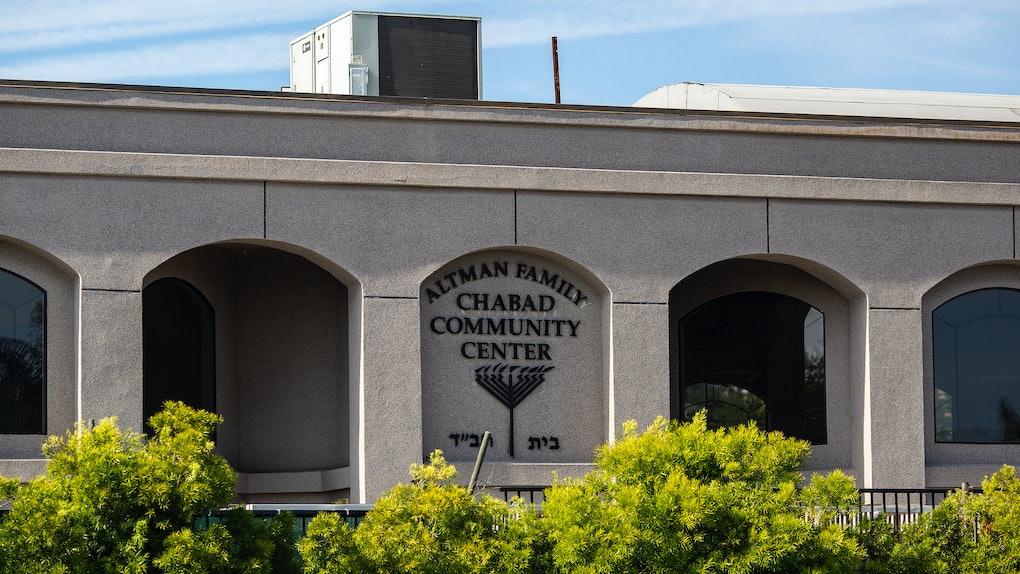 A fatal shooting at a California synagogue on Saturday, April 27, marks yet another possible hate crime at a synagogue, following the Tree of Life Synagogue shooting last October. According to reports of the April 27 attack, one person was killed and several were injured after a gunman opened fire on congregants celebrating the last day of Passover, per The New York Times. If you're looking for a way to lend a hand in this time of need, here's how to help the California synagogue shooting victims to assist in the recovery.

The shooting took place at the Chabad of Poway in California, just north of San Diego. Poway Mayor Steve Vaus described the attack as a possible hate crime "because of statements that were made when the shooter entered," per CNN. Per reports from CNN, a 60-year-old woman died in the hospital after the shooting. The New York Times also confirms the death, along with injuries inflicted on the rabbi, a 34-year-old man, and a young girl. Per the publication, the suspect was taken into custody shortly after the shooting.

President Trump offered "thoughts and prayers" shortly after news of the shooting.

If you're looking for concrete ways to help the Chabad of Poway in California, here are three things you can do to ease the recovery and care of those affected.

In the wake of the shooting, a GoFundMe was set up to assist the victims of the Poway synagogue and their families. According to the the "Help Victims of Poway San Diego Synagogue Shooting" GoFundMe, funds would be used to "pay for for any necessary medical operations for the victims, funeral services, synagogue reparations or anything else the synagogue would need assistance with."

As of Sunday, April 28, the GoFundMe is about $18,000 away from its goal of $50,000, so any donation you can make would be helpful. All money donated will go directly to the synagogue, per the page description.

2. Donate Directly To The Chabad of Poway

The synagogue website has a donate button where you can directly send funds. There are many ways you can donate and many specific causes you can donate toward. The Ben & Sue Berkowitz Memorial Fund, for example, assists children with special needs and the Martin Sheps Memorial Fund will help the synagogue renovate the Youth Game Room. Though there's no page currently set up for funds related to the shooting, your donation toward other crucial synagogue needs will help keep the community space functioning in the wake of this tragedy.

3. Donate To The Red Cross

According to the Red Cross, donated blood is essential for "surgeries, cancer treatment, chronic illnesses, and traumatic injuries." To ensure the victims of Saturday's shooting or any other future crises have the blood they need available, check out ways to donate blood at the San Diego or other Southern California chapters of the Red Cross. You can also donate money to the Red Cross Organization to go toward relief efforts in times of crisis.

If you're local to the area, you can also keep an eye out for volunteer opportunities or other community efforts that come up in the wake of this tragedy to assist victims, their families, and the congregants of the Chabad of Poway as a whole.

So, if you're looking to help the victims of Saturday's shooting, there are a few ways you can make a contribution. During times like these all efforts, no matter how small, go a long way.

More like this
This FUNBOY x Malibu Barbie Float Collection Features The Cutest Retro Designs
By Daffany Chan
Thomas' English Muffins' Cinnamon Bun Flavor Is A Sweet Breakfast Mashup
By Daffany Chan
Can You Blur Your Zoom Background On Your Phone? Here's The Deal With This Clutch Feature
By Lara Walsh
Stay up to date