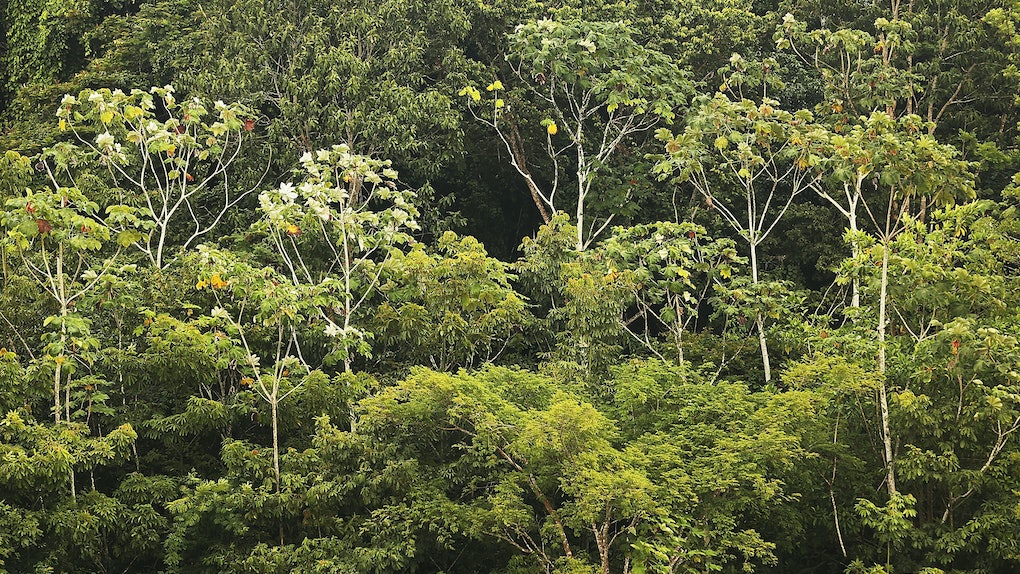 Here's How To Help The Amazon During The Devastating Wildfire

The Amazon rainforest is one of the most important ecosystems in the world, and it's in trouble. In August 2019, the forest nicknamed the "lungs of the planet" was hit by a devastating wildfire that has been destroying acres of the irreplaceable forest. This could devastate the planet, so here's how to help the Amazon during this serious wildfire. Listen up, everyone.

The Amazon rainforest consists of nearly eight million square miles, and two-thirds of the rainforest is within Brazil. However, over the past few days, Brazil's section of the Amazon rainforest has experienced one of the largest wildfires in history. The exact size of the wildfire has yet to be confirmed, but according to National Geographic, the National Aeronautics and Space Administration (NASA) stated on Aug. 11 that the wildfire had reached such extremes that it could be seen from space. Unfortunately, this isn't the first wildfire Brazil's Amazon has seen. Brazil’s National Institute for Space Research (INPE) found that that have been nearly 73,000 fires in 2019 so far, and 9,000 fires have been spotted over the past week alone. Even worse? The number of wildfires in 2019 is an 80% increase compared to last year.

Not only will the billions of animals, plants, and insects inside the Amazon rainforest feel the damage, but indigenous groups have also been impacted. Indigenous rights group Survival International estimates that 305 tribes live in Brazil today, and over 98% of indigenous reserved land is within the Amazon.

Even for those who are thousands of miles away, this wildfire impacts people across the world. So, here's a list of ways to help the Amazon during this natural disaster.

Sometimes, a little can go a long way by making a simple donation. If you want to put your dollars where they can help, you can look at organizations such as the Amazon Conservation Trust, a nonprofit that focuses on conserving and restoring the Amazon in Peru and Bolivia. Through its efforts, the group says it has protected over 4 million acres of the rainforest. According to its 2017 impact report, the organization trained 500 farmers and harvesters on sustainable conservation in the area — an important mission, given that local ranchers and farmers may use burn-and-clear methods to clear land for cultivation. In fact, that may be how the fires now got started, as some reports have suggested that the wildfires were originally lit by humans as a method of clearing.

There's also Amazon Watch, whose mission is to protect the rainforest and fight for the rights of indigenous people in the areas. It fights against deforestation in the rainforest, and partners with indigenous groups to advance their efforts. This nonprofit tracks countries — including Brazil, Colombia, Ecuador, and Peru — to see how their political actions influence the rainforest's safety. Similarly, Rainforest Foundation U.S. fights to secure land rights of indigenous people in the Amazon through advocacy and community-based conservation. It also uses on-the-ground technology to track illegal loggers and traffickers in the area. Its website features 10 ways people can help protect the rainforest, which includes a whole list of environmentally friendly products.

Of course, there are other organizations dedicated to similar causes — those are just to get you started. Lucky for us, there's a number of charities to choose from, but make sure you're donating responsibly. Make sure to check your selected charity on Charity Navigator, which allows aspiring philanthropists to see how an organization ranks out of four stars.

You might not know this, but a lot of the paper we use comes from trees located in the Amazon. So, for those who want to reduce their carbon footprint, think about reducing your waste and recycling when you can. However, even if you think your neighborhood recycles, that unfortunately isn't always the case. So, the organization How2Recycle lets users search recycling programs in their communities, so you'll be up-to-date on what is and is not accepted.

Learn About The Issue

In the long run, it can't hurt to start thinking about where the products and resources you use every day are coming from, either. According to Save the Amazon, one-fifth of the of the world's fresh water supply comes from the Amazon Basin, and the ecosystem is home to 10 million species of plants, animals, and insects. However, the rainforest has taken a huge hit over recent years, seeing as deforestation has increased since 2012. Unfortunately, deforestation is often done for human consumption in order to produce palm oil, as well as paper and wood products.

Despite the devastating impact deforestation has on the rainforest, Brazilian President Jair Bolsonaro hasn't made any serious moves to fight against it. During an Aug. 21 press conference, he dismissed reports of the serious impact of this fire. "I used to be called Captain Chainsaw," Bolsorano said. "Now I am Nero, setting the Amazon aflame."

Want to learn more about deforestation and its impact on the Amazon rainforest? Here's a rundown.

In case you've been meaning to take some time off work, or have been thinking of making a bigger difference, you could always consider volunteering on-the-ground. United Planet is an organization that features loads of volunteer opportunities across the world, and has a specific category for environmental sustainability abroad programs. Whether it's conservation trips, assisting endangered species in the wild, or even learning about environmental preservation, there's something for every interest. When it comes to helping the environment, there's no such thing as too much help.

On Aug. 22, Reuters reported that President Bolsonaro claimed that Brazilian government does not have resources to fight against the wildfires taking over the rainforest, so this situation is only going to get more dire. If you're concerned about this issue, these are just four ways to make a difference. In a disaster like this, anything helps.

More like this
The More Contagious B-117 COVID Variant Is Now The Most Common Strain In The U.S.
By Rhyma Castillo
Here's How To Make Chipotle's Dragon Sauce With 2 Simple Ingredients
By Daffany Chan
Here's How To Use TikTok's Shapeshifting Effect & Transform Into Your Celebrity Twin
By Lara Walsh
Stay up to date