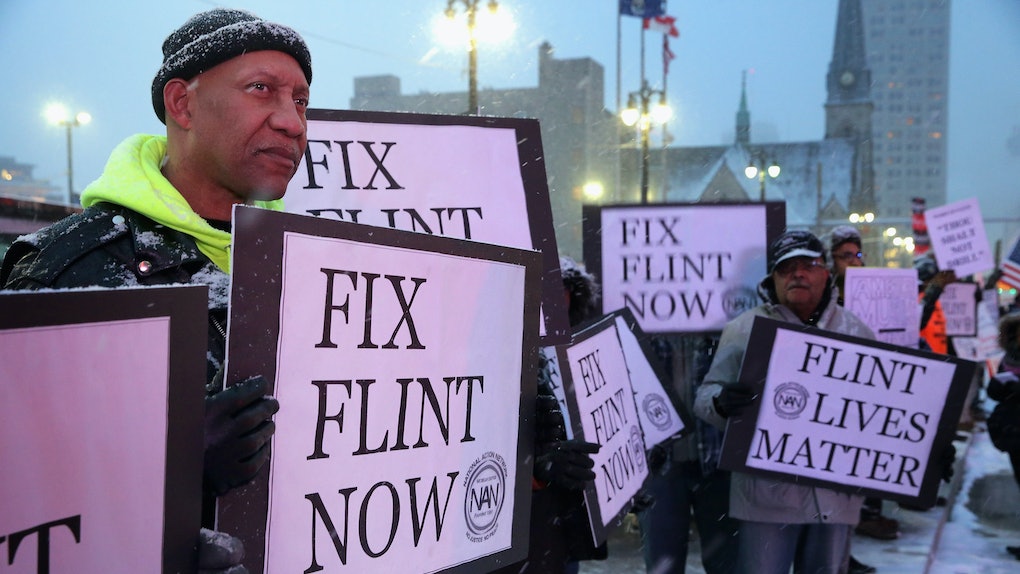 Here's How To Donate To Flint After The Notre Dame Fire, Because They Still Need Your Help Too

After the historic Notre Dame Cathedral caught fire in Paris, France on April 15, around a billion dollars worth of donations poured in to help rebuild the cultural site. Among the donors were individuals who contributed to crowdfunding efforts and wealthy families who gave million dollars to support restoration, but on April 16 the White House also pledged its support to send aid to help the reconstruction efforts. In the wake of the Trump administration's pledge for support, many people noted that the United States has been quick to promise support to Paris while Flint, Michigan still remains without clean water. Here's how to donate to Flint after the Notre Dame fire, because the American city needs your dollars.

Notre Dame's fire impacted both the architectural elements of the building and the artifacts inside. To help with restoration, billionaires, wealthy families, international corporations, French companies, and individuals donated more than €900 million (which is a little over $1 billion) as of April 19, and the White House pledged to join the support efforts. But some felt that the funds were misdirected and posed the question: What about places like Flint and Puerto Rico, which have been struggling with the ongoing effects of disasters for years? Many people called out the White House for the willingness to offer aid to Notre Dame, but not American citizens. The White House did not respond to Elite Daily's request for comment at the time.

Flint in particular has been dealing with an ongoing public health crisis for nearly five years. On December 14, 2015, Flint, Michigan declared a state of emergency due to dangerous levels of lead contamination in the city's water after a 2014 switch from the Detroit water service to the local Flint River. According to the U.S. National Library of Medicine's Center for Biotechnology Information, the toxic water in Flint is linked to brain and nervous system damage, slowed growth and development, learning and behavior problems, and hearing and speech problems in children; high blood pressure, heart disease, kidney disease, and reduced fertility in adults.

In March 2017, Flint was granted a $120 million federal and state loan to support water infrastructure projects that would lead to clean, lead-free water for residents. On April 16, one day after the Notre Dame fire, the remaining $77 million from the loan was disbursed to Flint. Rob Bincsik, Flint’s Director of Public Works, told M Live on April 16 that while the funds will help the "short and long term sustainability of the water system in the city of Flint," the water system in the city still needed over $300 million for improvements over the next 20 years.

In April 2018, the state of Michgan discontinued distribution of free water bottles to Flint, saying that the lead levels in water had not exceeded federal limits even as residents said they still did not trust their water supply, per The New York Times. As of January 2019, residents are still continuing to report discolored, odorous, or foul-tasting tap water, per local news site Bridge Magazine. Also in January, M Live reported that water testing had found the lowest lead levels since the crisis began.

Here's how you can donate to Flint to help the city build a future with safe, cleaning drinking water for all residents.

Donate To The Flint Water Fund

The United Way of Genesee County uses monetary donations to support Flint in three ways: purchase and distribute bottled water, provide filtration devices not supplied by the state of Michigan, and secure healthcare for children affected by lead. Donating through United Way guarantees that 100% of the funds will be used to reach these goals, with no administrative fees. United Way's donation page has preset contribution amounts for $10 to $500, with the option to fill in your own desired amount as well.

Donate To A Flint Cares Group

Over 120 non-profits, churches, grassroots organizations, individuals, and residents make up Flint Cares, a partnership that came out of the Flint Water Recovery Group to help residents achieve short-term and long-term solutions to the water crisis. Since Flint Cares is a network of groups working together to support residents, it doesn't directly take donations, but you can visit one of the dozens of organization pages directly to donate money or resources that will help support Flint's recovery efforts. The Flint Cares organizations do work ranging from water distribution, to advocating for disabled residents' needs, to working on policy changes for a future where all Flint residents have clean drinking water.

Donate Cases or Pallets of Water

In April 2018, Michigan announced it would discontinue distribution of free water bottles to Flint, but that doesn't mean the need is necessarily over. On the City of Flint website, the city notes that people can donate cases or pallets of water to the city via the Food Bank of Eastern Michigan, which will deliver the water to three community help centers: Greater Holy Temple, Asbury United Methodist and Bethel United Methodist. In addition to providing residents with clean bottled water, these help centers also provide free resources like lead-fighting food and produce that helps limit the absorption of lead, mental health services, water filters and replacement cartridges, and resource packets about the water crisis. The help centers support any Flint resident impacted by the crisis, and there are no eligibility criteria to receive services.

If you live in or near Flint and would like to volunteer your time to help residents access clean water, register with the Flint Red Cross to participate in water or water filter distribution events, educational events, disaster relief efforts, damage assessment efforts, or general administrative support.

Regardless of how you're able to help, Flint and other cities across the United States without clean drinking water still need support to ensure the health and safety of all residents. Your time or donations will go a long way.

More like this
Thomas' English Muffins' Cinnamon Bun Flavor Is A Sweet Breakfast Mashup
By Daffany Chan
Can You Blur Your Zoom Background On Your Phone? Here's The Deal With This Clutch Feature
By Lara Walsh
Here's How To Use The "Hey Spotify" Voice Command For The App & Listen Hands-Free
By Lara Walsh
Stay up to date