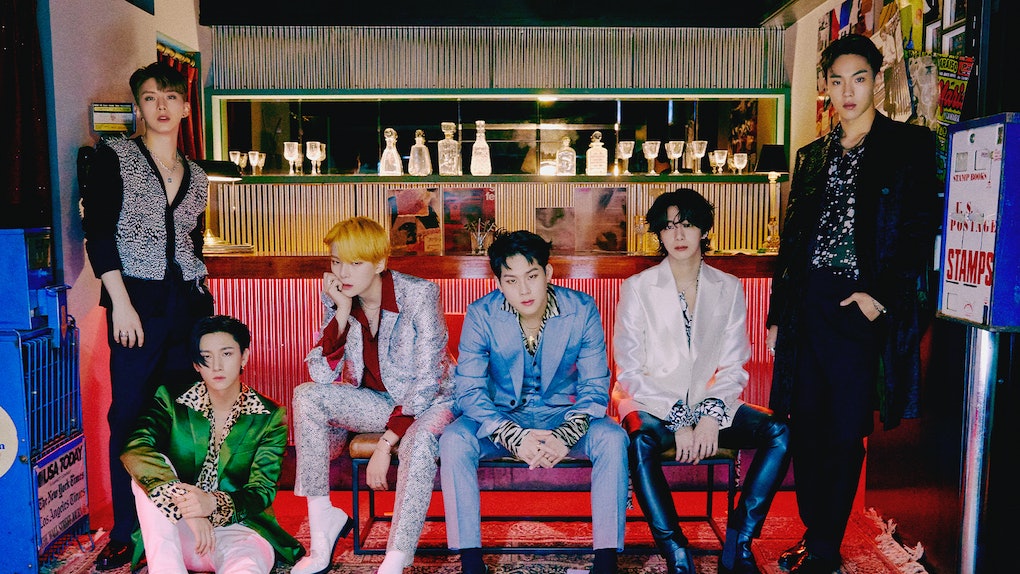 MONSTA X kicked off 2020 with a bang by dropping their first all-English album, All About Luv, on Valentine's Day. On the record, the group serenaded listeners with romantic lyrics about being "someone's someone." Now, nine months later, MONSTA X is exploring a darker side of romance, declaring themselves six cruel and beautiful "Love Killas." Since the two concepts are like opposite sides of a coin, here's how MONSTA X reinvented themselves for their Fatal Love comeback.

The group — made up of Shownu, Minhyuk, Kihyun, Hyungwon, Joohoney, and I.M. — dropped Fatal Love, along with their "Love Killa" music video, on Nov. 2. The music video is infused with blood-red hues and shows the members playing criminals looking to steal everyone's attention. It's like something straight out of an action-romance movie. Backed by a hard-hitting beat and seductive lyrics, the video sees MONSTA X experimenting with their boldest concept yet: temptation. "That's right, you look at my eyes / Straight into my eyes and just say / 'I want you eat me like a main dish' / It's hot and seems like it'll burn, hottish," the group sings.

MONSTA X was inspired to go in this new direction to show the many sides to love — and not just the ones that end with rainbows and sunshine. "Since love is the most diverse collection of emotions, we wanted to capture that diversity. Among them, we especially talked about love and hatred," MONSTA X tells Elite Daily, adding they translated this message through their mysterious, storyline-driven "Love Killa" music video. "We had fun playing the roles assigned to each person and felt so good. To show better acting, each of us did a lot of research, and we are glad that it seemed to be a good result."

As part of these "roles," Joohoney revealed he paid homage to Heath Ledger's Joker in the video. Fans also think the other members referenced characters from movies like Fight Club, American Psycho, and Silence of the Lambs.

MONSTA X says keeping things fresh for their fans is their goal. "We are constantly trying to be people who always show new sides. We've always wanted to do better," MONSTA X says. Although they've already tried many unique concepts, the group continues to push themselves creatively with every release. "We always want to challenge a new style. Everything becomes our inspiration and helps us change," I.M. adds.

The group worked harder than ever on this album by composing, producing, and writing many of their tracks, which range from genres like R&B and Latin-infused pop to hip hop and EDM. Joohoney composed "BEASTMODE" and "Stand Together," while I.M composed "Night View." Both members also took part in the writing process for seven of the 10 songs on Fatal Love.

Hyungwon had a personal achievement on the album as well: "Nobody Else" marks his first time producing and composing since his debut with the group in 2015. The singer says his decision to work behind the scenes comes from his desire to become a more well-rounded artist. "I wanted to improve my musical range while DJing, and since I know the members well, I decided to write a song because I thought I could bring out the style that the members are confident in," Hyungwon explains.

Thanks to their fans, MONSTA X is always confident trying new things. They promise fans there's more exciting things to come, teasing, "We will always work harder to become a better group, so please keep an eye on us."

More like this
Here's How To Pre-Order BTS' "Butter," Since ARMYs Want Their Biggest Comeback Yet
By Michele Mendez
BTS' Group Teaser Photo For "Butter" Is So Smooth
By Abby Monteil
Olivia Rodrigo's Quote Defending Writing Songs About Boys Calls Out Sexist Remarks
By Cianna Garrison
Stay up to date