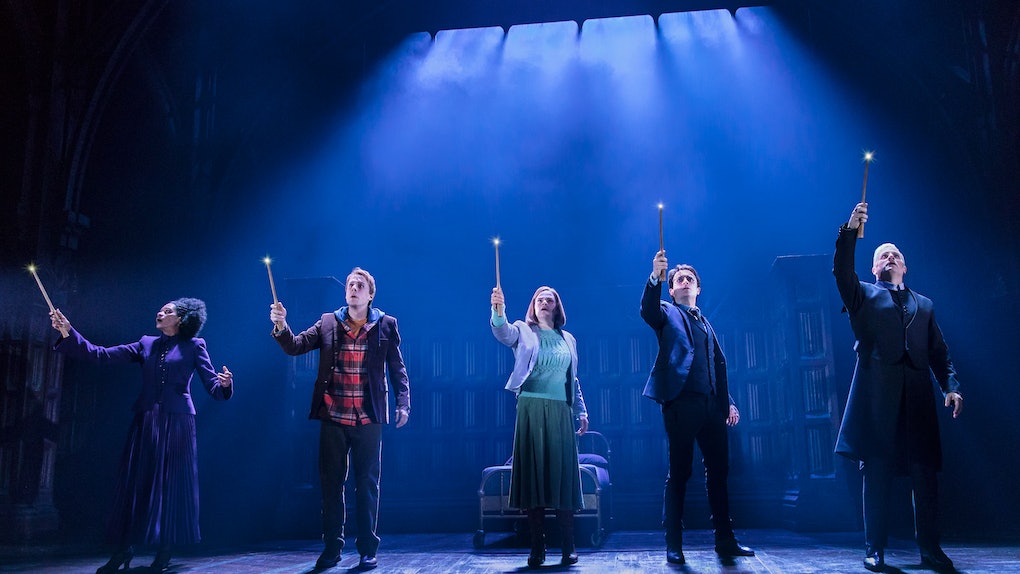 Determined to ensnare minds and bewitch senses, the cast and crew of Broadway’s Harry Potter and the Cursed Child set out to bring J.K. Rowling's Wizarding World to the stage. Through elaborate costumes, a completely transformed theater, visual illusions, and a meticulously detailed set, the Potter fandom was successfully brought back to Hogwarts nearly a decade after the final book was released. According to Cursed Child's Tony Award-winning set designer Christine Jones, recreating this world wasn't so much a difficult feat as it was a creative challenge.

Jones, who won a Tony for her work on the show in 2018, is a recipient of a 2015 Obie Award for Sustained Excellence in Design and a 2010 Tony Award for her work on American Idiot. However, the detailed design that goes into the Cursed Child production goes above and beyond any expectations of typical play; it is a two-part, five-hour experience.

Speaking to Elite Daily, Jones explains how the show's process was a completely new experience. "We had an acute awareness that we were handling material that is world-wide revered and that we needed to treat it with deep care and respect for all of the fans and the reverence that so many people have for this cannon of work," she tells me. "It was a unique challenge and unique awareness that really made it different from other projects I’ve worked on. We really had a responsibility to treat the material with great care and respect."

There are certain details of the show that the Potter fandom will recognize immediately: Platform 9 3/4, the Hogwarts stairs, Harry's cupboard. But there are others that will make fans do a double-take. The stage performance reinvented the Hogwarts house logos and wands, which was the most exciting part of the job for Jones. "We created our own design separate from the movie and the imagery that is already in existence. It was our task to create our own imagery, so we referred to the book to see how it had been described and then we got to create all our own designs for the wands and the logos. Getting to see them on stage was a once-in-a-lifetime opportunity. Like, who gets to design a Gryffindor logo or design a wand for Harry Potter? Pretty exciting."

On another exciting note, diving inside the world of Harry Potter wouldn't be complete without J.K. Rowling. "She came to a few of the rehearsals and we presented the set design with her to get her blessing along the way." Jones tells me. "She was incredibly generous throughout the process, to give all the artists her confidence in handling the material, and it was very exciting to meet her, of course."

Aside from the attention to detail in the physical set designs, Jones describes what went into creating the "magic" on stage. "We were very clear from the beginning that the movies created magic with a certain cinematic effect. It was our challenge and our opportunity to create magic with a different vocabulary, through stage-craft magic and live magic, which really sets it apart from the film," she says. The creative crew worked with magician and illusionist Jamie Harrison to bring the show's fantasy to life.

As Jones describes, "He really brings stage magic knowledge to the process. So, we got in a room and felt like we were 8 years old. We were sitting around a table brainstorming ideas and playing with cardboard and colored powder and tape — there’s a lot of tape involved in the process. It was like playing games when you were kids, just making things up and figuring out how to use your imagination and how to combine your imagination with material to make people believe in magic."

There's no question the magic of the Wizarding World is at center stage in Harry Potter and the Cursed Child. Tickets are now on sale for the show, which takes place at the Lyric Theatre in NYC.