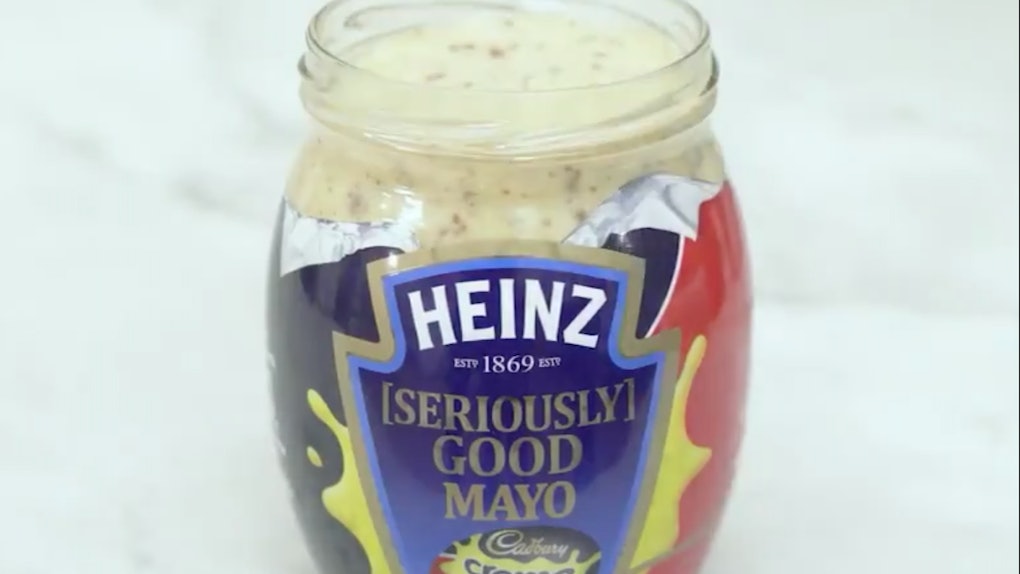 ICYMI, Heinz has been amping up its condiments game recently. TBH, I'm still processing the fact that "Kranch" and "Mayocue" are now a thing, but the brand's latest innovation might just take the cake as the weirdest additive you didn't know you wanted or needed. Brace yourself, because Heinz’s new Cadbury Creme Egg-flavored mayo now exists for a ~festive~ take on your go-to sandwich spread, and I don't know how I feel about it.

The world first learned about the existence of Cadbury Creme Egg-flavored mayo back on Monday, April 1 when the U.K. branch of Heinz Mayo took to Twitter to share that it's "a thing." Considering the timing of the Twitter announcement and the fact that making your tuna sandwich with Cadbury creme egg-infused mayonnaise is, well, completely preposterous, most people took the reveal as a gag joke for April Fools' Day.

Welp, that's until the company followed up the initial announcement with a second tweet the following day confirming that yes, a mayonnaise inspired by the flavors of Cadbury Creme Eggs now exists, and yes, you can try the unusual spread for free.

We weren’t kidding, Heinz Creme Egg Mayo is a thing! Who wants to try it? OF COURSE YOU DO! Come and see us at Ely’s Yard, Truman Brewery in London from 11th-13th April for free samples of this crazy combo. Only until stocks last!

They accompanied their message with a slo-mo video that showed someone opening a jar of the new mayo and dipping a spoon in the creamy white mixture that's speckled with tiny chocolate pieces.

TBH, it's only making me feel even more conflicted, because I can't imagine myself willfully eating spoonfuls of mayonnaise, even if the flavors of the tangy spread have been completely cloaked by the taste of a Cadbury Creme Egg. Even as a fan of the whole sweet-savory flavor combination, I have to admit that this was maybe taking things so far.

In the name of journalism, some editors at The Independent decided to try out the polarizing mixture, and their initial first impression will make you reconsider trying the new mayo.

"At first glance, the spread does not look appetising [sic] in the slightest," they wrote. "Our initial thoughts were that it looked like mustard that had gone off months ago — and was therefore the last thing we'd want to eat."

However, once they got over the whole appearance and texture thing, they said that they enjoyed the flavor and even went back for "multiple servings."

"It was almost like melted white chocolate, with a little bit of a savoury, spicy kick — almost like chili in chocolate," deputy social media editor Ben Kelly said, suggesting trying the spread with waffles or pancakes.

So, is Heinz's newest mayo flavor a monstrosity or the condiment you've been waiting for your whole life? Well, it looks like the jury is still out on that one, but it looks like anyone who's in the London area from April 11 through April 13 can sample the chocolate-infused mayo at the Ely's Yard, Truman Brewery and report back to the rest of us.