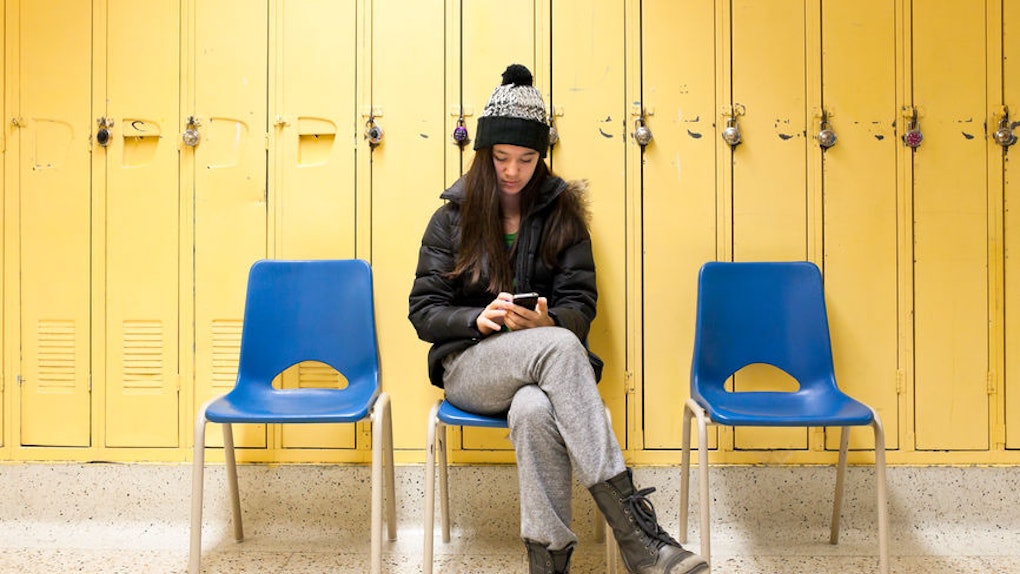 Having Phones In Class Leads To Worse Grades, Says A New Study, & It Makes A Lot Of Sense

How many times have you peeked at your phone during class, or one-handedly drafted a text or email in the pocket of your book-bag — because that’s not obvious at all (spoiler: it is). I’m willing to bet that if you own a smartphone and go to school, you’ve most likely been guilty of doing this at least once or twice. And hey, I get it — been there, done that — but just like how there’s a time and place for everything, there’s also a wrong time and place for everything, including your smartphone: Science says having phones in class could hurt your grades, so unless it’s an emergency, you’re probably better off paying attention to your teacher. Trust me, that cutie in chem you’ve been eyeing can wait a half-hour between responses, and your best friend doesn’t need to know at 10 a.m. on a Tuesday if you have plans on Friday night.

The first time I got caught texting in college was so traumatic: I was in the middle of a very heated texting argument, and even though I knew how strict my professor’s no-phones policy was, I ignored my better judgment and let my fingers have at it at my flip-phone keyboard. My professor was one of those women who was sweet, until you gave her a reason to be stern, so when I heard her say, “Julia, what are you doing?” I literally felt my throat drop into my stomach. “Put it away, please,” she said, and I swear I didn’t so much as glance at my phone in her class for the rest of the semester. Though, according to a recent study, this was probably to my benefit.

Researchers from Rutgers University found that when college students have access to their electronic devices in class, their grades tend to suffer in the long run.

I know you must be thinking having your phone with you in class is probably just an attention issue, right? Wrong, my friend. The way in which having your phone in class actually affects you is pretty fascinating, and that’s because it has nothing to do with whether or not you pay more attention, or if you’re less likely to be an active participant; it does, however, have everything to do with your grades, so you're going to want to hear this.

Basically, there’s a very real issue at hand when it comes to having phones in academic settings, and it has little to nothing to do with your attention span. For the study, which has been published in the journal Educational Psychology, researchers from Rutgers University assessed the performance of 118 students who were allowed to have their laptops, phones, and/or tablets in the classroom for half of their lectures throughout the semester, and for the other half, classes were considered tech-free. What’s fascinating is that the results showed it didn’t really matter whether or not the devices, when permitted, were actually being used: Either way, the researchers found that when students had their phones and other electronic devices in class, by the end of the semester, their marks suffered by nearly half a letter grade, or 5 percent on average. Yikes.

In other words, having your phone with you in class doesn't necessarily affect your comprehension or understanding of the lesson you're learning in real time, but these findings suggest it does affect your long-term performance in school. Professor Arnold Glass, a lead researcher on the study, said in a statement,

These findings should alert the many dedicated students and instructors that dividing attention is having an insidious effect that is impairing their exam performance and final grade.

To help manage the use of devices in the classroom, teachers should explain to students the damaging effect of distractions on retention -- not only for themselves, but for the whole class.

Science says having your phone in class isn't cutting it, so here's how you can do better sans smartphone.

In today’s world, it’s not that realistic for me to suggest that the best way to eliminate all temptation to whip out your phone in the middle of a lecture is to just leave any and all devices in your dorm or the glove compartment of your car, so what’s the alternative? On the one hand, you can shut your phone off or set it to airplane mode when class is in session, but if you prefer to use your electronic devices to take notes, then obviously you’ll need to get a bit more creative.

In a blog post for her website The Cornerstone For Teachers, Angela Watson, a board-certified teacher and founder of the Truth for Teachers podcast, said using your smartphone camera to take notes in class can be really beneficial to your learning skills. She wrote,

I use my phone camera to take pictures of product info when shopping instead of writing down model numbers and prices, to capture recipes I see in magazines, and to have access to maps and directions that I would have otherwise had to hand-copy or print out. Camera phones are one of the best and simplest tools we have today, and each year, more and more of our students have access to them. Why not harness that available technology and use it to their advantage?

So as long as you've got the OK from your professor, taking notes via camera can be a great way to use technology in the classroom. Recording your lecture could also be an option — again, depending on your professor's preference. As long as you're not eyeballing a text or scrolling through Instagram under your desk, smartphones don't have to be a death sentence for your GPA. You just have to know how to use them to your advantage.