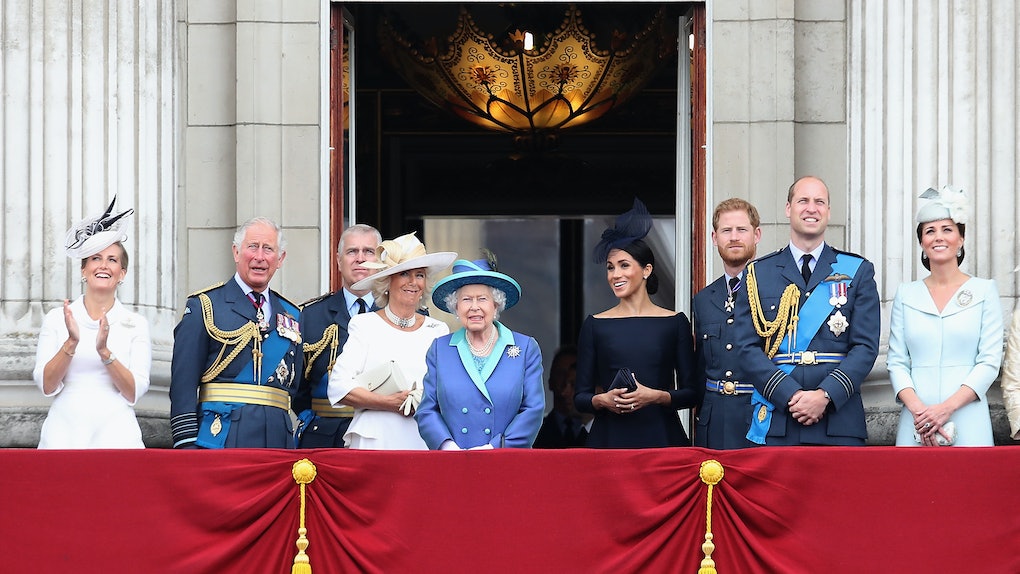 Harry, Meghan, William, & Kate's Birthday Posts For The Queen Include So Many Photos

On Sunday, April 21, the Queen of the United Kingdom celebrated her 93rd birthday. As you may have noticed, several family members, friends, and fans of the British icon have been posting tributes to her on social media in honor of her big day. And if you haven't already had the chance to see Harry, Meghan, William, and Kate's birthday posts for the queen, they include so many adorable and nostalgic photos. Seriously, I wish my birthdays could be celebrated like this.

On the morning of Easter Sunday, several important members of the royal family including Prince Harry; Kate Middleton, Duchess of Cambridge; and Prince William trekked out to Windsor Castle for Easter Sunday church services, and to celebrate the Queen's 93rd birthday, according to Harper's Bazaar. Meghan Markle was not in attendance, as her due date is coming quite soon, but each of them posted photos to the official Royal Instagram pages to honor the Queen on her special day. Some included nostalgic photos that were taken several years ago, and others were taken more recently.

First, Meghan and Harry posted a series of seven photos of the Queen, including the below portrait of the Queen to the official Sussex Instagram account. Wearing a gorgeous floral hat and blazer, the Queen was definitely rocking the look. You can tap through the post to see the other pics the Duke and Duchess of Sussex chose for the occasion.

The other six photos in the birthday wish include a sweet throwback of the Queen with her grandsons Harry and William from when they were very young; a pic of of a teenaged Harry dressed up in a suit with his grandmother; a touching photo of the Queen smiling at Harry as he stands at attention dressed in his military uniform; a photo of Meghan and the Queen sharing a laugh not long after Harry and Meghan's nuptials in May 2018; a picture of Harry and Meghan with the Queen at an official royal event; and finally another solo shot of the Queen in a light green suit and hat.

TBH, the newlyweds and expectant parents really went all out with the birthday wishes.

Also remembering the Queen's big day, the Duke and Duchess of Cambridge posted a photo to the official Kensington Palace Instagram account. It is a more recent picture that includes William and Kate holding two of their children, Prince George and Princess Charlotte, alongside the Queen and Prince Phillip. In the photograph, all of them are looking up at something in the sky. It's super cute, and it shows off three full generations of the royal fam. Take a look at it in the post, below.

The caption of the Instagram post read: "Wishing a very happy 93rd birthday to Her Majesty The Queen!" Aw!

Clearly, the royal family is going all out to honor the Queen on her big day. Turning 93 is a major milestone, and the best part of it all is that she has all these years of memorable photos to look at on her special day. My heart is seriously exploding.