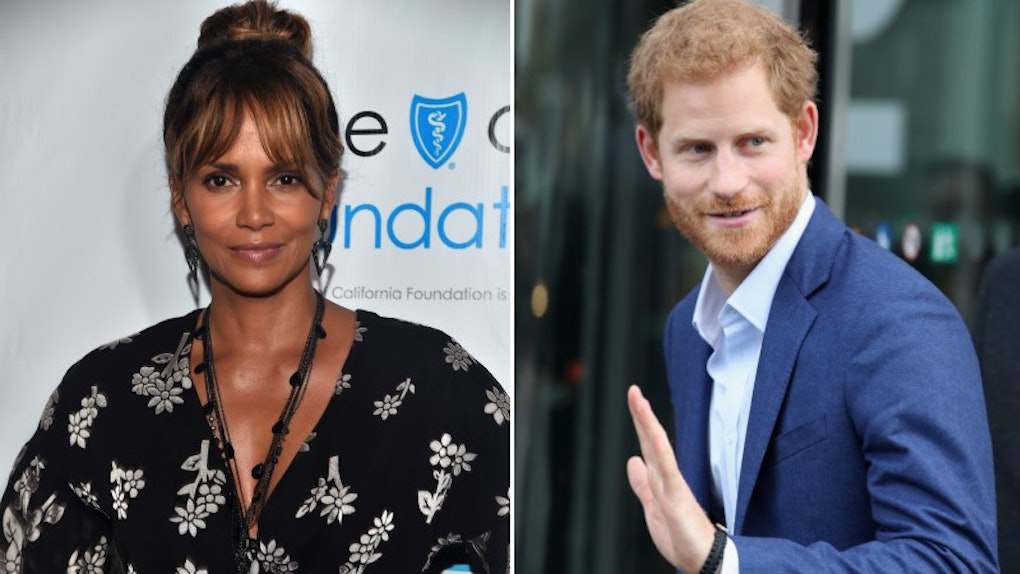 Prince Harry had a huge crush on Halle Berry when he was in prep school. And the actress is definitely amused by that revelation. InStyle magazine published photos of Harry’s prep school dorm room on Wednesday, Aug. 29, and they reveal a whole lot about the young royal at the time. He apparently had a thing for the ladies, and even had a poster of Berry on his wall. And Halle Berry’s reaction to Prince Harry’s poster of her is pretty funny.

The photos of Harry’s dorm room were taken way back in 2003 when he was likely in his senior year at Eton College, a prep school for boys in the UK. In the photos, you can see bits and pieces of Harry’s life as a teen. He dabbled in theatre (like his future wife, Meghan Markle), played sports, and clearly had a penchant for posters of scantily clad women.

Berry was among these, though she wasn’t quite as scantily clad as some others. Among the batch of photos published, the one that shows Berry’s poster in Harry’s dorm room probably reveals the most about the young royal.

Not only did he have photos of women he fancied hanging on his wall, but his desk and dresser are full of knicknacks and oddities: a gigantic boombox, random works of art, a large glass bottle of mysterious liquid (you can’t see the label), coffee and tea cups, an electric toothbrush, and so much more.

Here’s a look at the photo of young Prince Harry at Eton College:

If you look very closely, you’ll see the photo of Berry right above his head. He’s got her front and center, so clearly he had a bit of a crush on her. So sweet!

Even more sweet (or perhaps bittersweet) is that Harry has a beautiful photo of his mother, Princess Diana, right on his desk.

In any case, Berry saw the newly published image and just had to say something about it. She took to her Twitter account to let the world know she’d seen it and that she, more or less, approves of his boyhood crush on her.

It’s an interesting photo, to say the least. With Harry and Berry at the very center of the photo, that poster is a hard detail to miss. But the whole things is very cute nonetheless!

Berry’s fans thought it was cute, too. This is how some fans have been reacting to Berry’s tweet:

All the Halle Berry stuff aside, it’s interesting to get a glimpse into Harry’s life as a teen. He’s such a poised and intelligent man now that it’s hard for many people to imagine him any other way! It’s nice to know he was just a normal kid, even if he is a royal. Although he didn’t end up with the woman of his teenage dreams, he did come pretty close with his wife Meghan. Like Berry, Meghan is an actress and activist at heart. So, there's definitely some similarities there!