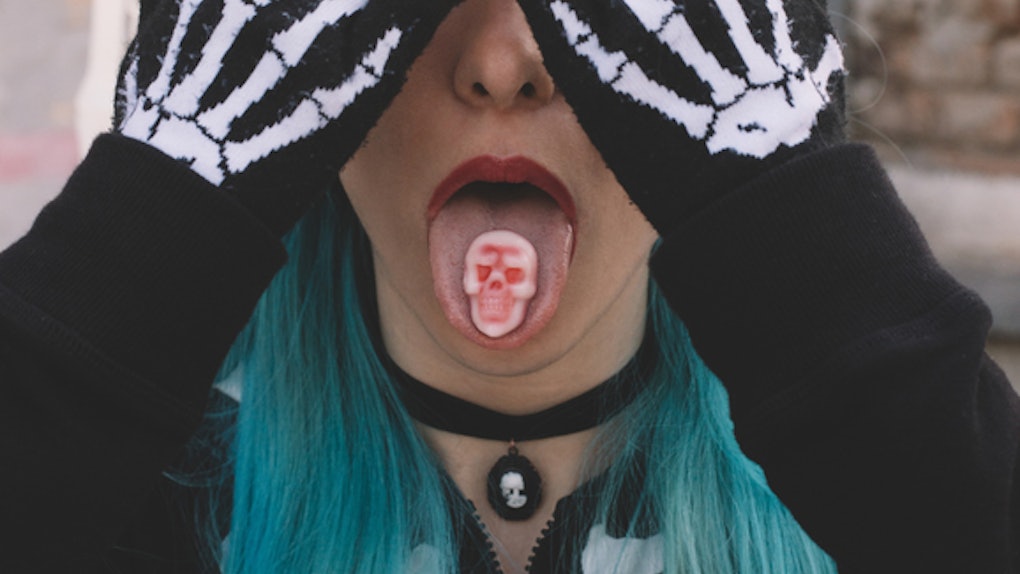 What's the creepiest, spookiest, most terrifying costume you can think of? Voldemort? A zombie? A zombie BRIDE? An evil genius? A spoooooooooooky ghost? A giant, life-sized rat? The Zodiac Killer? OK, those were all of the options I could think of off the top of my head, but you get the picture here. There are lots and lots of scary costume options out there. For me, personally, the scariest one ever would probably be a rat... or a raver. I hate both of those things. But a University of Minnesota student (majoring in biology and neuroscience) named Haleigh Conner had a Halloween costume that just may be the most terrifying costume of all.

I mean, her costume is honestly more terrifying than all of the Voldemorts, Zombies, Zombie BRIDES, evil geniuses, ghosts, zodiac killers, rats and ravers put together. What could possibly SO incredibly, bone-chillingly terrifying? Well, my friends, Haleigh dressed up as every living, breathing fan of hook-up culture's biggest fear: commitment. DUN DUN DUN.

As if dressing as everyone's worst nightmare wasn't enough, Haleigh took her costume up one notch by posting it on Instagram and tagging all of her exes in the photo, along with the clever caption, "scariest thing I could think of #shoutouttomyexes."

Check out the bold move of a costume for yourself here:

Since posting it on the internet, Haleigh's picture has gone viral, garnering over 7,000 likes on Instagram and almost 20,000 likes on Twitter. She even told BuzzFeed News that the post helped snag her exes a few extra followers. "I think a few of my exes have gained a few followers as well, which is always a plus in today's world," she said.

As is the case with most viral posts, Haleigh got a lot of attention on both ends of the spectrum. She got some diehard fans and some HATERS.

TBH, the haters don't really have any legs to stand on here. Everybody's bitter at the end of the day.

Her newfound fans definitely out number the lowly haters anyway.

She's getting a lot of love for this bold move.

And TBH, she really is a hero for giving the least amount of f*cks.

It's safe to assume this person thought Haleigh's idea was fire.

Haleigh isn't too concerned with the haters anyway. She told BuzzFeed News, "I've only been in one very serious relationship. It’s not worth it for me to look at all the comments and such, these people don’t know me or know the joke so I’m not too bothered by it!"

As for all of the jerks telling her that she has too many exes, she would like to make some things clear. As she said, she's only had one real relationship, and according to her, the rest of the names were just of casual middle school relationships. "I had boyfriends in middle school, but that usually consists of only seeing each other at school and having your parents drive you around to places," she explained. "It was never anything serious of course."

That being said, even if all 11 of those exes she tagged in the pic really were serious relationships, why in the WORLD do people care so much? Is how many people other people date really any of your business? Nope, I didn't think so. So maybe back off a bit. She's allowed to date however many people she wants and slay the Halloween costume game like a damn queen.

More like this
Heather Martin's Response To Rumors She's Dating Matt James Is Clear
By Corinne Sullivan
Kim Kardashian Asked Addison Rae If She's Hooking Up With Kourtney Kardashian
By Joyann Jeffrey
Who Is Ella Emhoff Dating? She's Reportedly Hanging Out With A 'GQ' Editor
By Corinne Sullivan
Stay up to date