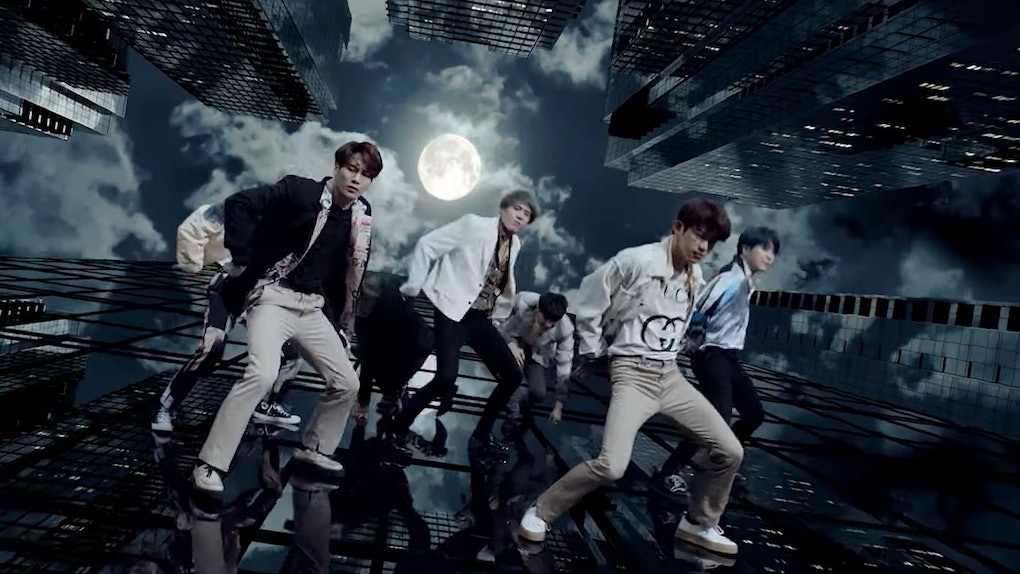 GOT7's "Eclipse" Music Video Is Out Of This World Amazing

GOT7 is one of South Korea's most popular K-Pop groups, and their comeback is officially here thanks to a new album drop and new music video! The seven-member boy band first gave their fans — that's you, Aghases! — a glimpse of the music video for their new single "Eclipse" on May 14. The sultry preview showed Mark, JB, Jackson, Jinyoung, Youngjae, BamBam, and Yugyeom gazing at the camera, then ended with an image of a solar eclipse. It was all very cool and sexy, but now we finally have GOT7's "Eclipse" music video drop in its entirety, and trust me when I tell you that you need to go watch it ASAP because it is truly a work of art.

A little background is in order first, though, dontcha think? "Eclipse" appears on GOT7's just-released album Spinning Top: Between Security & Insecurity. The mini-album features six other songs, including "Time Out" and an instrumental version of "Eclipse," which may sound like overkill but is so totally not.

The boys have been working on a bunch of solo and subunit projects over the last few months.  Jackson dropped his solo song "Oxygen," and JB and Yugyeom have their subunit Jus2, for example. It's really nice to see all seven boys performing together again in the video for "Eclipse," which dropped on Monday, May 20.

You wanna see it now, don't you? Well, here you go:

So good, right? I love when all of the boys have their solo moments. But my favorite part is when they're dancing together in the bridge of the song and everything intensifies before the last chorus. And don't even get me started on the visuals. GOT7, you guys have done it again. What a comeback.

In addition to the new album and video, GOT7 also has a 2019 Keep Spinning world tour in the works, which will kick off on June 15, 2019, in Seoul. The group will later perform five shows in the U.S. in June and July — plus one in Canada and one in Mexico City.

The band took to Twitter on May 7 to announce Keep Spinning — which is named, obviously, after their new album Spinning Top: Between Security & Insecurity.

Looks like there are 17 tour stops, with the first two being in Seoul on June 15 and 16. The seven-strong crew will then head to the U.S. for shows in Newark, New Jersey; Dallas, Texas; Los Angeles, California; and Oakland, California.

Here is a list of GOT7's North American dates and venue information for Keep Spinning:

Tickets went on sale at LiveNation on May 17, so you should probably go try and grab some now.

Welcome back, GOT7! Your fandom missed you.