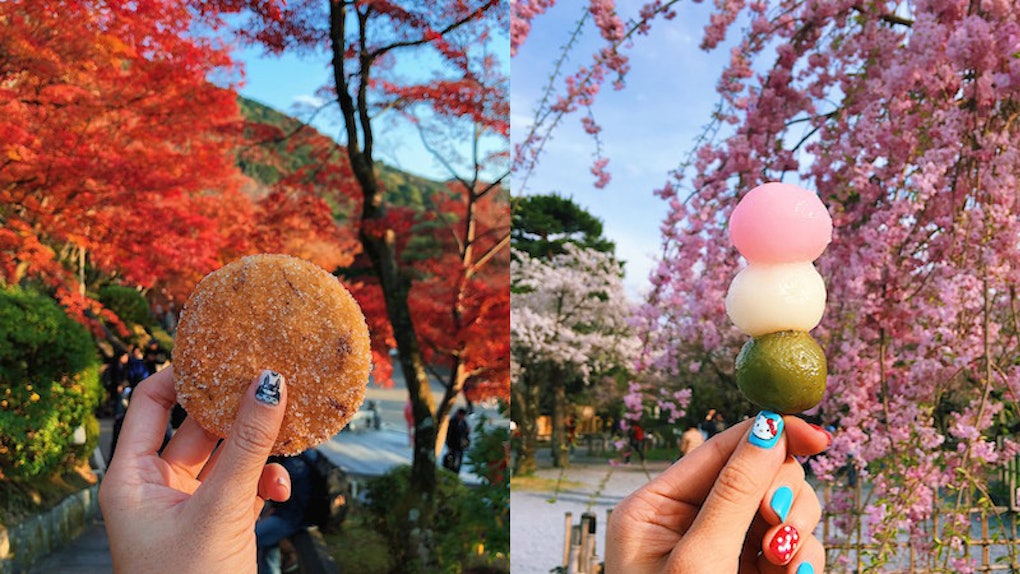 In a post-Kardashian world, every millennial thinks they have what it takes to go viral, but few consider what that online fame actually looks like in a person's daily life. In Elite Daily's new series, Life Behind The Likes, we speak with the people you know on the internet — from the people behind major Instagram accounts to the Daaaaamn Daniels of the world who went viral for one remarkable moment of their lives — to meet the people behind the screens.

Melissa Hie didn't intend to go viral when she started the @girleatworld Instagram account in 2014. In all honesty, she just didn't want to take selfies when she was traveling by herself. So instead, because she "was always eating," she snapped pictures of the food she ate, with fabulous views of her destinations in the background.

"I posted it on Facebook and everyone said that I should probably create a dedicated Instagram page for it, because they really liked it," Hie tells me in an interview for Elite Daily. "So I started doing that, and it took off from there."

I feel like on Instagram, these days, there’s a lot of pretty pictures, but they don’t tell you what’s going on behind the scenes. I don’t want to be one of those other Instagrams.

GirlEatWorld's earliest posts are from May 11, 2014, and she quickly racked up followers. "I used to lurk in Reddit, on r/travel, and I posted it there, and then I didn’t think about it. Then, the next morning, it just blew up," she says. By May 21, 2014, BuzzFeed had even covered her account.

Today, Hie has nearly 400,000 followers virtually joining her food adventures around the world. All of her photos follow the same formula: She holds a food (or drink) in front of a gorgeous backdrop. The food is typically specific to the place she's visiting, and her caption gives historical and cultural context.

Hie's account differs from many high-follower accounts as she's not a consistent poster. Days — and, sometimes weeks — will go by between posting, and then she'll post a bunch in a clump of days. This is owed to the fact that Hie really doesn't dedicate her daily life to the account.

"Not many people actually know what I look like, so I don’t feel the pressure to keep up my image or anything. It’s still a hobby for me," she explains. "Whenever I take pictures, I will, and whenever I happen to be traveling, if I find something that I like, then I’ll take a picture. But if not, well, nobody’s paying me to do it."

In this best-of-both-worlds scenario, the 33-year-old has a full-time job as a product designer at an inventory management start-up in Singapore (where, she adds, she's been "quite spoiled" with how good the food is). Hie, who is Indonesian, spent 10 years living in Los Angeles for school before moving to Singapore after college. Her colleagues know about the account and will often lovingly tease her about it, "like, ‘Ooh, what’s GirlEatWorld gonna do next? Did she eat all the cake in the pantry?’" she says.

Hie did tell some friends about the account when she made it, and it's a point of conversation when she makes new friends. "But as they get to know me more, it’s not really a huge part of my day-to-day life. It’s only part of my life when I’m traveling. So I think the novelty wears off," she says.

Although the account isn't her full-time job, it does get her offers from companies to go on trips. "I only take it if they don’t have too many expectations or restrictions on what I should post, so it’s still a vacation for me," Hie says.

I hope people will be more inspired to travel and be more open-minded to try more local food and just be more adventurous.

She has always loved traveling, and she believes that eating the authentic, cultural food of a place is "the best way to experience a country." That's why her posts always focus on local foods — and, often, the captions explain what she's eating.

"It’s always been about authentic food from wherever I go, like sushi in Japan, or a Hello Kitty donut in Japan, just because Hello Kitty is so famous from Japan. It’s kind of like food that has a story about the place as well, so I can tell more interesting trivia along with the image," Hie says. "I feel like on Instagram, these days, there’s a lot of pretty pictures, but they don’t tell you what’s going on behind the scenes. I don’t want to be one of those other Instagrams.”

Hie loves to ask locals for food recommendations, whether that's on-the-spot, through the Instagram account, or with other famous Instagrammers who live where she's traveling. She says that some places — like Japan — are super easy to make the posts from as they're filled with obvious aesthetically pleasing foods and backdrops. In some places, though, she has to do her research and plan it out. But on average, from taking the photo to posting, it's about a 10-minute process, which includes writing the caption.

And yes, she says, she eats everything she Instas. "I don’t waste food! Basically everything that I take pictures of I actually eat. Sometimes I share it with my travel companions, but it’s mostly for me," Hie laughs. (And, no, her daily meals are not all as Insta-worthy.) Although it's hard to narrow it down, her favorite new food was pho she had in Vietnam "just on the side of the street."

"That’s actually what people eat on the street, so I took a picture of that," she says. "It was just so good."

When it comes to picking where to go next, Hie consults her bucket list — and, of course, her work schedule and bank account — to figure out what's feasible. The biggest point on her list that she hasn't been able to get to is South America, which is hard to reach from Singapore because it's so far away. "So maybe next year, but I don’t know. I keep saying this! I keep saying I’ll do it, and then something else comes up!" she says through a sigh.

Although Hie runs the account just for fun, she does hope it has an impact. "I hope people will be more inspired to travel and be more open-minded to try more local food and just be more adventurous," she says.

"I traveled when I was younger and didn’t have too much money. For me, the biggest advice is just do it," Hie says. "These days, it’s pretty easy to travel with whatever budget you have, so you can do a low-cost carrier and then there are hostels and couch-surfing. It’s just narrowing down what you want to do and what you want to get out of the travel."

And sometimes, what you get is a delicious meal, new cultural insights, and a couple hundred thousand followers on Instagram.