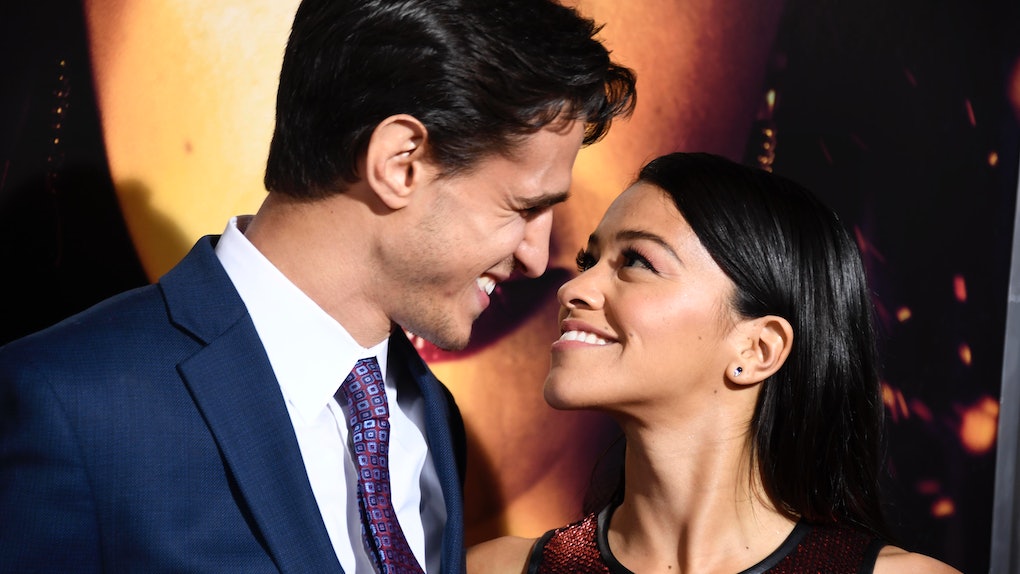 Gina Rodriguez Officially Married Joe LoCicero & I’m A Mess, It Was So Perfect

Hi, hello! Big news today: Gina Rodriguez got married on Saturday, May 4! Yes, while the rest of the world was out brunching, celebrating Cinco de Mayo, and preparing for Game Of Thrones, Rodriguez tied the knot. The Jane The Virgin star shared the happy news with fans and followers on Instagram on Monday, May 6, and the world will never be the same. Gina Rodriguez officially married Joe LoCicero, and the wedding looked positively stunning. I mean, let's get real: Rodriguez is a baller, so are we really surprised?

Rodriguez shared a snippet of her wedding video to her Instagram account, which you should definitely check out here because it's all kinds of adorable and total wedding goals. "With that one kiss we got 100 new family members" Rodriguez began the post, quoting her 9-year-old niece, Mia.

The actress then went on to thank all the people who helped her big day come together. "Thank you to my mother in law for the wedding of my dreams," she wrote. "And the village that helped her!" But that's not even the best part. Get ready, Jane The Virgin fans, because you won't believe who officiated their ceremony.

It was Justin Baldoni, Rodiguez's co-star on Jane The Virgin and one of her character's love interests, who she described as her "soul brother" in her wedding video post. I'm not crying, you're crying! The video also featured a glowing Rodriguez walking down the aisle (wearing a satin mermaid gown by Spanish brand Pronovias), total gut-punching shots of LoCicero crying as he watched Rodriguez walk down the aisle, the couple dancing together, and basically just having the time of their lives. All in all, it's an amazing video, and it looked like a truly gorgeous wedding. "May 4th, 2019 was absolute MAGIC," Rodriguez said at the end of her caption. "To my husband Joseph, I am yours forever."

Ugh, it's OK if you need a minute to wipe your tears. Between the video and her caption, Rodriguez is really coming for our heartstrings this morning. The actress and her now-husband LoCicero have been together since around August 2016, and have an amazing love story. The two met on the set of Jane The Virgin, when LoCicero guest-starred in an episode where he played a stripper hired for Jane's bachelorette party. To be honest, it's a pretty incredible way to meet your future spouse, and one that the two will likely never forget.

In August 2018, Rodriguez confirmed to PEOPLE that she was engaged with the sweetest statement. "I am [engaged]!" she told the magazine. "He’s the best. He’s the f*cking best. We’ve been engaged for like a month — I’ve kept it a secret for a while."

And now, the two have tied the knot in an epic ceremony. Rodriguez and LoCicero are clearly meant-to-be, and they both looked so incredibly happy on their wedding day. Really, what more could anyone ask for? Congratulations are definitely in order for the happy couple. Here's hoping they share a lifetime of bliss together!