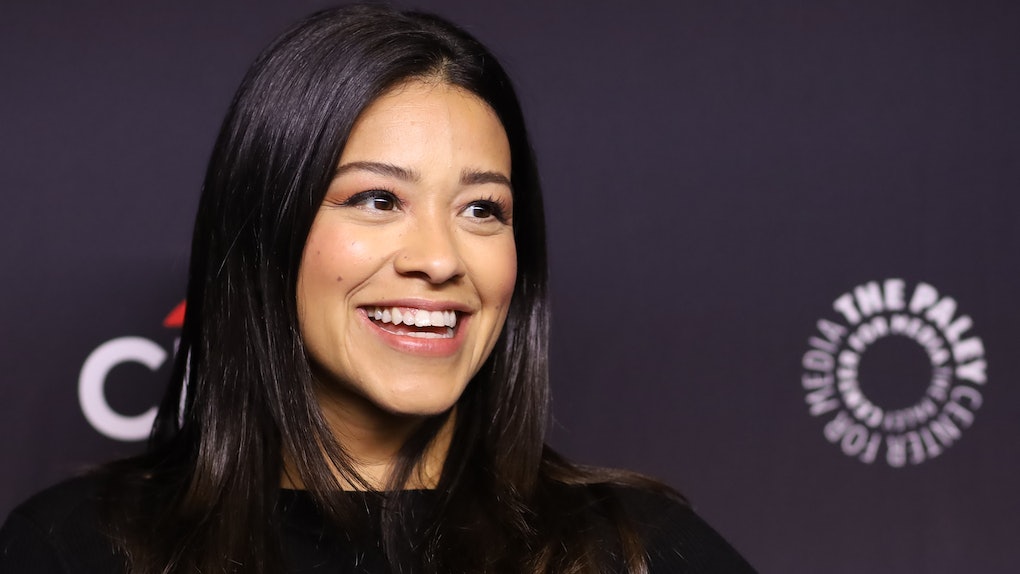 She may be one of the queens of The CW, but Gina Rodriguez is taking on a more presidential role when her hit series Jane the Virgin ends later this summer. Following its November 2019 launch, Disney+ will release a series detailing a slightly awkward tween girl's path to her eventual job as president of the United States, and Rodriguez's work in it may just serve as the perfect antidote for saying goodbye to Jane Villanueva. Gina Rodriguez is starring in Diary of a Female President on Disney+ as POTUS, and this is one alternative reality I can definitely support.

While the Disney+ streaming service debuts on November 12, Diary of a Female President is slated for a 2020 release (perhaps in time for the peak of the 2020 presidential campaign?). Rodriguez will star as the older version of Elena (newcomer Tess Romero), a 12-year-old Cuban-American girl who captures her middle school experience in diary entries. Young Elena, described as "unabashed, semi-dweeby, ultra-observant," will parallel Rodriguez's recurring role as the older version of the character who is pursuing the presidential office.

After making her directorial debut with a 2018 episode of Jane the Virgin, Rodriguez will also direct Diary of a Female President's first episode and executive-produce the series. In addition to her and Romero, the 10-episode project stars Charlie Bushnell as Elena's brother Bobby, Selenis Leyva (Orange Is the New Black) as their mother Gabi, and Michael Weaver as a lawyer at Gabi's firm who has just started a relationship with her.

Parting ways with Jane the Virgin's beloved Villanueva family is inevitable, but Rodriguez gave fans a peek into her new TV family through an Instagram photo of herself with Leyva and actor Jessica Maria Garcia (On My Block). The women pose around a seat with the Diary of a Female President logo printed on it. "And I’m writing it all down in my Diary," Rodriguez wrote alongside the pic.

As series production begins, Rodriguez has a team of women behind the scenes, too. She and producing partner Emily Gipson, the forces behind I Can and I Will Productions, are working on the series along with showrunner Robin Shorr. Series creator Ilana Peña will also write all episodes, adding to TV's notable history of fictional female presidents.

"I established my production company as a vehicle to tell stories for and by the underrepresented,” Rodriguez said in a statement. “Bringing this story to Disney+ is a dream come true not to mention hope for our future."

Rodriguez's company previously signed a deal with CBS TV Studio and marked its first major endeavor with the Young Women's Honors platform. Rodriguez is also set to produce and star in a live-action film adaptation of Carmen Sandiego and was tied to a potential Jane the Virgin spinoff as a narrator before The CW axed the series. It is a little bittersweet that any chance of more Jane seems implausible, but here's to Rodriguez leading a group of women into a presidential future.

The Disney+ streaming service launches on Tuesday, Nov. 12. Diary of a Female President will debut on the service in 2020.