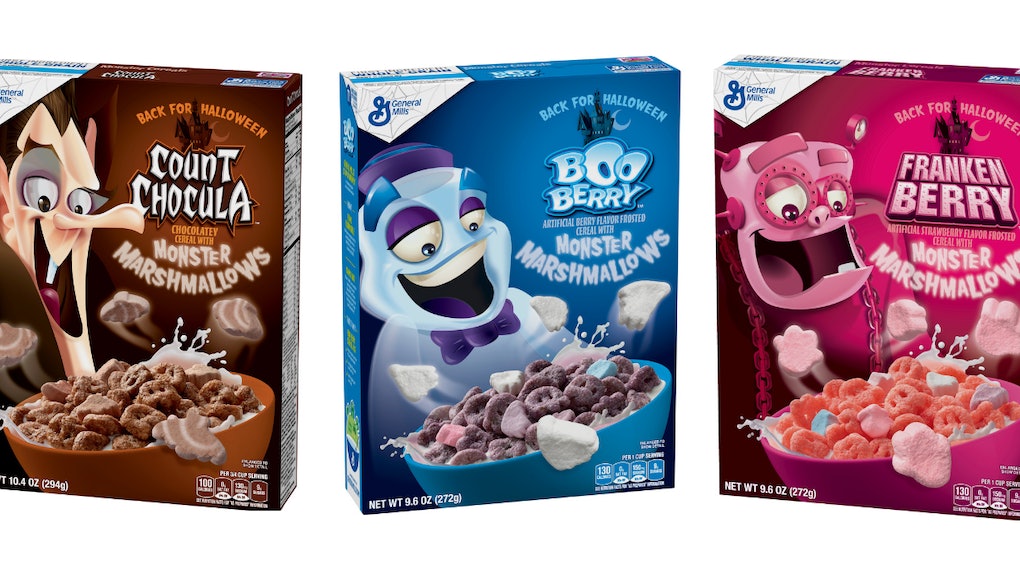 The countdown to Halloween is on. Or at least I'm counting down to it, anyway. It's one of my favorite times of the year. One of the things I'm doing to get in the spirit for the Oct. 31 event is drinking an outlandish number of PSLs, covering my front porch in pumpkins, and chowing down on boxes of General Mills' Monster Cereals. There are three different frightful flavors that will delight your taste buds, and each box has arrived just in time for a spooky Halloween treat.

Stroll into any grocery store where General Mills products are sold and you'll find three different varieties of Monster Cereals. First up? My favorite of the three: Count Chocula. With a name like that, how could you go wrong? If you didn't guess, Count Chocula is a chocolate cereal that also has pieces of chocolate monster marshmallows. It's basically a chocolate lovers dream come true. I like to let my cereal sit in milk for a few minutes so that the milk takes on the chocolate flavor from the cereal. It's basically chocolate cereal with chocolate milk, and it's divine.

Next up is General Mills' Boo Berry Monster Cereal. This Halloween-inspired breakfast treat features a ghostly ghoul on the front of the box. What's inside the box? There are pieces of berry-flavored cereal bits, as well as pink, white, and blue monster marshmallows in the shapes of ghosts. Pour this into a bowl and try not to get spooked. I dare ya. Both the Count Chocula and Boo Berry Monster Cereals have been available for since 1971, so you know they must be good.

Last, but certainly not least, is General Mills' Franken Berry Monster Cereal. This one is a spooky mix of strawberry-flavored cereal bites that are frosted with a sweet coating. Like it's two counterparts, the Franken Berry cereal also features monster marshmallows. This spooktacular bowl of breakfast goodness is sure to keep you on your toes this October. According to General Mills, Franken Berry made its debut in 1973 and it hasn't been scared away — yet.

All three of these Monster Cereal flavors are available for purchase throughout the month of October. General Mills decided to make Franken Berry, Count Chocula, and Boo Berry seasonal offerings back in 2010, so these frightful flavors won't be around for much longer. Like I mentioned above, you can find these spooky breakfast treats at major retailers across the country. For example, stores such as Target, according to General Mills.

So, what will a box of this Halloween goodness cost you? I'm happy to report a box of General Mills' Monster Cereal won't make your bank account vanish in the blink of an eye. According to General Mills, Monster Cereals will cost roughly $2.50 for a mid-size box and $3.99 for a family-size box.

I suggest you swing by your local grocery store and grab a box of your favorite flavor, or one of each, before it's too late. If you don't act now, you'll be stuck waiting until next Halloween to enjoy these spooky snacks.