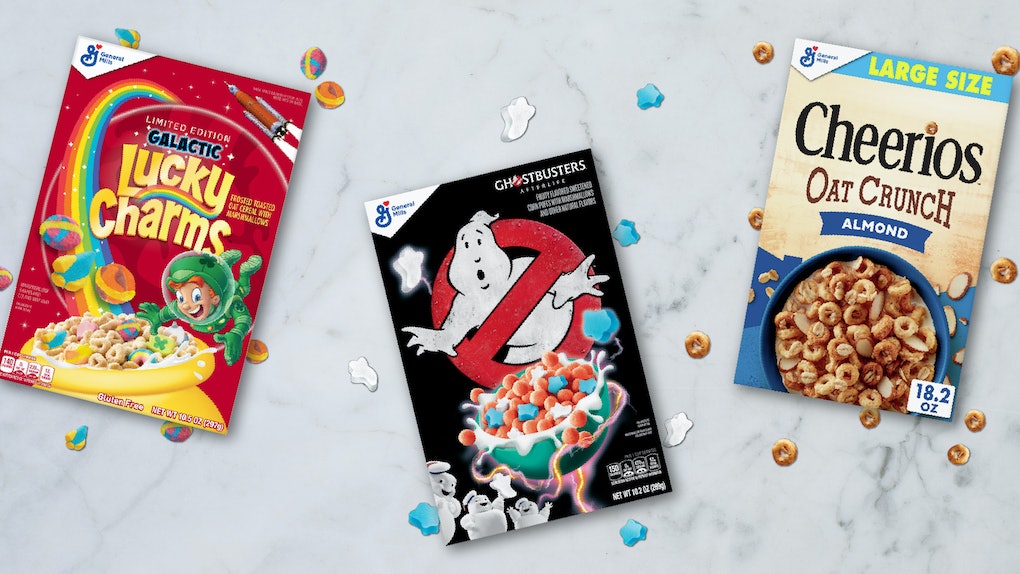 There's a new breakfast bite that'll have you throwing it back to an iconic '80s film. Generals Mills dropped a new cereal inspired by the upcoming Ghostbusters sequel, and it's a nostalgic treat filled with adorable ghost shapes. Since General Mills' Ghostbusters cereal is only here for a limited time, you'll definitely want to stock up soon for your next movie marathon.

The new cereal is in honor of the upcoming movie sequel, Ghostbusters: Afterlife, which is set to hit theaters in November. The new movie will follow up the 1984 classic and its 1989 sequel by bringing back the iconic cast along with introducing new ghost hunters. To celebrate the revival, General Mills is releasing a new cereal that gets inspo from the movie and is just as tasty as it is spooky. Featuring the classic Ghostbusters logo on the box, the bite is a combo of fruity, sweetened corn puffs and blue and white marshmallows shaped like the cutest ghosts and ectoplasms. Since the marshmallows taste just like Lucky Charms marshmallows, you can expect the same sweetness you know and love with each mouthful.

Along with the new Ghostbusters cereal, General Mills also dropped another limited offering: Lucky Charms Galactic. It's an out-of-this-world spin on classic Lucky Charms, featuring eight OG marshmallow charms as well as three new shapes: a rocket and two different planets. You'll want to prepare to take off into space with each bite of the galactic cereal, which costs $4.99 for a family-size and $3.99 for a regular.

If you're looking for a breakfast bite you can enjoy all year long, General Mills has three new permanent cereal additions: the Dulce de Leche Toast Crunch, Cheerios Oat Crunch, and the Almond and Apple Cinnamon Chex, which was released in partnership with Chrissy Teigen. When you head to the grocery store to pick up some cereal, remember to keep in mind the most updated CDC guidelines on mask-wearing and running errands.