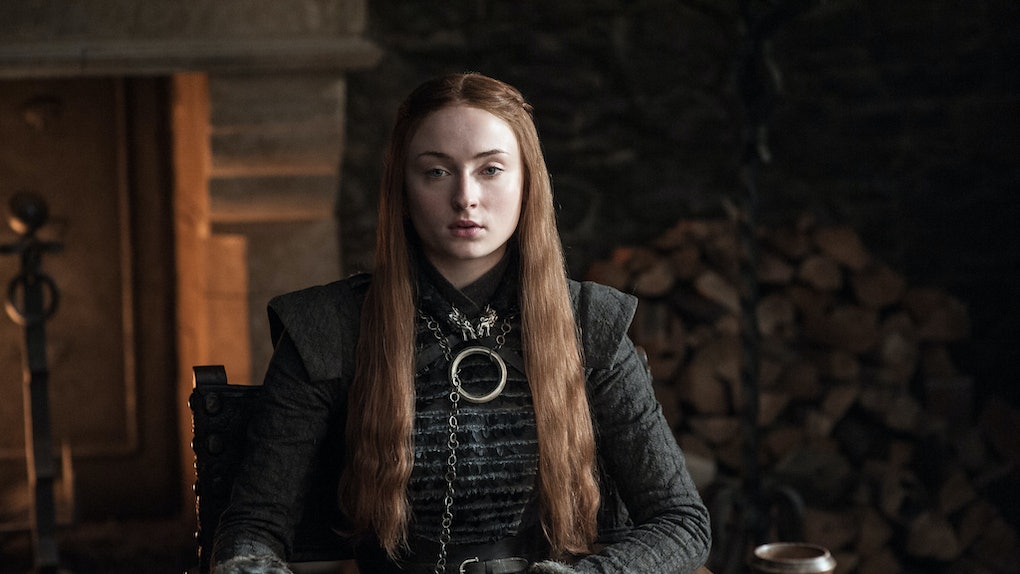 With filming on Game of Thrones Season 8 complete, and the Emmy campaign for Game of Thrones Season 7 underway, fans can look forward to plenty of cast interviews over the next two months. Chances are there won't be significant spoilers forthcoming for the final season, but there will be plenty of hinting. When Digital Spy sat down with Sophie Turner to talk about the upcoming season, there were mini-Game Of Thrones Season 8 Sansa spoilers, especially about what fans can expect to see from the Lady of Winterfell.

As viewers have most likely put together, the reveal Jon Snow is really Aegon Targaryen is going to change the dynamics of power in the North. Jon will still be a Stark, and a legitimate one. But he'll also have a claim to the Iron Throne, which would leave the North in need of a Warden loyal to him. Sansa Stark is the obvious leading candidate for that job.

Speaking to Digital Spy, Turner said this is Sansa's time.

She's a real, true leader of Winterfell now. And that's where we first see her – as a very protective, empowered lady in charge. It's the first time you ever see her like that, and it's so amazing to see her like that – kind of owning her destiny.

According to Turner, Sansa has put all the pieces together, from all her teachers across the years, and made herself into the leader the North needs.

She's used Littlefinger for all he has. As she said, 'Thank you for all your lessons'. He has nothing left to give her. So she is so empowered. She has a family behind her. She has Littlefinger, Cersei, Margaery, everyone's wisdom and teachings all behind her.

In Turner's view, Sansa has been the role of a lifetime, even if the Emmys have failed to nominate her for an award for it yet. Over the course of eight seasons, Sansa Stark has made a 180-degree turn in who she was to who she is today.

I've been so, so lucky [because] it's the biggest acting part I think I could have ever had. To be able to take her through the motions of being beaten down, and growing and eventually evolving – literally season by season, you see a huge change in her. And now we've got to the point where she's this steely, strong, manipulative, intelligent, kind, young woman, and it's completely the opposite of who she was at the beginning of the series.

Turner notes Sansa has her family behind her. This suggests not just Arya and Bran, but Jon as well. He has, from the beginning, wanted Winterfell to be hers. He took the role of King in the North because he couldn't see a way out of it.

Now he has one, though unfortunately, it's bringing him more responsibility than less. From the sounds of what Turner is saying, when Jon picks up the mantle of Lord of the Seven Kingdoms, it will be her to whom he turns to rule the North. Fans just hope she lives to do so.

Game of Thrones will return to HBO whenever it feels ready in 2019.

More like this
'House Of The Dragon': 'GOT' Spinoff Cast, Release Date, Filming News, & More
By Ani Bundel
When Will 'Riverdale' Season 5 Return In 2021? Its Mid-Season Break Is Long AF
By Rachel Varina
Juliette Porter Teases 'Siesta Key' Season 4 Drama — EXCLUSIVE
By Rachel Varina
Stay up to date