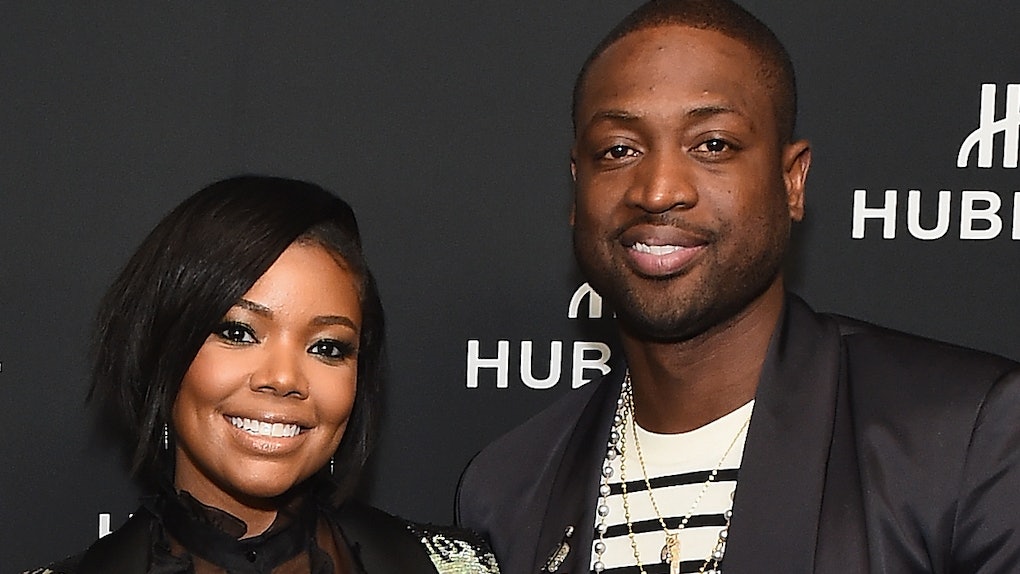 It's Friday, and I'm in the mood for some feel-good, positive vibes. And what better way to send some good energy out in the universe than seeing some pictures of an adorable baby? (There is no better way.) And luckily for us, actress Gabrielle Union has a 4-month-old little lady that will fill your heart with pure joy. That's right, you guys. Gabrielle Union's photo of Kaavia Union-Wade dressed in all red will make you want to squeal with delight, because it's just that cute.

Back in November of 2018, it was announced that Gabrielle Union and Dwyane Wade welcomed their daughter via surrogate, after Union revealed that she and Wade struggled to conceive naturally for several years, candidly opening up about suffering over eight miscarriages.

But then Kaavia came along, clearly making Union one happy mama.

For her daughter's 4-month birthday (is it called a birthday if it hasn't been a full year?), Union took to Instagram to show her fans little Kaavia dressed up head-to-toe in red. We're talking a red head wrap, a red shirt and skirt with tiny red booties, and let me tell you, she's already a fashionista.

"Red Swan turns 4 months 👼🏾 @kaaviajames is growing sooooo fast!!" Union captioned the photo, and you honestly can't tell me there's a more perfect picture that exists on the internet:

If you feel as though you want to see more of the Union-Wade family, then you'll be happy to know that Kaavia has her very own Instagram account, where mom and dad post pictures on the regular.

In fact, Kaavia has a similar red dress photo on her own Instagram account, but instead of being all smiles, there's a series of photos where she's wearing rose-tinted heart-shaped sunglasses, throwing subtle shade at the camera. The caption read,

Day party in LA. Cute casual they said. I live for a stunt as you can see.#shadybaby 4month turnup #bottleservice

This is such a mood.

Whether her baby is offering up a handful of sass or not, it seems as though Union is over the moon about motherhood. She detailed her journey with infertility in her 2017 memoir, We’re Going to Need More Wine. "For three years, my body has been a prisoner of trying to get pregnant — I’ve either been about to go into an IVF cycle, in the middle of an IVF cycle or coming out of an IVF cycle," Union wrote.

Fortunately, she and Wade were able to have Kaavia via surrogate, and on Nov. 8, made the incredible announcement on Instagram. In her caption, she wrote the lyrics to "Lovely Day" by Bill Withers and added,

A LOVELY DAY 👶🏾👶🏾👶🏾 We are sleepless and delirious but so excited to share that our miracle baby arrived last night via surrogate and 11/7 will forever be etched in our hearts as the most loveliest of all the lovely days. Welcome to the party sweet girl! #onelastdance#skintoskin

Keep the Kaavia content coming, Gabrielle! Your fans are just as in love with her as you are.