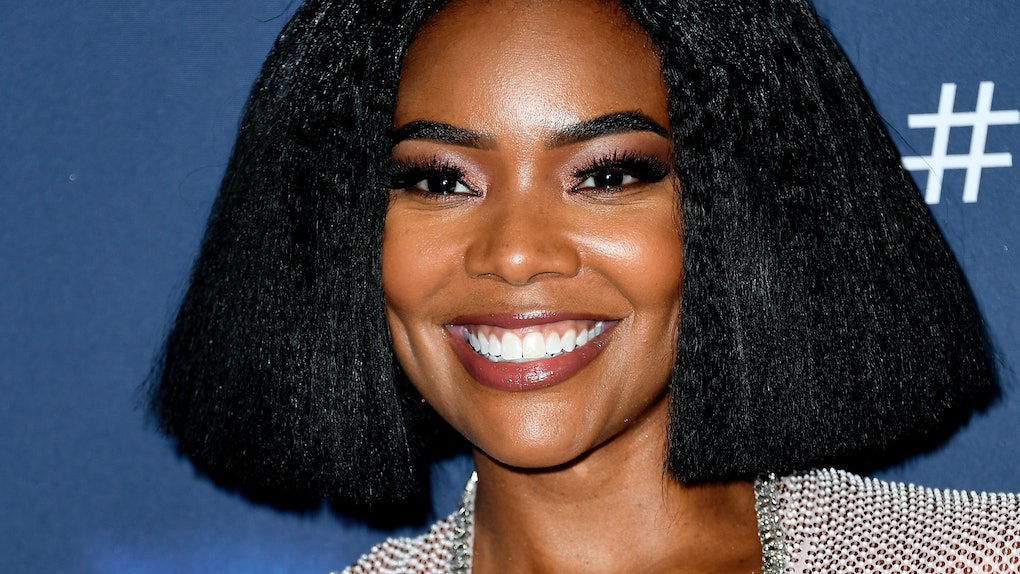 "Brr, it's cold in here. There must be the cutest, baby Clover in the atmosphere!" Seriously though, Gabrielle Union's photo of Kaavia in a Clovers uniform is Bring It On perfection.

Gabrielle Union was a co-star in so many '90s and 2000s classics, like Ten Things I Hate About You, She's All That, and one of the best cheer movies known to man: Bring It On. The movie spurred the release of five more spinoff movies, including 2006's Bring It On: All Or Nothing which saw Solange Knowles (yes, Beyoncé's sister) go head-to-head with Hayden Panettiere and 2009's Bring It On: Fight To The Finish starring Christina Milian. Talk about the glory days of straight-to-VHS movies. Anyway, Union was in the film that started it all and now she's inspiring a generation of tiny tots.

On Sept. 27, Union posted two adorable photos of herself holding her daughter Kaavia. The 10-month-old is wearing a bite-sized East Compton Clover costume, nearly identical to the one Union wore in Bring It On and I'm screaming. However, the "Clover" insignia was replaced with "Runza," which is not a school mascot, but rather, a restaurant in Nebraska. That's the actor's home state.

It appears as if the establishment had the tiny cheer outfit made specially for Kaavia since Union captioned the snap, "Bring it!!!!! Thank you @runzarestaurants for @kaaviajames Runza Clovers outfit to kick off her very 1st visit to #Nebraska." Honestly, such a thoughtful idea. It's also a brilliant marketing ploy because guess where I'm going to eat whenever I get to visiting Nebraska?

Anyway, the nostalgia-inducing post clearly took fans back. They were "bringing it" in the comments section. "Omg she’s ready to star in the baby remake I stannnn," wrote one fan. "THE CLOVERS FIT!!!! THIS IS A MOMENT!!" wrote another. "Epic. wins theee cutest award!" commented another.

Two additional sweet snaps were posted on Kaavia's own Instagram account. The first shot is such an adorable close-up of the tiny cheerleader. As for the second shot, I'm pretty sure Kaavia got a glimpse of herself in the mirror and realized she is working that costume. Look at here eyeing her reflection. So cute!

On Sept. 28 Union and her husband, former basketball star Dwayne Wade, appeared on ESPN's College Game Day at the University of Nebraska. Union was the special guest picker.

In speaking to ESPN, Union was asked when she became a Nebraska fan. "At birth. If you are from the state of Nebraska, you are a born Cornhusker fan. Them the rules," she hilariously said to the reporter.

"So the question is, now are you a Nebraska fan," the reporter turned to Wade. "I am, per our pre-nup," he jokingly responded as Union laughed next to him. I can tell these two must have the best time together.

Union and Wade both wore Nebraska Cornhuskers sports gear, though Union's jersey held a very special meaning. She donned jersey number 65, which is the number Cornhuskers offensive lineman Christian Gaylord wears. His father, who wore the jersey every game day, was killed in a car accident the week before. Aww... that was so sweet of her.

I just love how she went back home to support a hometown team to help them officially "bring it on" with her family.