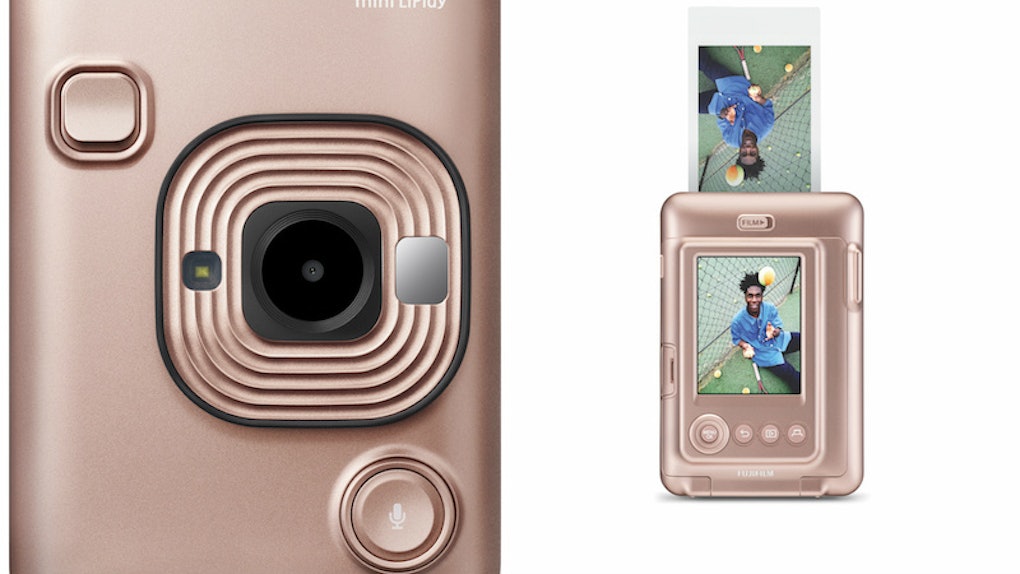 This goes without saying, but instant cameras are pretty dang popular right now. Sure, taking digital photos and editing them on your phone is fun — but there's something special about having a candid photo on demand. If you're someone who likes editing their pictures and owning physical copies of 'em, then you might like Fujifilm's new Instax Mini LiPlay camera. The hybrid device lets you take photos, edit each one, and then print them straight from the camera itself. On top of that, it lets you add sound recordings to coincide with any picture you develop. It basically merges two generations into one with retro, yet futuristic technology. I'm so on board.

Let's take it from the top. If you already own one of Fujifilm's previous instant cameras (like the Instax Mini or the Instax Wide), then you have an idea of how the camera dispenses its photos. It's quick and easy — but the company's Mini LiPlay holds extra features that'll make those pictures even more unique when they come out. Instead of snapping a photo and guessing what it's going to look like after it develops, you'll be able to select which photo you want to print on the Mini LiPlay's rear-facing LCD screen. That way, you'll know exactly what it's going to look like.

TBH, that'll probably save you a lot of money on film.

While I'm on the topic of the LCD screen (pictured above), let's talk about more camera features. After you've decided which photo you want to print on the spot, you'll be able to edit that picture using one of six filters, per Fujifilm. On top of those filters, you'll have 30 frame options to choose from before you start printing. In other words, each photo will be Insta-ready by the time you're done editing it. Get ready for major "likes" (IRL, of course).

There's one more feature that I really want to talk about, and that involves sound. Believe it or not, the Instax Mini LiPlay lets you record 10-second audio clips for every photo you take (it's futuristic AF). Apparently, after you record a sound clip for your fave photo, it'll be turned into a QR code, per Fujifilm. Then, that QR code will be printed onto the corner of your personalized pic. When it's printed, you'll be able to scan that code with your smartphone and listen to the recording. It's a really special way of capturing the moment visually and audibly.

In addition to editing and recording capabilities, the new instant camera also lets you print photos straight from your smartphone, thanks to good old Bluetooth technology. It even lets you hit the shutter button from your phone, which means you don't have to round everyone up and race the timer anymore.

If you're totally sold on the camera (same), then you can purchase it starting on June 14, 2019. You'll have three colors to choose from, including Elegant Black, Stone White, and Blush Gold. All of them are going for a suggested U.S. retail price of $159.99, so decide which option you want and start planning your next photoshoot.