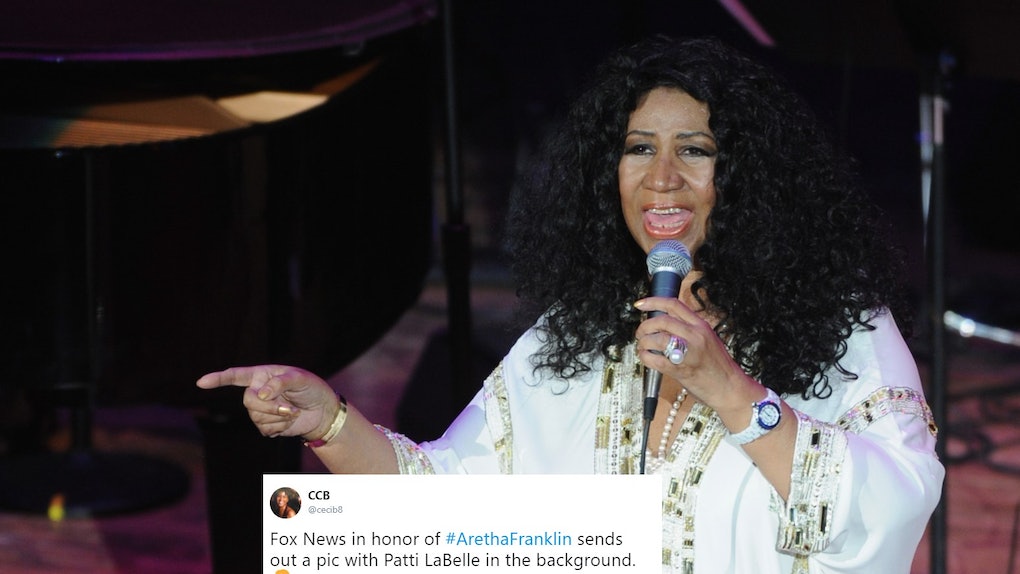 Fox News has come under fire yet again, this time for its tribute to the late Aretha Franklin who passed away on Thursday, Aug. 16. During a lengthy tribute broadcast, Fox News honored Franklin by mistakenly using an image of Patti LaBelle, another African-American singer who hails from the same generation as Franklin. The photo error in Fox’s tribute to Aretha Franklin was spotted by an eagle-eyed fan who then took to Twitter to call them out.

In Fox’s tribute, the photo of LaBelle was overlaid on the corner of a photo of Franklin. Given that the two music legends look nothing alike, the error is especially perplexing.

The fan who spotted the error posted a screenshot of the odd photo and tweeted, “Umm, is that Patti LaBelle in the corner?”

The tweet has gone semi-viral thanks to the thousands of likes and retweets it’s gotten.

Fans are obviously not happy about the mistake and are making their opinions known on social media. Some fans have even cited Fox’s alleged racism as the main factor in the situation, while others have used humor to diffuse their frustration. All in all, fans of the Queen of Soul are outraged that a well-known news network could get their facts so, so wrong.

Here’s how fans are responding to the unfortunate situation:

Needless to say, this sad situation became political real quick. Not only that, but it also became a bit of a nightmare for Fox News. They issued an apology for their error. In a statement issued to The Wrap, Fox News apologized to Franklin’s loved ones for using the mistake.

“We sincerely apologize to Aretha Franklin’s family and friends,” Jessica Santostefano, Vice President, Media Desk at Fox News explained to the TheWrap. “Our intention was to honor the icon using a secondary image of her performing with Patti LaBelle in the full screen graphic, but the image of Ms. Franklin was obscured in that process, which we deeply regret.”

For die-hard fans of Franklin, Fox News’ apology rang hollow. And again, the fans took to social media to express their dismay at the level of disrespect shown to Franklin:

As for LaBelle, she’s stayed mum on the mistake so far. However, she did tweet a statement acknowledging the loss of Franklin and essentially putting to rest her long-standing feud with the singer.

“I am deeply saddened about the passing of the Queen of Soul and my sister in song, Aretha Franklin,” LaBelle wrote. “Today the world has experienced a tremendous loss. Aretha was a rare treasure whose unmatched musical genius helped craft the soundtrack to the lives of so many. My sympathy, love and prayers go out to her family, loved ones and fans around the globe.”

It’s a tremendous loss, indeed. Franklin passed away on Thursday, Aug. 16, at her home in Detroit after a long battle with cancer. She was 76 years old.